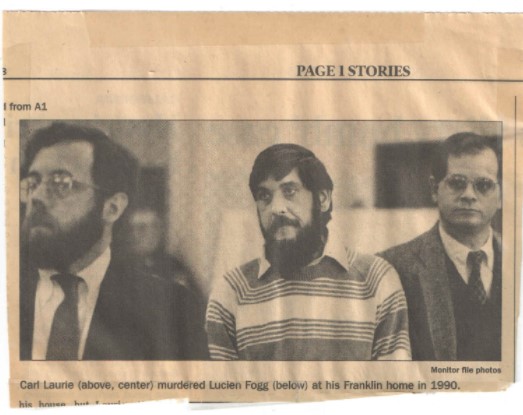 Convicted murderer Carl Laurie, center, is pictured with his defense team, Albert E. Scherr, left, and Jim Moir, in a Concord Monitor newspaper clipping. Laurie was convicted in March of 1990 of killing Lucien Fogg, but his conviction was overturned because of undisclosed favorable evidence.

CONCORD – Attorney General John Formella released his second compliance report Friday required under the new state law that is supposed to make public the names of police or former officers who have been disciplined for dishonesty or excessive force.

And while Formella implements a new law intended to finally make public the names of officers on the list, one prominent defense attorney says it is so late in the game that the state now expects criminal defendants who were victimized by the system to somehow solve the problem.

Concord defense attorney Jim Moir said the state continues dragging its feet on making sure all criminal defendants for the last three decades were told if the police officer testifying against them had been disciplined for credibility or excessive force issues as constitutionally required.

“What’s happening right now is purposeful obfuscation, and the opposite of transparency,” Moir said of the new law and its implementation.

The attorney general’s compliance report, which is required under the new law, showed that of the 265 names on the current Laurie List of dishonest police, 174 police or former officer names have now been made public.

Ninety-one names remain redacted either because they have filed a lawsuit as allowed under the law or haven’t been reached by the attorney general.
Formella’s report said 72 officers have notified his office that they filed lawsuits allowed under the law to argue confidentially in Superior Court why their names should be removed before being made public.

The numbers don’t include the 30 names the attorney general has removed from the list using an internal protocol since 2018, half of them since the new law went into effect Sept. 24, 2021.

“What needs to happen is get some defendants out there and reverse some convictions. The state is suffering zero. They just drag their feet,” Moir said.

He believes there are many defendants who were convicted after trial in part based on the testimony of police officers whose credibility issues were not disclosed as required by the Constitution.

“Now these names are being disclosed, I have no idea as to whether prosecutors were complying at the time it was important. These defendants should come forward to challenge their convictions because that appears to be the only way the system can be made honest,” Moir said. “We are putting the entire onus on making the system just on the very people who were victimized by the system.”

In 38 years of practicing law, Moir said he has received Laurie notification in only one case.

Moir was also the attorney who represented convicted murderer Carl Laurie, after whom the Laurie List was named. Laurie’s murder conviction was overturned in 1995 after Moir learned that prosecutors in the case knew the lead police investigator had known credibility issues and withheld that information from the defense.

Tuesday’s Release
On Tuesday, Formella publicly released the second round of names on the list showing at least four former police chiefs were on it.

Police chiefs are responsible for turning over the names of Laurie listed officers to the attorney general and before 2017, to their local county attorney.

Officers must be placed on the list if they have sustained discipline in their confidential personnel file for dishonesty and excessive force issues.

Former police chief John Seusing of Nashua was placed on the list for “unknown” reasons.

James Burroughs, the former chief in Newport, was listed for an “excessive force” incident in 2001.

The two police chiefs still in their positions whose names were released in the late December list are David Ellis of Troy and Shaun O’Keefe of Lyme, both for “truthfulness.”

The Friday compliance report included the latest Laurie List, now called the Exculpatory Evidence Schedule, but even the latest release contains very limited information about why the officers were placed on the list.

The report said the Superior Court has decided to file all the lawsuits seeking to get off the list under seal using the pseudonyms John or Jane Doe.

The report said the attorney general was redacting court case information on the list including case name and jurisdiction as a result.

“We continue to seek clarification from the superior courts regarding the sealing of these cases and will release additional case-related information as permitted by the courts,” Formella wrote, using the same language as stated in his Jan. 15 compliance report.

The new law RSA 105:13d is the result of a compromise between ACLU-NH, five news outlets and the attorney general to settle a lawsuit seeking the names of all officers on the Laurie List which included 281 names at the time.

ACLU-NH and five of the news outlets have withdrawn from the lawsuit, but it continues in Hillsborough Superior Court South with the New Hampshire Center for Public Interest Journalism, which publishes InDepthNH.org, as the sole remaining plaintiff.

All of the motions have been filed in that case. It is now up to Judge Charles Temple whether the Laurie List will become public in its entirety.

Andru Volinsky, representing the New Hampshire Center for Public Interest Journalism, previously said: “The state relies heavily on the new statute to argue for dismissal, but their own conduct shows the statute is not the exclusive method to list or remove officers from the list, and the use of the statutory procedures is completely discretionary.  We’re hopeful that the judge will schedule a formal hearing.”

Solicitor General Anthony Galdieri, representing the attorney general, previously said: “Because the New Hampshire Center for Public Interest Journalism v. DOJ matter remains open and pending in court, our office has no comment on it at this time and relies on the pleadings it has filed in this matter.”

Temple originally ruled the Laurie List is a public document, but the Attorney General’s Office appealed to the state Supreme Court, which agreed it is public, but sent it back to Temple to determine if the officers on the list have privacy rights, which is where it stands now.

Criminal defendants are constitutionally guaranteed all exculpatory evidence, which is evidence that would be favorable to them. That could include a police officer’s discipline for dishonesty, use of excessive force or mental instability that required their name to be placed on the list.

The full list is critical to criminal defendants who were convicted but were not aware that an officer testifying against them had undisclosed exculpatory evidence in their personnel file.

If criminal defendants find out after their conviction that such evidence existed and wasn’t disclosed, they can seek a new trial or ask that the charges be dropped altogether.