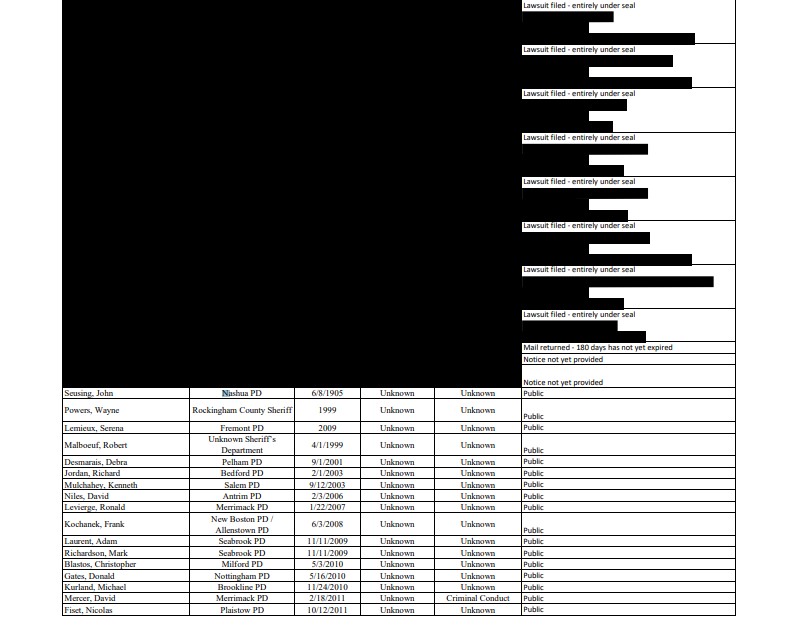 Portions of the Exculpatory Evidence Schedule, also known as the Laurie List of dishonest police, was made public for the first time in late December when Formella released the names of about 90 officers. Tuesday’s list includes 265 officers in total, though the names of 91 are blacked out pending either a notification or a Superior Court ruling.

There are four former police chiefs named for the first time on Tuesday’s list.

The new names on the list includes former Nashua Police Chief John Seusing, though the date and reason for placement is listed as “unknown.” Seusing was investigated in 2013 after retired officer Tony Pivero accused him of fabricating a police report in the 1980s following a bar fight. The Attorney General’s review of the records did not result in charges against Seusing, but he was found to have lied to superior officers about the incident and disciplined. The Attorney General’s Office said at the time that Seusing’s name would be placed on the Laurie List.

Julian was part of the SWAT team that engaged in a 2008 shoot-out with Anthony Jarvis in Charlestown. Jarvis died during the incident. Julian also had his police certification suspended in 2020 due to a domestic violence allegation, but was reinstated after the charges were dropped. He’s currently a part-time officer in Springfield.

Former Weare Police Chief John Velleca is on the list for “criminal conduct.” He resigned his post in 2014 after he was accused of domestic violence by a department administrative assistant.

Former Claremont police officers Mark Burch and Ian Kibbe are on the list for “criminal conduct/falsifying records.” Kibbe and Burch pleaded guilty in 2019 to charges they faked evidence in order to conduct an illegal search at the home of a Claremont man, Christopher Ratcliffe.

Prosecution for dozens of criminal cases the two officers worked on were dropped as a result, and the city would go on to settle with Ratcliffe for $75,000.

The state also changed a determination on a deadly 2016 shooting involving Kibbe. The New Hampshire Attorney General’s Office originally found that Kibbe was justified for shooting and killing Cody Lafont. Kibbe was the only witness to the shooting. After he pleaded guilty in the Ratcliffe case, the state reinvestigated Kibbe’s actions during the shooting and determined they could not consider it justified. However, the Attorney General’s Office declined to bring charges, saying that Kibbe could still argue self-defense.

Also on the list is former Weare Police Sgt. Kim McSweeney, who allegedly crashed her cruiser in 2015 and then tried to get a town firefighter to help her cover up the crash. Court records in a right-to-know lawsuit indicated McSweeney tried to get the firefighter to cut the brake lines in the cruiser after she was in an accident.

Officers who are on the Laurie List are able to challenge their placement in court under the law passed last year in response to a lawsuit brought by the New Hampshire Center for Public Interest Journalism, the non-profit that publishes InDepthNH.org, ACLU-NH and six other news outlets. ACLU-NH and the six other news outlets have since withdrawn from the suit, which is still pending before Hillsborough County Superior Court Judge Charles Temple.

The New Hampshire Center for Public Interest Journalism contends the new law doesn’t truly protect the public’s right to know which officers are on the list. The law says the Attorney General will make the list public after officers have the chance to file a lawsuit, but doesn’t require it to keep the list, and 30 officers have already been confidentially removed by internal protocols.

The list has long been kept secret. The attorney general started keeping a statewide list in 2017 based on information from the state’s 10 County Attorneys and police chiefs from around the state.

Under the terms of the U.S. Supreme Court’s Brady v. Maryland case more than 50 years ago, the names of officers with sustained discipline for credibility or excessive force issues in their confidential personnel file would have to be disclosed to defense attorneys, but their identities would otherwise be kept hidden from the public.

Prosecutors must provide such evidence about police discipline to criminal defendants if it is considered exculpatory, or favorable to the defendant involving dishonesty, excessive force or mental illness.

The dates of the triggering incidents do not appear to be accurate, and many seem to have been added in 2017 and 2018, when departments were required to audit their internal lists and turn the names over to the Attorney General’s Office.