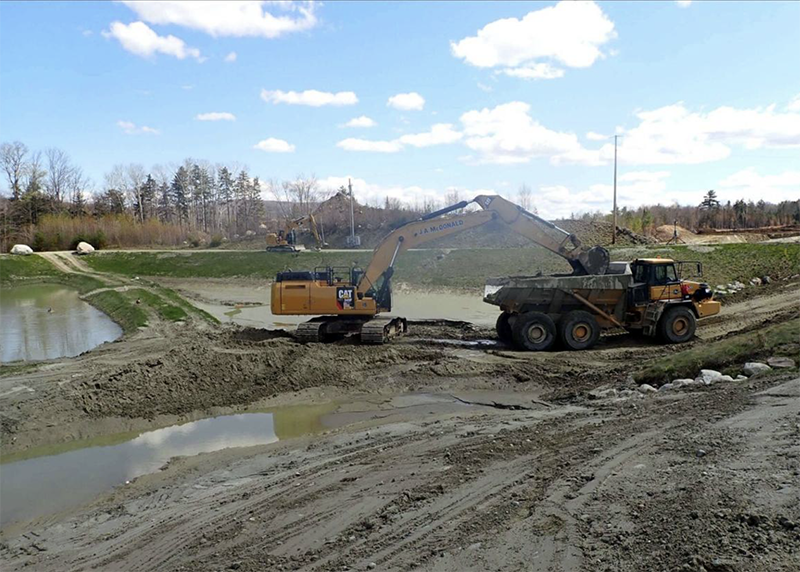 RUTLAND, Vt. — Joe Fusco, vice-president of Casella Waste Systems, Inc., said the company is “committed to fighting” legislation that would prevent it from opening a landfill in Dalton, New Hampshire.

The New Hampshire Legislature has passed a number of bills relating to landfills, and one piece of pending legislation, House Bill 1454, would establish setbacks that the Dalton site could not meet.

However, it is unclear whether the legislation, if passed, would apply to an existing application.

“I’m not an attorney,” Fusco said, “but I don’t know how those [laws] would stand up to a legal challenge. … It’s like spot zoning.”

Adam Finkel, a Dalton resident who opposes the landfill, disputed the comparison with spot zoning. Quoting a court decision in Miller v. Town of Tilton, Finkel shared, “Often, this phrase is improperly used to frighten municipalities away from land use controls that would have a positive impact upon the community if implemented. … An area is spot zoned when it is singled out for treatment different from that of similar surrounding land which cannot be justified on the basis of health, safety, morals, or general welfare of the community and which is not in accordance with a comprehensive plan.”

“I see no difference between 1454 and anything that legislatures do every day,” Finkel said, “like you can’t have a nuclear plant in an earthquake zone. You can’t put a tavern next to a kindergarten. That’s not zoning, that’s public health and public policy, period.”

Furthermore, he noted that the state already enforces a 200-foot setback. “It’s just a matter of degree,” he said.

Jon Swan, founder of Save Forest Lake, said, “The heart of bipartisan House Bill 1454 is the science behind updating the archaic and arbitrary state setback requirement, which is currently only 200 feet, for the safe and proper siting of new landfills near New Hampshire bodies of water. HB 1454 would utilize site groundwater flow rates to determine the travel time of contaminants from a landfill failure to reach a nearby body of water.”

Swan said the proposed landfill site “is a very poor and dangerous location for a large, multi-generational landfill development,” adding, “I don’t believe the bully tactics and threats of lawsuits from Mr. Fusco will dissuade our State Senate from its duty to protect the Granite State, its environment, natural resources, tourism, and outdoor recreation industries, and health and safety of its citizens, by passing HB 1454.”

Asked about a contingency plan if the company cannot proceed with its Dalton landfill, Fusco said, “We don’t have any other sites in mind. You know, after an extensive research and engineering process, we’ve identified that parcel in Dalton as probably the best-suited, hydro-geologically and for a lot of other reasons that are both technical and engineering-related as being the preferred site for us.”

Finkel said, “I’m an environmental scientist, not a hydrogeologist, but I certainly know enough that, if I was working for Casella and I got a call from [landowner] Doug Anderson four years ago and he said, ‘Come on by, I want to show my land, and maybe I’ll sell it to you for a landfill,’ and you come around the corner on the way down [Route] 116, and you see this gigantic illuminated sign that says Chick Sand and Gravel … the team of Casella people should have stepped on the gas and driven right by and called him up and said, ‘Are you nuts?’”

Casella’s own studies have shown that groundwater flows through the site at 6,000 feet a year, or 16 feet day. The landfill would be only 2,800 feet from Forest Lake, so any contamination would reach the lake quickly, Finkel said.

Fusco said, “The other option, of course, always is if we’re able to somehow achieve or negotiate an expansion of the Bethlehem landfill in the future.”

Pressed about other options for the company should it not get the permit for a landfill in Dalton, Fusco said Casella would have to figure out what capacity it could offer for New Hampshire waste in other states. There is a Waste Management landfill in Norridgewock, Maine, that Casella might contract with, and Casella has some facilities in upstate New York that might have enough capacity, he said.

“But that’s 200 to 300 miles one-way,” he said. “If we could find the capacity and New Hampshire towns were willing to pay the increased costs of shipping it, and spewing carbon into the atmosphere — the carbon footprint of shipping things long-distance is significant and has its own environmental effects — then, perhaps, that would be an outcome.”

Fusco said there is a need to reduce the amount of solid waste that goes into landfills.

“If you step back and look globally, you would say that, certainly over the past 40 years and if you could predict out into the next 40 years, you would say that our ability to do different things with what we would consider waste now, that converts them into a resource, we’re getting to a place technologically in society where less and less stuff is waste and more and more stuff is either recyclable or somehow renewable,” he said.

Moving away from landfills cannot happen overnight, though. Fusco said, “You could look at the importance of landfills on a slow, long-term slope down to where perhaps you could imagine a future where we didn’t need landfills. But right now, for this generation, and probably one more generation, I would say that disposal capacity needs to be an integral part of the planning process.”

Fusco said that Casella already plays a significant role in recycling, currently handling about a million and a half tons of recyclables annually. Its Bethlehem, New Hampshire, landfill, in partnership with Rudarpa, Inc., has established a renewable natural gas processing facility that converts the methane gas produced by the landfill into a commodity that can power generators and produce electricity.

“Methane is 26 times more potent than carbon dioxide as a greenhouse gas,” Fusco said, “so our business philosophy is we want to have a zero-emissions landfill. We do that primarily by working with energy companies to find a higher use for that methane that comes off the decomposition of waste.”

Fusco said one of the biggest, fastest-growing parts of Casella’s business is working with large manufacturers such as Dupont and Becton, Dickinson and Company to identify what they can do in their manufacturing processes to avoid waste entirely.

Casella currently operates a recycling facility in Charlestown, Massachusetts, but Fusco said the company wants to build one in Manchester, New Hampshire.

“A lot of New Hampshire recyclables wind up getting exported to other states and other facilities,” he said. “If New Hampshire became a place where it was more economically viable, meaning shipping it shorter distances to an in-state facility, you might spark a kind of growth in recycling in the state of New Hampshire.”

Saying that building additional landfill capacity is what gets the attention, “we’re also suggesting that there be additional recycling capacity being built as well,” he said.

North Country residents who oppose the Dalton landfill say there is enough landfill capacity in the state to handle New Hampshire’s waste, but out-of-state trash is diminishing that capacity. Private companies are prevented by the Interstate Commerce Clause of the U.S. Constitution from refusing solid waste from other states, but that provision does not apply to state and municipal entities.

The Mount Carberry landfill in Success, New Hampshire, is operated as regional solid waste facility by local communities, so is not bound by the Interstate Commerce Clause. An expansion of that facility is pending before the state Department of Environmental Services.

Fusco said that accepting out-of-state waste helps to keep New Hampshire’s solid waste costs down, but beyond that, he sees solid waste as a regional issue that does not conform to state boundaries.

He noted that communities used to have their own town dumps, but “we changed the regulations because that’s not the way to dispose of waste, in an open quarry; so we created a regulatory structure that made landfills very, very sophisticated technologically, and also very, very capital-intensive. They need to be a certain scale and size, and they need to be able to serve a certain radius around them in order to make that capital investment economically sustainable. … I question whether that is a core competency of local governments, to understand how to make a facility like that run well.”

Asked about Casella’s record of accidents and permit violations at its Bethlehem facility, Fusco said the question is about context.

“These are issues anyone would face,” he said. “We don’t wish they would happen, but sometimes they happen, and we always clean up, remediate, or anything we need to do, and work closely with regulators, and there’s never any direct harm to any environmental resources at all.”

Last May’s accidental release of effluent, he said, happened when an alarm on a tank failed and it overflowed. “All of it was captured in a retention pond, built as a backup for that very type of rare event,” he said. “None of it found its way off-site, and none of it found its way into the environment. We were able to recapture that and clean it up.”

The company has received an extension of its deadline for obtaining a wetlands permit for the Dalton landfill, and Fusco said the company is delaying applying for local permits until that is accomplished.

“Landfill siting and permitting is a long process,” he said, “and I don’t think we’ve reached that point yet. You begin to have conversations with a local government and you talk conceptually about things, but the time for formal permits and applications for certain things happens in a certain order, and that’s a little bit down the road.”

He said withdrawing the initial wetlands application was intended to align with the application it must make the U.S. Army Corps of Engineers.

“We didn’t want to duplicate our efforts and the regulators’ efforts,” he said.