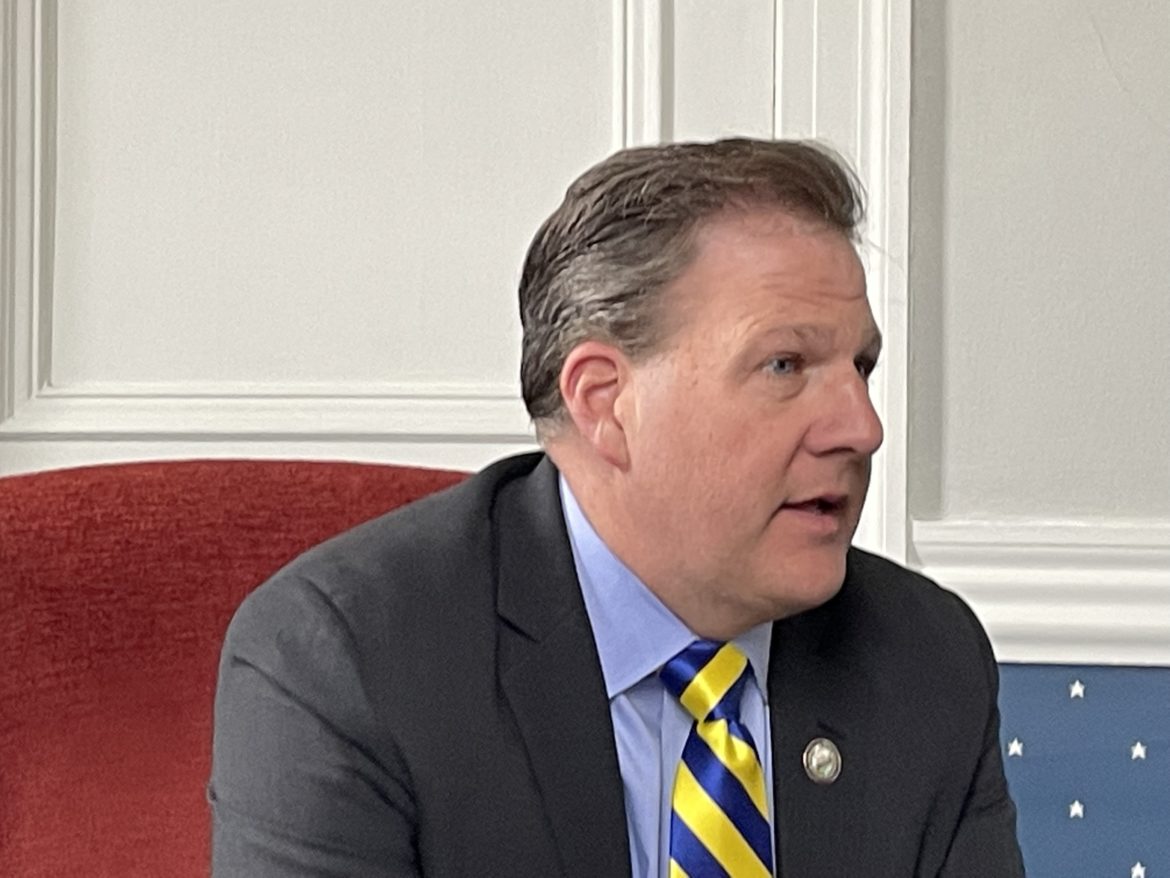 Gov. Chris Sununu at a recent press briefing in this file photo

BY PAULA TRACY
CONCORD – Gov. Chris Sununu wants the legislature to consider a gas tax holiday for everyone, not just people who register their car in New Hampshire, but everyone who pulls up to a gas pump here.

He says it would give drivers a 22-cent a gallon break for a couple of months whether they live here or are just driving through.

“I’m hoping they will take it up,” Sununu said. I think it would be a huge win. I think there is an expectation on the state level to do it. We have a very strong economy, we have surpluses, we have a great rainy-day fund.”

At the press roundtable after the Executive Council meeting Wednesday, Sununu said there is a variety of ways to fund it.

“There’s just a huge opportunity to say ‘look, Washington has screwed it up but New Hampshire is going to do what it can to push back and give some type of reprieve.’ My idea is that it has to happen at the pump,” Sununu said.

The House Finance Committee is considering an amendment on a bill that would give all owners of New Hampshire registered vehicles a $25 rebate check in the mail to help with rising gas prices under a non-germane amendment to House Bill 1661.

It would have to be approved by the House and the Senate and signed by the governor to go into effect.

Legislators were told there are approximately 1.6 million registered vehicles that would be eligible for receiving the checks, including trailers and motorcycles and it would cost about $40 million.

The money would come from the state’s general fund as a one-time rebate not from the state’s highway fund, said state Rep. Karen Umberger, R-Conway, who laid out the plan with Republican House Speaker Sherman Packard.

Sununu prefers giving everyone a gas tax break for a while as the average price at the pump is now $4.19 in New Hampshire and expected to stay high during the summer driving season due in part to the war in Ukraine.

Sununu said giving everyone at the pump a break could drive out-of-state folks over the border to New Hampshire and tourists as well, noting that they come and buy other items which help the state’s economy.

“I’m always up for a good tax cut,” Sununu  said. “Do it now in April and in May. Twenty-two cents right off. Other states are doing it,” he said, noting Maryland and Georgia and other states are considering it.

The Boston Herald had an editorial, recently suggesting Massachusetts pump the brakes on a gas tax https://www.bostonherald.com/2022/03/10/editorial-give-us-a-break-suspend-the-gas-tax/.
“You don’t want to get left behind in that,” Sununu said. “I am not saying we could make all the money back but we can afford it, and it is the right thing to do by the citizens…I’m just begging the legislature to step up and join me and give us some type of reprieve.”