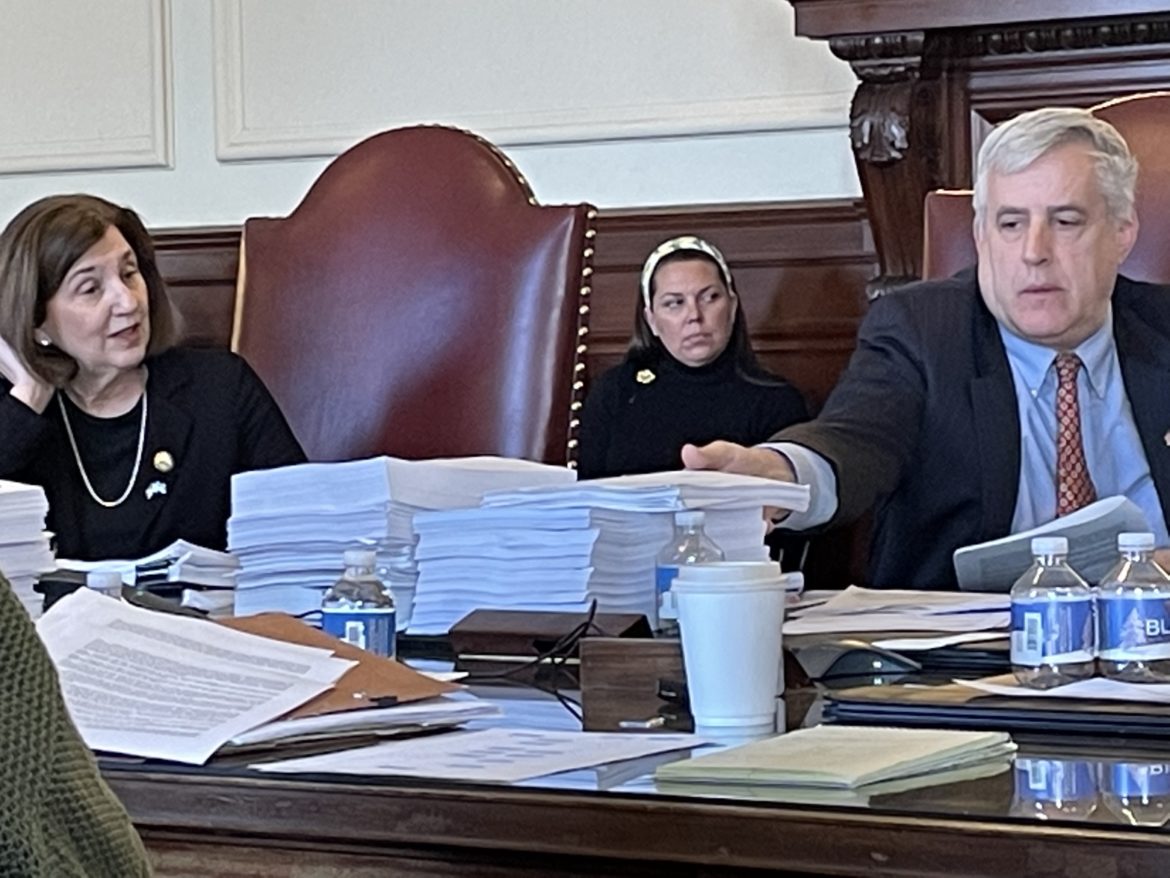 CONCORD – Pamela Smart’s request for a commutation hearing on her life in prison accomplice to murder conviction was unanimously rejected by the state’s Executive Council Wednesday.

The Council also approved $23 million for the development of a veterans campus in Franklin, approved funds for better pay for public defenders, and gave the nod for financing a new, $16 million indoor shooting facility and conference center at Sig Sauer in Epping among other action.

In her request, the 54-year-old former Derry resident apologized for the first time for “my actions and terrible judgment…I offer no excuses for my behavior 31 years ago and I assume the blame for all the pain that resulted,” she wrote noting it is “a burden I will carry for the rest of my life.”
Smart has been in prison in Bedford, N.Y., for most of the past 30 years for orchestrating the death of her husband Gregg Smart. He was shot to death in the Derry condominium the couple shared in 1990,

A jury found that Pam Smart enticed her teenage lover and his friends to kill her husband and make it look like a botched robbery.

The men who carried out the slaying as teenagers have all been released from prison, but Smart was sentenced to life without parole.

Smart wrote that she regretted that she had not apologized sooner.

“For many years I blamed others for my incarceration because I was immature, selfish, and proud and it took far too long for me to recognize my own role in Gregg’s murder,” she wrote.

With about 180 letters of support in the file, some dating back almost 20 years and used in past failed efforts for a commutation hearing, she said she has grown and changed and found a more personal and deep relationship with God.
“It is my sincere hope that my words will promote healing in your lives,” she wrote.
In prison, she has earned her doctorate in ministry.

Senior Assistant Attorney General Jeffery Strelzin objected to the request as did Tina Nadeau, chief justice of the Superior Court.
Strelzin said it is unclear to him what Smart was admitting to in her new request. Neither family attended the meeting.

Strelzin wrote that pardons and commutations are “an act of executive grace” and should be reserved for those very rare cases where the circumstances are exceptional and justice absolutely requires overturning a jury’s verdict or a judge’s decision, such as when there has been a clear miscarriage of justice.

“This case is not one of those,” Strelzin concluded in his 54-page request for denial of a commutation hearing.

Executive Councilor Cinde Warmington, D-Concord,  thanked the Department of Justice and defense attorneys for their thorough efforts to explain their positions on the request, but in her first experience with a Smart petition, she sided with Strelzin and said that this case by no means raised itself to the level of a clear miscarriage of justice.

Also chiming in for the first time on a request for Smart was Republican Executive Councilor Janet Stevens of Rye, who said the damage done to Gregg Smart and his family is what she focused on.

After the unanimous vote against a hearing, Sununu, who has seen a number of such requests by Smart and voted against three of them as Executive Councilor, said nothing is new and that she continues to look for new approaches to get a hearing.

Sununu supported the Council’s decision and if they had agreed to a hearing, and had voted to support a commutation, he could essentially veto it as governor.

SIG SAUER GETS FINANCING
Arms dealer Sig Sauer of Epping got the green light to go ahead on a $16 million indoor shooting range, conference center, museum, shop, and different features with the state Business Finance Authority fronting the money for the land and construction, then leasing it, and paying the state back after 10 years.

James Key-Wallace of the NH Business Finance Authority said the deal for the Experience Center would allow for thousands of visitors to come to the region each year, including law enforcement and military who buy arms from Sig Sauer.

The structure of the transaction would be that the BFA will own and finance the facility; it will be leased to Sig Sauer, all the costs and at the end of the lease period, pay off all of the debt.

Councilor Stevens congratulated Sig Sauer for getting the project up and noted it would potentially add 50 to 65 jobs in her district. She asked about property taxes for Epping.

Officials said the plan is to pay in lieu of taxes equal to what it would be if Sig Sauer owned the property rather than the state.

They were told there is a potential to attract as many as 100,000 visitors a year from the new facility.

Executive Councilor David Wheeler, R-Milford, asked what liability the state would face by owning the property during the lease period.

Key-Wallace said there would be none, that the state would act as landlord and that Sig Sauer was insured.
He said his issue was that there are several hundred gun shops in the state who are not getting the guaranteed loan.

Sununu said any business in the state can apply for the money. The Council voted 4-1 with Wheeler opposing.

ENHANCED SALARIES FOR PUBLIC DEFENDERS
The Council unanimously approved a request from the Judicial Council to spend $2.3 million for enhanced salaries for public defenders.
The money would be available through June 2023 using general fund money.
There are approximately 800 indigent defendants including those incarcerated waiting to have an attorney appointed to their case as required by both state and federal constitutional law, the council was told.

There have been 36 who have resigned since the fiscal year 2021 citing low salaries and high caseloads, wrote Sarah T. Blodgett, executive director of the Judicial Council.

Councilor Warmington called it ‘shocking’ to see the burden on the public defender program right now, and said she wants to make sure the constitutional rights of citizens are protected.

The public defender program provides for lawyers free of charge to those who are not able to afford a lawyer.

Blodgett said, “we are in the midst of an indigent defense crisis” with not enough public defenders and this is slowing down the due process in the courts.

She said no single issue is responsible for the crisis but it has been growing and the pandemic had a significant impact.

During the pandemic, there was a decline in the number of arrests, but now there are new cases and because of backlog and attorney departures, cases linger for a longer period of time.

“Our attorneys have had to go to the jails to visit clients where there are outbreaks of COVID,” she explained.

Warmington said she while it was a bit of a “Bandaid approach,” she said she hoped that it was a bridge to future stability in the important program.

Blodgett said the request for the money was extraordinary and she noted this is a national issue right now and it does not have an easy answer or a short fix.

Sununu’s idea of using one-time federal funds through the American Rescue Plan Act to create a $23 million campus for veterans’ needs in Franklin was approved.

The vote was unanimous to support the creation of the new residential facility with Easter Seals operating the 15-acre facility it already owns in Franklin.

The conceptual plans call for 31 units of permanent housing and 30 respite/retreat beds for veterans and guests.

The goal is to provide a one-stop approach to veteran needs including wellness services, recreation opportunities, transportation and counseling, and behavioral healthcare.

Sununu called it a once-in-a-lifetime opportunity to use one-time federal funds to support the needs of veterans, some of whom are homeless and in need of many services.

Republican Executive Councilor Joe Kenney of Wakefield, in whose district the project is located, asked a number of questions and expressed concerns that it would somehow compete with the Tilton Veterans Home, which is run by the federal government.
Kenney said he was concerned about adequate funding and pay at the home.

Sununu said the issues of lack of staffing are similar to other parts of the country and that the facility would be complementary to the services in Tilton.

Councilor Wheeler wanted to know who would own the building?
Easter Seals would continue to own and operate it and the state would give the $23 million to them to develop the plan.

Sununu’s nomination of Brian C. Shaughnessy of Bedford to be a justice of the New Hampshire Circuit Court failed on a 4-1 vote.
Shaughnessy was criticized for his actions and advice to Bedford Town officials following the 2020 election in which almost 200 votes were not initially counted, but did not change the outcome.

The Attorney General is expected to complete an investigation on the matter in the next few months.
Warmington said she thought it was not appropriate to vote while the attorney general continued an investigation.

Attorney General John Formella said most of the work was done as it pertained to individuals but the election overview and errors made are the focus of what is left to be researched.

Kenney agreed to table and said he felt that Shaughnessey was “at the center of the issue of what went on in Bedford. I am willing to table it…i just think there are so many people who might not know the complete story.”

“When you place someone on the court system who is making judgments over people,” Kenney said, “the public needs to feel confident.”

Only Gatsas supported the nomination.

After the meeting Sununu said he planned to move on to other nominees and had no plans to renominate Shaughnessey after the attorney general’s report was completed.

Jacki A. Smith of Sharon, however, was unanimously confirmed to be a justice of the New Hampshire Superior Court.

Kenney said he liked her life story of humble beginnings, can-do attitude and said she enjoys great support among her colleagues.

“She is an inspiration to all, a triple threat,” said Stevens, agreeing that Smith was a good choice.

Sununu started the meeting with a proclamation for Red Cross month and urged residents to give blood.

He said one of the hardest things he does as governor is to give blood on TV but he noted he was a recipient and it could potentially be a life saver for many.

“There is a huge blood shortage across the nation,” he said.
Sununu noted that he received blood transfusions last Labor Day weekend when he became ill and was hospitalized with a bleeding ulcer.

“Last September I really needed it. Without those transfusions, I would not be here,” he said.
In addition, the Red Cross helps those who face fire and disasters with relief.
Stephanie Couturier, regional chief executive officer of the organizations, Northern New England Region and her staff attended the meeting to accept the proclamation.

ROUNDUP WITH REPORTERS
Sununu met with reporters around the Executive Council table for the first time since the pandemic and took all questions from about 10 reporters for almost 30 minutes, until they ran out of questions.

Sununu spoke about the Republican congressional redistricting map which he plans to veto and said removing competition is nothing anyone wants to see.

Other states have gone down that path and he said it would create the wrong atmosphere. Sununu said he put his own suggested map on the table.

He said Russian vodka needs to be rebranded before it returns to state liquor store shelves.
“It’s not bringing Vladimir Putin to his knees,” Sununu said, but keeping Russian booze off the state shelves is symbolic.