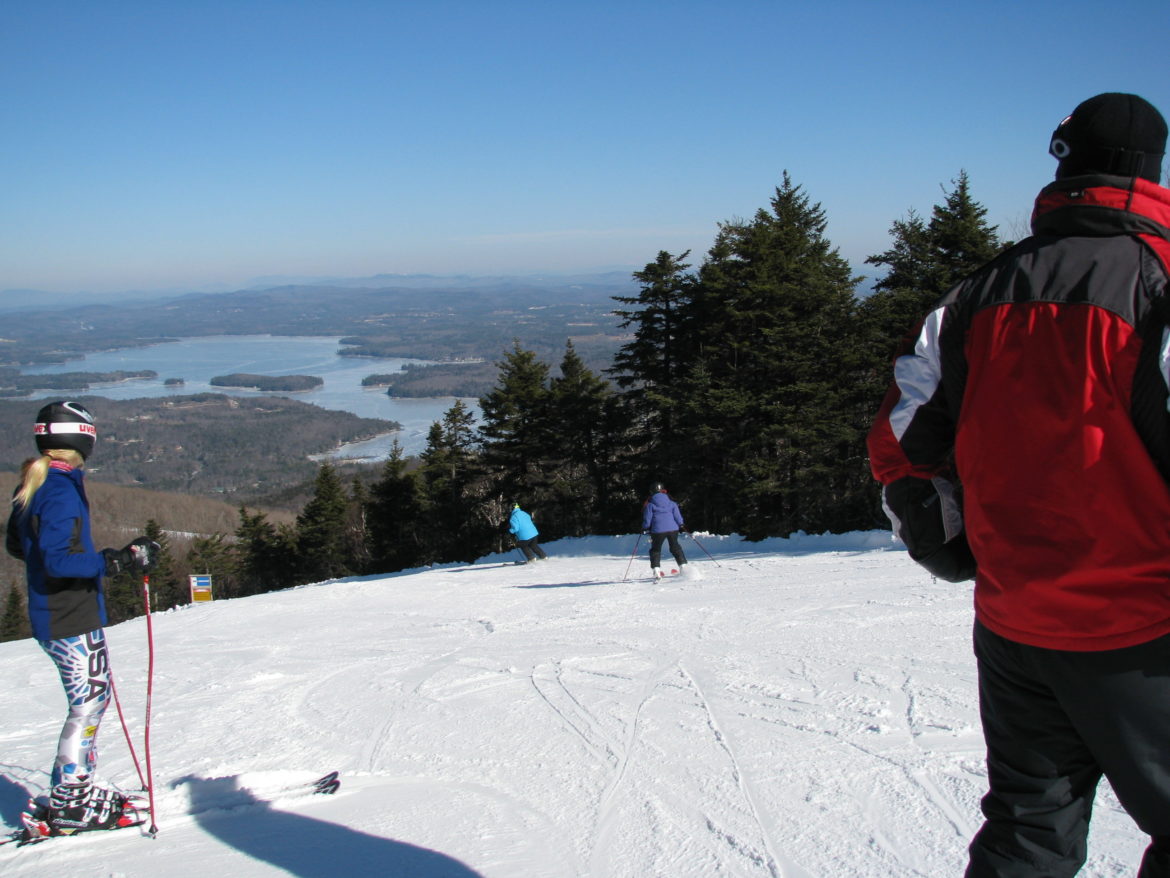 The view from Mount Sunapee is pictured in this file photo.

High volume traffic with skiers using Route 103 on weekend mornings and long lift lines at the resort have caused complaints that prompted his intervention.

Since 2018, the state has had a 20-year lease agreement with the Colorado-based corporation to operate the ski area, which is part of Mount Sunapee State Park in Newbury.

Vail owns and also operates Attitash ski resort in Bartlett, Wildcat in Pinkham Notch, and Crotched Mountain on the Bennington/Francestown line in New Hampshire. These resorts are newly part of its portfolio of almost 40 resorts across North America.

Sununu said customer expectations on holidays and weekends are not being met due to what he considers may be a case of overselling the product with season passes.

With weekend morning traffic often backed up on Route 103 for two miles from the traffic circle into Newbury and skiers and snowboarders walking in their boots and equipment along its breakdown lane, guests are finding when they arrive 40-minute lifts lines and there are petitions and complaints reaching the governor’s desk.

“They have to keep up,” Sununu said at his press conference Wednesday.

The company said Friday that it is working with the state on issues that range from parking to signage and notifications.

Adam White, spokesman for Vail said in an email “we are always listening to our guests and working to make improvements every day. Mount Sunapee faces some unique challenges in that the roads to access our resort are limited and lack public transit options beyond our own resort shuttles.

“We continue to evaluate our options in the short- and long-term, including expanded use of electronic roadside signage and increased messaging of arrival updates to guests using online and mobile resources. We will continue to share regular updates on our operations Twitter channel @SunapeeMT for our guests to track arrival considerations in real-time.”

White said Vail is using repeated, consistent messaging on social media to encourage guests to carpool and adjust their arrival times given how limited parking can be during peak time periods, and to use alternative parking locations and shuttle service to expedite arrival.

He added that season to date, visitation is consistent with last year.
A petition which has gone from about 600 signatories to almost 1,600 in a week is calling on Vail to be a better steward at the state-owned mountain and to provide a better operation and product.

A labor shortage exacerbated by a federal pull back on worker visas, weather conditions and pent-up demand to ski and ride due to COVID-19 and other considerations are also likely issues that have led to the long lines and traffic snarls, Sununu said, and he noted it is not exclusively a problem for Vail resorts.

This all comes at a time when ski areas are gearing up for February school vacation weeks, beginning Feb. 18.
The matter is now on the governor’s radar, that of the Attorney General’s Consumer Protection Division as well as the state Department of Natural Resources, which holds the 20-year lease to operate the state-owned ski area, said Commissioner Sarah Stewart.

She said they are all working closely with Vail to improve the experience.
Sununu, who himself operated Waterville Valley ski area before becoming governor, said he knows the state has an issue with Vail and its lease but he is limited to the terms of that agreement.
“I can’t tell Vail ‘you can’t sell this number of passes,’ I don’t think,” he said.

Sununu said he had heard from “some very upset customers, not just on Vail but passes have been massively sold and there is some argument that they were oversold,” he said.

He said he has heard of lift lines and traffic “creating a very poor customer experience and something we are paying attention to.”

He noted that since the Obama Administration, foreign worker visas have been drastically reduced in numbers and those workers were used to help out ski areas on a seasonal basis. He said he has been trying to work with the federal Secretary of Labor, at least the current secretary’s predecessor to “push for more” visas, but to no avail.

He said he will keep working on the issue, noting there will likely be 2022 summer seasonal labor needs.

As for Sunapee, he said, “we will keep working to provide a better experience. They have to keep up with the expectations of the customer and right now those are not being met.”

State Rep. Dan Wolf, R-Newbury, who has skied at Sunapee since 1955 and has been writing about the national ski industry for most of his life, said the issue is not just at Mount Sunapee but across the Vail operations network particularly and other pass networks.

The issue is overselling and having inadequate staffing, he said, or perhaps inadequate compensation for its workers.

Sales of these multi-mountain passes, by Vail and others “have turned the ski industry on its head,” he said changing them from being variable to fixed revenue operations.

The publicly-traded company Vail has lost stock value since national issues of overcrowding have popped up at other Vail resorts, he said.

That, combined with a worker shortage, lots of fresh snow, and COVID-19-crazed demand contribute to the problem, said Wolf.

Meanwhile, Vail has the money and a non-refundable clause on its passes.
However, they are being eyed by some attorneys across the country for a possible class action lawsuit.

Consumers with complaints have the Attorney General’s Consumer Protection Division to turn with complaints, while in other parts of the country, the non-refundable policy may be challenged legally.

There were social media posts recently showing long lines at Attitash, complaints that Crotched has reduced its days and hours due to labor shortages.

Meanwhile, ski areas across New Hampshire are almost 100 percent open in terms of terrain and see similar, unprecedented numbers of people on the slopes on weekends and holidays.

Some resorts limit their tickets and consider the number of trails and lifts they have open to create a comfortable carrying capacity, which is common in the industry, Wolf said.

The capacity issues need to be addressed upfront as the season is coming into its most busy time with February School Vacation weeks, President’s Day, and other group tours expecting reliable winter conditions.

In New Hampshire, unhappy skiers and snowboarders also have a political leverage option. In addition to consumer complaints, the state lease is a way to get Vail’s attention and that is what is intended by the petition.

Vail entered a contract with the state in 2018 and is in the fourth winter of operation under a 20-year lease with the NH Department of Natural Resources, Stewart acknowledged.

The legislature created enabling legislation to take the operation of Sunapee out of the state’s control in 1997.

The first, 20-year lease went to the Mueller family, former owners and operators of Okemo, Vt., and other resorts. The deal was that the state received 3 percent of net profits and a base minimum $150,000 lease payment per season, which has gone to fund improvements at the state-owned and operated Cannon Mountain in Franconia.

The Muellers sold their holdings to Vail and the state created a new contract as part of the sale.

Christopher White started a petition to NH Commissioner Department of Natural Resources which had 1,527 signers as of Thursday.

The petition states that “Vail Resorts has failed in their duty to be good stewards of an NH natural resource and our communities are suffering as a result. Under Vail’s command, Mount Sunapee is selling more tickets than they are capable of supporting from an operations standpoint.

The local roads, resources, and infrastructure are being excessively taxed as a direct result of their business practice. Cars at a standstill stretch miles in every direction from the traffic circle each weekend.”

“Patrons are walking in the roads with ski gear in excess of one mile to access the lifts in order to skip the lines. The lift lines exceed 30-45 minutes regularly. The mountain itself is very difficult to navigate due to the extreme number of skiers and creates an unsafe environment due to the unrestricted access to anyone with an Epic pass.

The lodge accommodations do not provide adequate room for patrons to access for warmth. This over-marketing and profiteering go beyond the scope of a good business model and if unchecked will be extremely detrimental to the surrounding communities.”

The letter goes on to urge the state to drop the contract for safety concerns.

Change.org also has a similar petition for Vail’s property in the state of Washington, known as Steven’s Pass in which long lines, limited terrain, parking problems also exist. There are 44,892 signatories to that petition which is similar.

Local news articles in the Seattle area indicate skiers and riders and consumer attorneys are looking at class action, though the terms of the sale of these season passes are non-refundable except in the event that a ski area closes for extreme situations.

A link to Mount Sunapee’s website https://www.mountsunapee.com/ shows no mention of the issues the governor said he was working on.

It does show that Vail will limit ticket sales during holiday periods and that there are refunds available when booking online.

Mount Sunapee does have an Advisory Commission and information about public comment and access can be found here https://www.nhstateparks.org/about-us/commissions-committees/mount-sunapee-advisory-commission.
Brent Wucher, spokesman for state parks said his office has been in close contact with Vail and local officials in and around Mount Sunapee to “work towards a solution to the challenges the large crowds bring.”

And a visit to the ski area Saturday at about 11 a.m. found no vehicles parked along the highways, lift lines at about 10 minutes, and most all of its parking lots full.

Skiers interviewed said they agreed that the product has been oversold. Some said the problems are focused primarily on the distant parking and traffic problems and not so many issues on the mountain where close to 100 percent of the terrain and lifts were open Saturday.