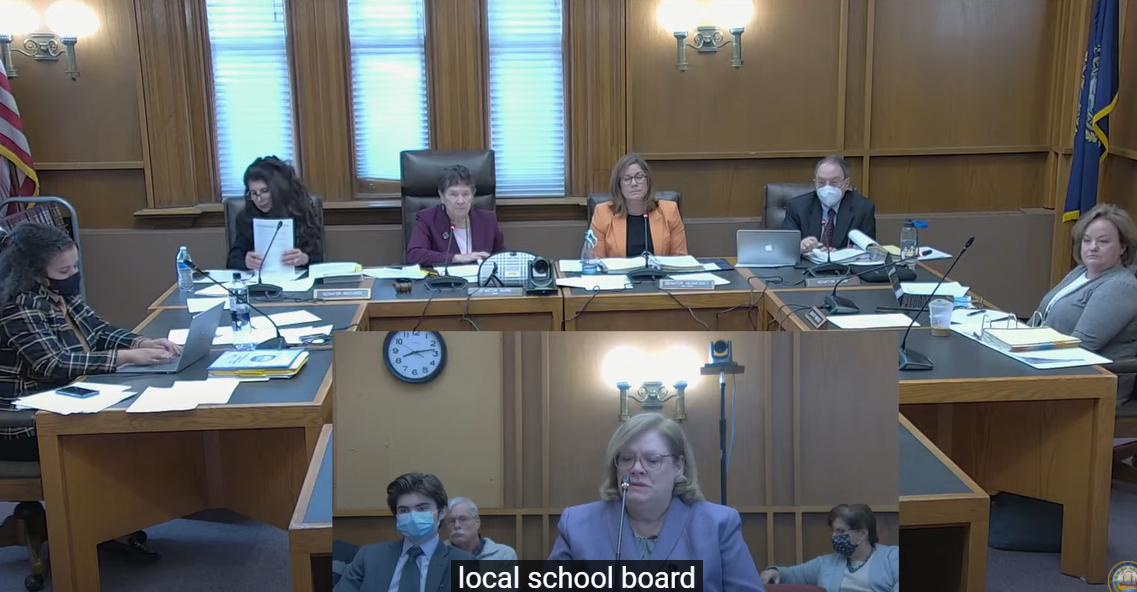 CONCORD – A bill was heard Tuesday by the Senate Education Committee that would require a thirty-minute public comment period at the beginning of all school board meetings.

Supporters said a structure for such civic discourse would be beneficial and “calm the waters” which have been pretty choppy the past few years with COVID-19 issues, mask mandates, plummeting academic scores, remote learning, and vaccination issues.

Sen. Sharon Carson, R-Londonderry, said she offered Senate Bill 410 after observing what was happening at school board meetings this summer and fall, largely because of concerns of parents related to COVID-19 decisions and restrictions and impacts to education. She said if public comment periods are offered, it is often at the end of the meeting which ends late when parents should be at home with their kids.

What has fueled a lot of the dissent at the meetings, she said, is that parents feel they are not being heard and that has led to arguments, in part because they do not get a chance to speak.

“We just have to do this better and I thought this was a good place to start,” Carson said of her bill.

Barrett M. Christina, executive director of the New Hampshire School Boards Association, opposed the bill on behalf of the association while stressing that they do not oppose public comment. Most boards already do this, he said.

“We feel there should be some policy that carves out time place and scope of the public comment period,” he said.

Some boards do not have a policy and think this is a local issue.

He said the organization sent out a survey to school administrative unit offices and heard back from about half.

“School boards are already doing this across the state,” Barrett stated, noting that some are limiting public testimony to three minutes per speaker.

He said there could be some problems if the bill is made law including emergency meetings, called, say if there is a roof that caves in from an ice storm.

“We have to hold a 30 minute public comment period before that? It doesn’t make sense,” he said.

The state Board of Education has not taken public comment in at least about a year, he noted.

“They’ve been shut down,” he said. “It’s not just local school boards.”

Steve Young of Londonderry spoke in support of the bill.

Young said he served for 18 years on the Londonderry School District and it never offered a public comment period during his tenure but allowed for comments along with announcements at the end of meetings.

As chair, he said he would always call for the public comment before an important vote, “but not everybody feels that way.”

He supported the idea of creating a public comment requirement with a time limit allowed.

He said offering the public a comment allows for less friction and more consensus.

Recessing meetings for people to stop talking or walking out of the room and adjourning because of public comment is unacceptable.

Young said presentations and announcements at the beginning of a meeting could also add a public comment, with or without a time constraint, because meetings should not be held up by some artificial 30-minute time frame but there could be limits to how long people can speak.

“I think it could be nice to have more open communication,” he said

Sen. Jay Kahn, D-Keene, said it sounds like there is a principle here that public comment ought to be allowed. Timing, order, seem secondary to the principle.

Bob Slater of Londonderry, a current school board member but speaking on behalf of himself, supported the bill.

He said it has been a rough year on the board and there has been a lot of inconsistency in public comment access.

“Up until about 60 days ago, we did not have a public comment period,” he said. He proposed it be on the agenda and it was adopted.

He said it stops the confusion and questions and is offered after announcements as a separate segment at the end of each meeting.

Slater supported the bill noting 30 minutes has worked out for them with limits of three minutes per speaker.

“We’ve gotten close to 30 minutes in the past. But it is so important to hear from the parents,” he stressed.

The consistency would help “try to keep some peace in the community.”

Diana Fenton, attorney for the office of governance for the state Department of Education, was asked by the chair to talk about the code of ethics provisions within the bill.

She said the state Board of Education does not have direct oversight over school board members across the state.

“They are elected officials and are governed by the ballot box,” Fenton said.

She noted that the department created documents of a code of ethics directed at teachers not elected officials.

“We have nothing to impose if anything would be violated,” she said.

But with teachers, a credential is attached to the code.

The committee meets Wednesday and plans to vote out of committee a number of bills including this one.

On Tuesday the Senate Education Committee did vote to recommend to the Senate that SB 394 pass, relative to changing the age of majority to 21 for those with disabilities and SB 384, a technical change to the definition of tuitions as requested by the Department of Education.