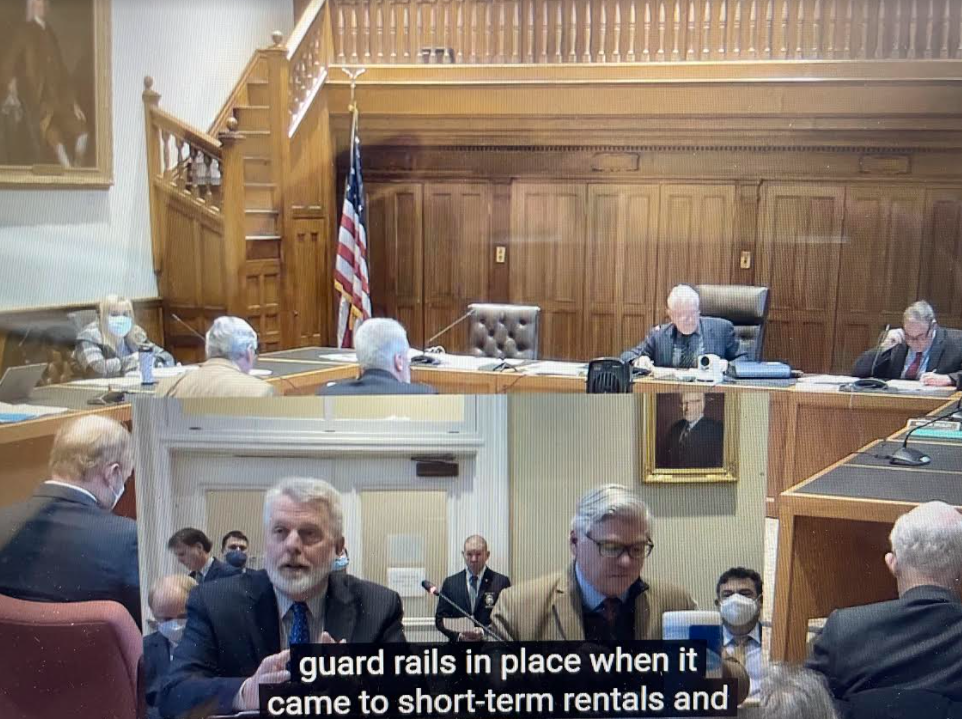 CONCORD – Municipalities could be prohibited from adopting ordinances that ban short-term rentals under a bipartisan bill proposed in Concord Tuesday.

The first proposed statewide measure to address short-term rentals comes after Conway voted no to allowing them everywhere in the community and the matter is now in court.

A judge hearing the case in Carroll County has stated she wished the state had some sort of law dealing with short-term rentals.

Under the measure, towns and cities would be able to regulate parking, noise, health, and safety of the unit but could not ban short-term rentals outright, French said.

It would also allow communities to charge a fee for inspections and rescind permits.

He said the bill was an attempt to “balance the rights of private property owners with the needs of the towns to regulate” for health and safety.
“It is a start of a conversation we need to have,” he said.

Some communities have created their own short-term rental programs and have permits that pay for regulating it.

Property owners and public officials testified on both sides of the bill while Bed and Breakfast operators expressed concern that the state is not treating their business fairly and that short-term rental units do not have the same rules and regulations.

Most agreed the state needs to do something but were not in solidarity over what the details should be in permits and whether that was overregulating private property.

Margaret Burns of the New Hampshire Municipal Association opposed the bill. She said separation of residential and commercial uses is central to zoning. The bill would carve out an exception for short-term rentals, she said.

She was asked by state Sen. Jeb Bradley, R-Wolfeboro, about pre-existing use and whether she was concerned that the lack of enforcement creates a situation across the state which will lead to litigation that will be ongoing for years, and will lead to federal litigation.

She was further asked about the revenue loss if towns ban such rentals, noting 30 percent of that is going back to towns.

Burns noted, however, that Bed and Breakfasts and hotels have been operating and paying their taxes into that as well.

He said historically, owners have been renting their properties before platforms like Airbnb and VRBO and while those platforms have allowed for more rentals and more issues with noise and garbage, bans do not work.

“An outright ban in a community is not going to solve the problem,” Norwood stressed.

Laconia Mayor and former state Senator Andrew Hosmer, and Scott Myers, city manager of Laconia opposed the bill as drafted. They said it does not go far enough, although they welcomed additions in the amendment.

Laconia has a short-term rental program that is working well, they said, and could be a state example.

The city has close to 200 properties registered under its program. The city charges $250 for two years and that pays for the inspections and city costs.

Those who own and live in their properties 150 days a year can register there and also have the opportunity if they show they have been renting over the past five years.

The city does a basic life safety inspection and requires all parking on-site and decides through building ordinance how many can occupy for overnight sleeping.

The bill, they said, does not go far enough for simple-sense protections for the visitors and the residents.

Hosmer said the city didn’t want to regulate but needed leverage and guardrails in place to protect the neighborhood when someone comes in and purchases a property to be listed as a short-term rental allowing for say, 22 people to stay in a three-bedroom lakeside home.

The original bill did not allow for an inspection and a phone as a way to immediately contact the landowner rather than just an address for legal service, something to which Myers and Hosmer objected.
Both said they would be happy to work on improved language.

Bob Quinn, chief executive officer for the New Hampshire Association of Realtors, added that short-term rentals have a positive impact on state coffers through the rooms and meals tax.

Airbnb has indicated it paid $9.3 million to the state from such short-term rentals and represents about 40 percent of the market.

Conway selectman Carl Thibodeau, speaking as a private individual, testified after reading a letter from the town’s fire chief about conflicts and costs associated with short-term rentals.

He said he was not there to support or oppose the bill but ensure that any municipality will have their costs recovered when they come to regulate these rentals.

Thibodeau suggested that regulations include more details including those related to the fire pit and wood-burning appliances in a unit, secondary fire escape egress, and others.

“These things need to be addressed,” as part of the rental permits, statewide, he said.

Sen. William Gannon, R-Sandown, said he is looking to rent his property in the fall to pick up some rent money to pay his taxes. He said he was very concerned there would be a potential to overregulate and impinge upon a property owner’s rights in certain towns.

David Cavanaugh, spokesman for the Mount Washington Valley Association for Private Rentals, spoke in favor of the bill. He said the use has stayed the same, it is just the marketing platform that has made it easier for property owners to rent.

“This seems to be a happy medium,” Cavanaugh said of the bill. “The bill, I feel, could create a controlled and monitored rental environment.”

The committee didn’t vote on the bill, but will vote on it in the future with no date specified.

Chris Vachon, of North Conway, said he is very familiar with vacation communities and said short-term rentals are how he has traveled.

Vachon said he wanted to have the option to rent if he needed to, and without being able to rent short term, “is a tough pill to swallow.”

He noted that only about 20 percent of the electorate in Conway voted on whether to allow them and that many didn’t even know what they were voting for. The matter is now in litigation.
A copy of the bill as introduced is here http://www.gencourt.state.nh.us/bill_status/billinfo.aspx?id=2064&inflect=2