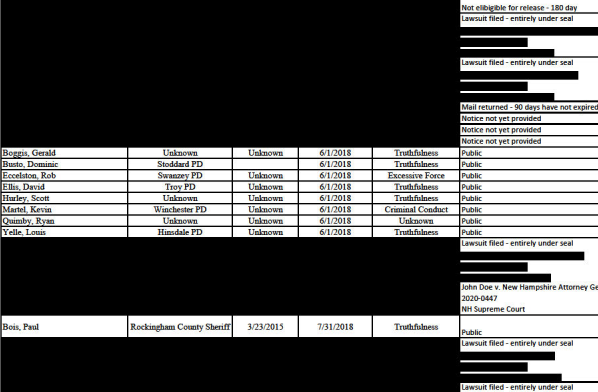 Screenshot of the Laurie List as it appears in the first compliance report filed by Attorney General John Formella.

It’s been more than three years since ACLU-NH recruited six New Hampshire news outlets to jointly file a lawsuit to make public the redacted names on the Laurie List of dishonest police officers.

ACLU-NH and five of the news outlets have withdrawn from the lawsuit, but it continues in Hillsborough Superior Court South with the New Hampshire Center for Public Interest Journalism as the sole remaining plaintiff.

All of the motions have now been filed. It is now up to Judge Charles Temple whether the Laurie List, also known as the Exculpatory Evidence Schedule or EES, will become public in its entirety.

“The case is now with the judge,” said Andru Volinsky representing the New Hampshire Center for Public Interest Journalism. “All motions are filed. The state relies heavily on the new statute to argue for dismissal, but their own conduct shows the statute is not the exclusive method to list or remove officers from the list, and the use of the statutory procedures is completely discretionary.  We’re hopeful that the judge will schedule a formal hearing.”

Solicitor General Anthony Galdieri, representing the attorney general, said: “Because the NH Center for Public Interest Journalism v. DOJ matter remains open and pending in court, our office has no comment on it at this time and relies on the pleadings it has filed in this matter.”

Temple originally ruled the list is a public document, but the Attorney General’s Office appealed to the state Supreme Court, which agreed it is public, but sent it back to Temple to determine if the officers on the list have privacy rights, which is where it stands now.

That case remains in court although ACLU-NH, The Telegraph of Nashua, Newspapers of New England, Inc., Seacoast Newspapers, Inc., Keene Publishing Corporation, and the Union Leader Corp. have withdrawn saying they agree with the attorney general that the new law, RSA 105:13-d, makes the lawsuit unnecessary.

“At best there has been quite a bit of confusion in their attempt to comply with the law,” said veteran defense attorney Jim Moir of Concord.

The attorney general recently released the unredacted names of 90 officers and former officers of the 265 names on the latest list, then re-redacted 15 of those names later in the day, unaware at first they had filed in Superior Court to have their names removed from the list.

The compliance report shows 38 officers have filed for removal in Superior Court and more have additional time to do so.

Officers who argue in Superior Court have the right to confidentiality under the new law until a judge makes a determination whether to remove their name before it becomes public.

The attorney general was two weeks late in filing its first compliance report required under the new law and admitted in the report it still hasn’t decided how to handle cases involving deceased officers, officers deployed overseas or for whom they have no valid address. And said the attorney general is still seeking clarification from Superior Court of its sealing of the officers’ lawsuits.

Another veteran attorney Robin Melone of Manchester is concerned that names are being removed from the list without criminal defendants having the opportunity to find out.

Criminal defendants are constitutionally guaranteed all exculpatory evidence, which is evidence that would be favorable to them. That could include a police officer’s discipline for dishonesty, use of excessive force or mental instability that required their name to be placed on the list.

The list is critical to criminal defendants who were convicted but were not aware that an officer testifying against them had undisclosed exculpatory evidence in their personnel file.

If criminal defendants find out after their conviction that such evidence existed and wasn’t disclosed, they can seek a new trial or ask that the charges be dropped altogether.

Manchester attorney Robin Melone said the defense bar is still trying to determine how best to make sure criminal defendants know if there was undisclosed exculpatory evidence in their case.

“We are having conversations about how best to look back.  I think each attorney is doing their own review.  I’m still concerned about old cases where clients don’t know,” Melone said.

There needs to be notification to those defendants, she said.

Formella noted in his motion to dismiss that when the lawsuit was filed there was no law governing the list.

The new law authorizes his office to maintain an EES and specifies when and under what circumstances the names will become public under the state’s right-to-know law.

“RSA 105:13-d essentially balances the public’s right of access to governmental records, N.H. Const. Pt. I, Art. 8, with the reputational and privacy rights of present and former law enforcement officers to create a workable legal regime under which all of those important rights are adequately protected and vindicated. As a result, RSA 105:13-d moots this case,” Formella argued.

In objecting to the motion to dismiss, Volinsky said the court should rule that releasing the list in its entirety would not constitute an invasion of privacy.

Volinsky said although the parties appear to agree that the current and future versions of the EES are public documents subject to the right-to-know law, that is misleading because the attorney general relies on the legislature’s finding that the EES is a public document.

But the legislature conditioned its finding that the EES is public on the terms and conditions for release stated in the new law.

“That is, the legislature has concluded that if the provisions of the statute are followed, the EES is a public document. Presumably, it also follows that if the provisions of R.S.A. 105:13-d are not followed, as for example, if the statute is repealed or the DOJ exercises its discretion not to host an EES pursuant to R.S.A. 105:13-d, then some party may argue the legislature will not have taken a position and the parties must re-litigate an answer to the Supreme Court’s remand question,” Volinsky wrote.

Volinsky also made clear that the lawsuit was filed to obtain the list dated June 18, 2018, which has changed since then with names added and removed.

If any names were deleted because it was determined that the officer’s placement on the list was unfounded, the attorney general would be required to make an appropriate showing as to who concluded it was unfounded and why that conclusion was reached, Volinsky wrote.