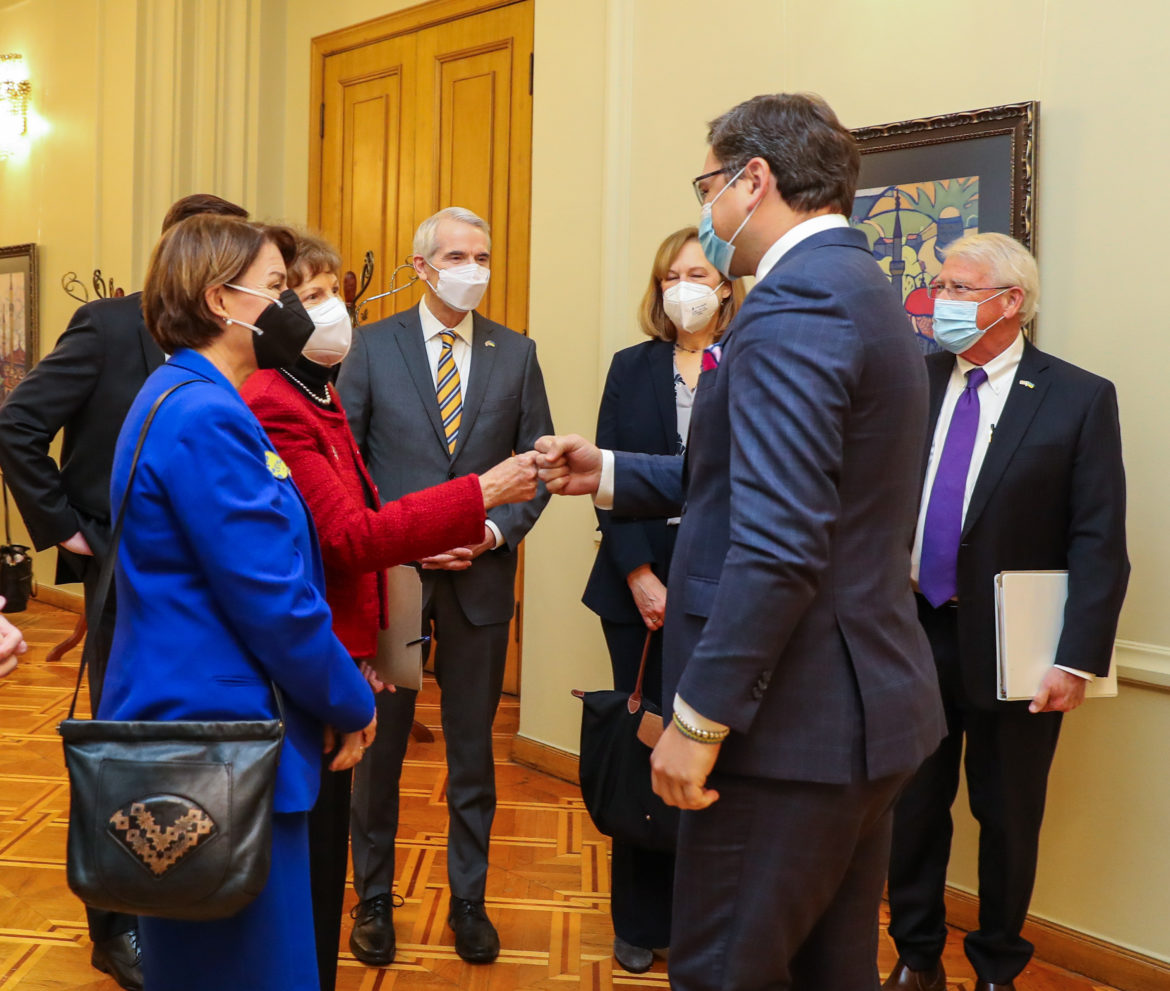 U.S. Sen. Jeanne Shaheen is pictured fist bumping Foreign Minister Dmytro Kelebra while on a trip to the Ukraine.

WASHINGTON – As the threat of a Russian invasion of Ukraine looms, U.S. Jeanne Shaheen, D-NH, held a national press briefing Thursday to go over her trip there this week and discussed President Joe Biden’s comments Wednesday on defending Ukraine sovereignty.

Shaheen left Sunday and arrived Monday in Kyiv, where she had an embassy briefing, met with ministers of foreign affairs, energy, and defense among others, and then with President Volodymyr Zelenskyy.

She said the message left was that the United States stands with Ukraine and there is bipartisan United States support for them as over 100,000 Russian troops on the eastern border and another 100,000 on the northern border stand ready to invade the country.

Now back in Washington, Shaheen said, “I think it was a very positive trip and we are looking now at ways in which we can be helpful, at home in addressing some of the asks that we heard.”

“We talked about the potential for additional sanctions,” to Russia, “weapons helpful to Ukraine, about the effort by our allies…to send weapons to Ukraine and the importance of a united transatlantic front against Vladimir Putin that…he will be held accountable.”

“So let me again reiterate the importance of working with our allies and the importance of making sure Vladimir Putin got a clear message from the senators who were there that Congress is united and watching closely what he decides to do in having a bipartisan response to whatever action he takes,” Shaheen said.

She said, “hopefully, diplomacy will be allowed to work. That’s the best outcome here and the clearer we are about our message and that he understands the threat, the better.”

A reporter from Politico asked Shaheen about comments from President Biden during his one-year anniversary address Wednesday on the differences between an “invasion” and “minor incursion” into Ukraine.

Biden’s office later clarified the remarks but the national press noted it left open to interpretation in Russia what the differences are that exist not only in the United States and its response but within NATO on what each country is willing to do depending on what happens at the border and the degree to which they would respond.

Shaheen said she had the opportunity as part of the delegation to brief President Biden Wednesday morning and said he was very interested in the trip and in taking strong action against Russia if there is an invasion.

“I think he misspoke at his press conference,” Shaheen said about “minor incursion” and she said she does believe Russia needs to see a bipartisan response from Congress.

Shaheen is chair of the Senate Foreign Relations Subcommittee on Europe and Regional Security Cooperation.

She joined Senate Foreign Relations Committee Chairman Robert Menendez, D-N.J., in leading a group of Democratic lawmakers to the act which would impose steep costs to Russia in the event of a renewed Kremlin invasion of Ukraine. She said it would impose crippling sanctions on the Russian banking sector and senior military and government officials if President Putin escalates hostile action in or against Ukraine.

It also would help Ukraine.

The act calls upon the Departments of Defense and State to expedite the transfer of defense articles to bolster Ukraine’s defense capabilities and authorizes $500 million in supplemental emergency security assistance to Ukraine in the event of a re-invasion by Russia. Lastly, the bill also expands U.S. efforts to counter Kremlin disinformation and strengthen ties with key regional partners facing Kremlin aggression.