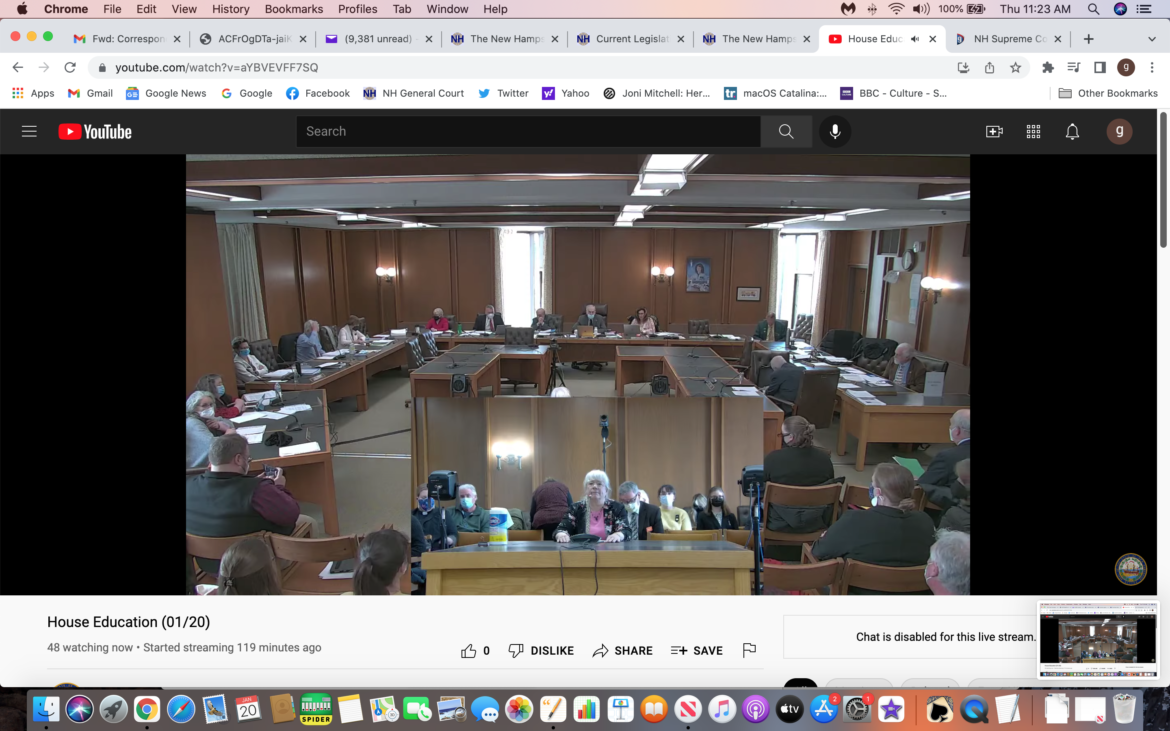 House Bill 1255 was heard before the House Education Committee on Thursday.

CONCORD — A bill to update a Cold War teacher loyalty law drew a crowd in opposition Thursday calling it censorship and an attempt to whitewash the nation’s history.

But bill sponsors said it is intended to ensure teachers are educating students not indoctrinating them, offering anecdotal evidence that they said is happening in schools today.

Only one person beyond bill sponsors spoke in favor of the bill or the amendment they are working on, while the remainder of people testifying opposed the bill saying it will ultimately hurt students who will not learn the good and the bad history of this country.

A tally of people signing in to the public hearing on House Bill 1255 before the House Education Committee, was 2,232 opposed, 26 in favor and 1 neutral.
The bill as written would prohibit a teacher from “advocating any doctrine or theory promoting a negative account or representation of the founding and history of the United States of America in New Hampshire public schools which does not include the worldwide context of now outdated and discouraged practices. Such prohibition includes but is not limited to teaching that the United States was founded on racism.”

The bill would also add socialism and Marxism to a list that teachers would be prohibited from advocating.

Opponents of the bill said it would double down on the provision passed last year in the budget that has already “chilled the teaching of some subjects.”

Devon Chaffee, executive director of the ACLU New Hampshire, said the best way to discourage free and open discussions is to have vague limitations coupled with serious and career ending consequences for teachers.

“That is what this bill does,” Chaffee said. “This is fundamentally about censorship.”

History teacher Jennifer Given said she took a personal day to represent herself, and her kids, both biological and those in her classroom.

Given told the committee she teaches the slavery of Rome, China and Egypt, and compares types of forced labor around the world.

She took issue with the anecdotes supporters used and their vague assertions.

“In trying to solve a problem,” Given said, “you are reaching so far into my classroom to say what I can and cannot say.”

The prime sponsor of the bill, Rep. Alicia Lekas, R-Hudson, said her intent is to ensure teachers are educating students not indoctrinating them.

She has had conversations with high school students who believe slavery only occurred in the United States, she said, a war was fought over it and that it is over.

“That is clearly not the case,” she said, noting it is important for students to understand slavery happened all over the world and it is still going on.

“My intent is to expand the worldwide content, that is my goal to get it out there,” Lekas said, “so it is not limited to the U.S. did this, it happened and it’s over. I want to ensure it does not happen again.”

Lekas said the fact that there was a civil war over slavery indicates there were people opposed as well as those favoring it not that the founders were racists.

She asked for help to produce an amendment that better explains what she wants to accomplish.

A bill co-sponsor, Rep. Erica Layon, R-Derry, said the intent of the bill is to make sure teachers teach kids “how to think, not what to think.”

“I have heard of teachers saying all our founders were racist,” she said. “These things do happen in our schools.”

Students should not have to parrot what a teacher believes, she said, to receive a good grade.

But Oyster River School District officials told the committee it is reaching too far and any anecdotal incidents should be handled at the local level.

Superintendent James Morse said the bill is vague and unnecessary.

“I would suggest legislation that would fit the majority, not anecdotes,” Morse said. “Those should be addressed at the local level.”

Board chair Tom Newkirk said many districts have a policy that prohibits teachers from using their position to advocate their personal political beliefs.

“The greater danger is teachers are reluctant to teach subjects of American history that have been suppressed and desperately need to be taught,” Newkirk said. “With their teacher credentials at stake, who can blame them for not touching certain subjects.”

The presidents of the two largest teachers’ unions in the state, The National Education Association-NH and American Federation of Teacher-NH, both opposed the bill saying the law passed last year has already chilled open and honest discussions.

Deborah Howes, president of AFT-NH said the bill is so vague it would be impossible for teachers to know what is permissible in the classroom.

She said the bill would limit teachers’ ability to teach and would take away tools students need to learn.

“It is subjective. These laws do not help kids learn,” Howes said. “Indoctrination is in the eye of the beholder.”
Dover teacher Eric Schlapak and the 2021 recipient of the Christa McAuliffe Sabbatical, noted her picture hanging on the wall of the committee room.

“We know her story,” he said, noting she wanted her students to understand specific perspectives, humanizing her lessons, something the bill would stifle.

“I wonder if she would be able to tell her story with this bill without having her credentials threatened,” Schlapak asked.

Jonah Wheeler of Peterborough said he was the only black student in all white schools.

But his third grade teacher pulled him aside to talk openly about what Martin Luther King Jr. stood for, his teachings and the reality of what he was doing at the time.

“Without that meeting, I may not be here today and probably would have already taken my life. It is that real for (people of color.)”

He noted in his work, teachers are coming to him and saying they are already feeling the chilling effects of the new law.

“If they don’t have the same conversation with kids today, what if kids feel as isolated as I did,” Wheeler said. “That’s a real fear. I hope we try our best not to chill this speech.”
The bill was also opposed by the NH Council of Churches.

The Rev. Heidi Heath, the organization’s executive director, called the bill harmful and dangerous saying the nation and state need to face systemic racism if the country is to reach its goal of a more perfect union.

“As religious leaders, we believe in the power of truth telling,” Heath said. “We want to empower our teachers to tell the truth, nothing more, and nothing less.”

The committee did not make an immediate recommendation on the bill and will wait for Lekas to come back with her amendment.