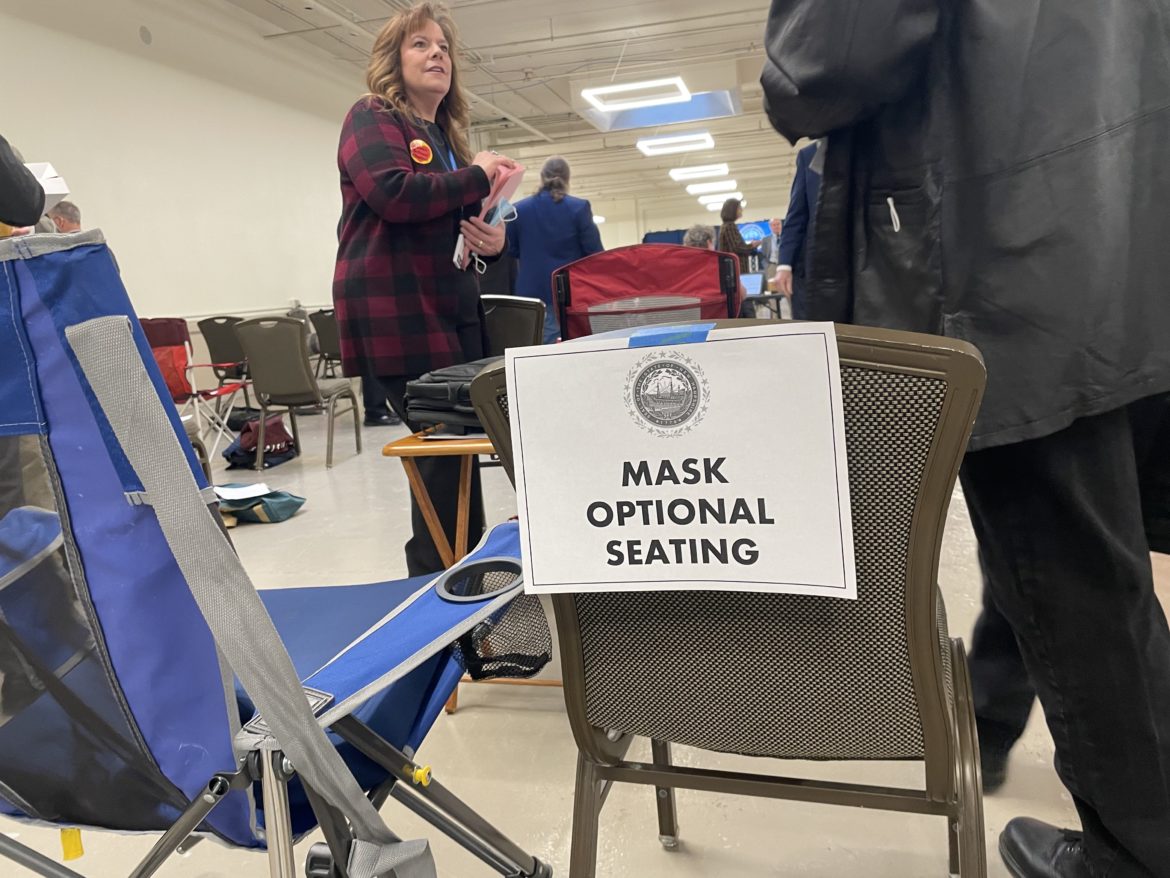 This is the mask-optional section of the House session last Wednesday at the DoubleTree by Hilton in Manchester.

Two more House members have tested positive for COVID-19 and believe they were infected at sessions at the DoubleTree by Hilton in Manchester last week, bringing the known total to at least five.

Rep. Bill Marsh, D-Brookfield, a physician, said he knows of at least one other House member with COVID, and was told a state senator has also become ill with COVID after the separate Senate session last week.

“I think we have a super-spreader event,” said Marsh of the House sessions last Wednesday and Thursday. Marsh switched to the Democratic party last fall over differences with Republicans on handling the pandemic.

Marsh has called on Lori Shibinette, the commissioner of Health and Human Services to investigate what’s going on in the legislature relative to the spread of COVID. On Thursday night, he said that enough cases have been identified that the state is investigating.

And on Thursday, Rep. Suzanne Vail and Rep. Frances Nutter-Upham, both of Nashua, said they, too, tested positive for COVID-19, all with at-home antigen tests.

Like Grassie, Vail and Nutter-Upham are both convinced they were infected at the House session. The House was divided in the room those two days by mask-optional and mask required seating with Republicans mostly taking up the mask-optional seating.

Marsh and Rep. Jeffrey Salloway, D-Lee, an epidemiologist, warned before the House met of the possibility of a super-spreader event.

Salloway said Thursday there are likely many more cases now in the House.

“If you have reported five cases, how many are there likely to be out there. We’re looking at a factor of three minimum, minimum of 15 cases in the House,” Salloway said.

Marsh said the House should release information about how many members have tested positive and whether they were at sessions or committee meetings to protect the public as well.

Nutter-Upham said she notified the Speaker of Thursday’s positive test and let him know she attended the House Health and Human Services Committee meeting on Tuesday before she began feeling sick.

Nutter-Upham, a psychotherapist and art therapist, said she did everything she could to protect herself and was still infected.

She wondered how many Republicans who weren’t wearing a mask have contracted the virus, but either refused to be tested or didn’t tell the leadership if they tested positive.

On Wednesday night Nutter-Upham started feeling badly with a sore throat, mucous, chills and runny nose. “I thought it was a cold,” she said.

But a nurse practitioner friend told her to test for COVID to be safe and it turned out positive. “I have mild symptoms,” she said.

Rep. Vail confirmed Thursday that she tested positive for COVID-19. Vail said she has notified her aunt, who she visited over the weekend, but otherwise has had no contact with anyone.

It came on with a cough she couldn’t suppress and a slight fever, she said.

Vail said at the session there was a woman not wearing a mask who used the Democratic women’s rest room where she was helping a colleague. Vail said she did let the Speaker know and said the House needs a robust testing program to continue with the committee meetings.

She would like to see the House issue a press release when positive tests are reported to him so the public knows how many cases are at the State House to decide if they want to testify in person.

House members must attend in-person to vote. Members of the public can watch remotely, but they must be in-person at the hearings to testify.

State Sen. Thomas Sherman, D-Rye, also a physician, said the take-home message is, “that Republican legislative leaders are putting the lives and health of participants at risk.

“We need to have an honest discussion about how to move forward to get the work of the people of New Hampshire done but with the highest priority being the safety of the legislators the staff and most importantly the public. We know how to do this and we did it successfully last session,” Sherman said.