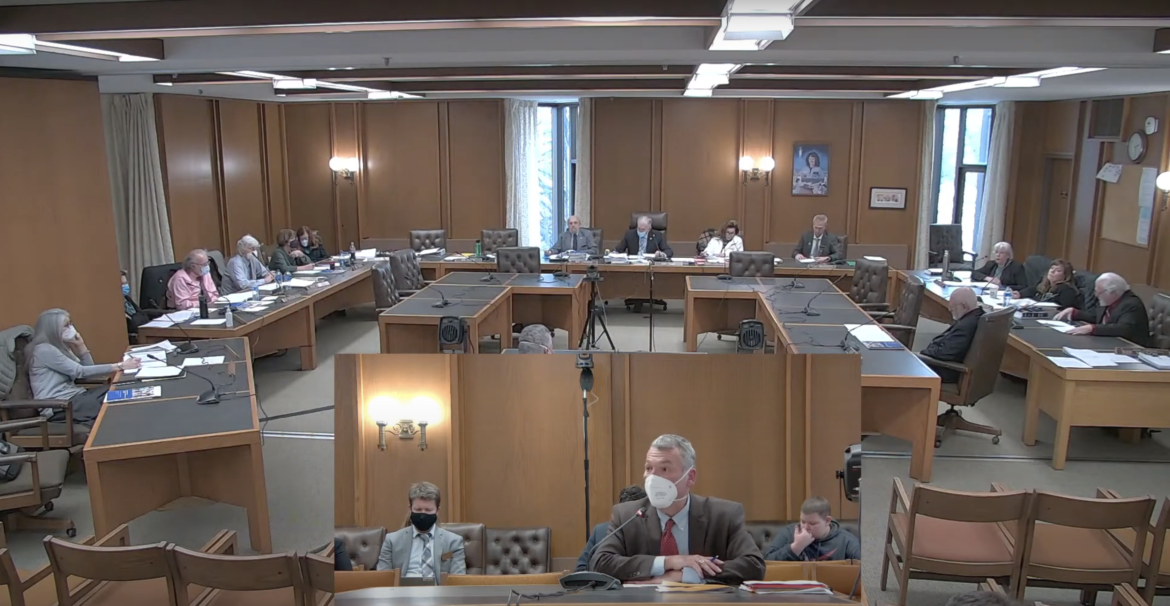 Representative Dave Luneau testifies in support of HB 1684, which would require the Education Freedom Account to live within its budget.

CONCORD — The Education Freedom Account program would be forced to live within its budget this fiscal year and next under a bill heard Wednesday.

For the current fiscal year, the program was budgeted for less than 30 students, but many more parents participated than planned and the program will cost more than $8 million.

House Bill 1684 would limit the amount taken from the Education Trust Fund for the grants to the money the Department of Education budgeted, $129,000 for this fiscal year and $3.3 million for fiscal year 2023.

“This bill would give lawmakers an opportunity to question the executive branch on how they are spending taxpayer money and to ensure it is spent wisely and not on a runaway train,” said the bill’s prime sponsor, Rep. David Luneau, D-Hopkinton. “The (education freedom account program) has the potential to be a train wreck and this first year it has the potential to be a runaway train.”

Luneau said Education Commissioner Frank Edelblut’s estimates of the students leaving public schools for the program were not accurate, which has caused the state’s costs to rise significantly and could ultimately be a $75 million annual exposure for the state in figures from the Legislative Budget Assistant.

However, a number of parents and students participating in the program begged the House Education Committee not to pass the bill, saying the program has allowed them to have the most appropriate educational situation for those students.

Several said they could not afford to repay the money if the bill passed, and one Nashua parent said the real train wreck is the public school system and its one size fits all philosophy.

The law establishing the program was included in the state’s biennial budget package passed last year and allows the department to draw whatever is needed to pay for the grants from the Education Trust Fund.

Under the law, if the grants exceed the amount of money in the trust fund, then the state general fund would have to pay the grants.

The deficit would be reported to the Joint Legislative Fiscal Committee, the governor, and Executive Council, but could not delay paying the grants to parents.

The Education Trust Fund pays adequacy grants to school districts and per-pupil grants to charter schools as well as other education costs.

Luneau noted the trust fund is based on estimates for what is needed to cover costs and if not enough money is in the fund after parental grants are paid, other areas would be squeezed and used the special education or catastrophic aid program as an example of one prorated in the past when the fund ran low of money.

He said the problem with the program stems from the commissioner estimating that 75 percent of students participating in the program would come from public schools, 15 percent form private schools and 10 from homeschooling.

Instead, Luneau said, 83 percent were from private and homeschooling programs and only 13 percent from public schools.

He said that greatly increases the state’s obligation because it was not paying for the private school and home school students, but is now.

He said if most of the students had come from public schools, the state obligation would not change, but it does when with private and homeschool students.

Luneau said the department’s estimates and assumptions never had a thorough analysis as it was included in the budget that was approved by the Senate.

But Matt Southerton, director of policy and compliance for the Children’s Scholarship Fund New Hampshire, which administers the program, said his latest figures indicate slightly less than half of the 1,856 students participating in the program are from public schools, but he was not sure of the context compared to Luneau’s figures.

Southerton noted the bill is retroactive and would “defund” about 1,800 students currently in the program, many from low-income families with no way to repay the grants.

If the budget were $3.3 million in fiscal 2023, he said someone would have to tell about 1,000 students they could no longer participate.

He also said the state has an obligation to provide a public education to every eligible student, so its exposure already exists without the freedom accounts.

“It’s very, very early in the program, and what this really is revenue sharing,” Southerton said. “We didn’t know the participation would be so great, but we are thankful it was.”

Committee member Rep. Glenn Cordelli, R-Tuftonboro, who supported the original bill establishing the accounts, asked Luneau what would happen if the program went to the original budget.

Luneau said if the money had already been paid, it is not likely anyone would want to “claw back” the funds, but a provision could be included to begin the cap next fiscal year.

But committee member Rep. Michael Moffett, R-Loudon, asked what happens to the current students and the prospective students looking at the program next year?

Luneau said he is trying to stop a train wreck, but noted the parents of children who were in private schools and homeschooling, were paying for their children’s education before.

“These are not kids who were pulled out of public schools.,” Luneau said, “these kids were in a non-public school situation prior to this offering.”

Shalimar Encarnacion, program and outreach coordinator for the Children’s Scholarship Fund, said the program is filling a great need.

“In every school, especially in the public school system, kids are falling through the cracks,” she said, “and we are catching them and helping them.”

She said the problems have grown since the pandemic began.

Brian Hawkins, representing the NEA-NH, was the only person testifying in favor of the bill.

Taking a look at budgeting the program going forward, is something his organization supports, he said.