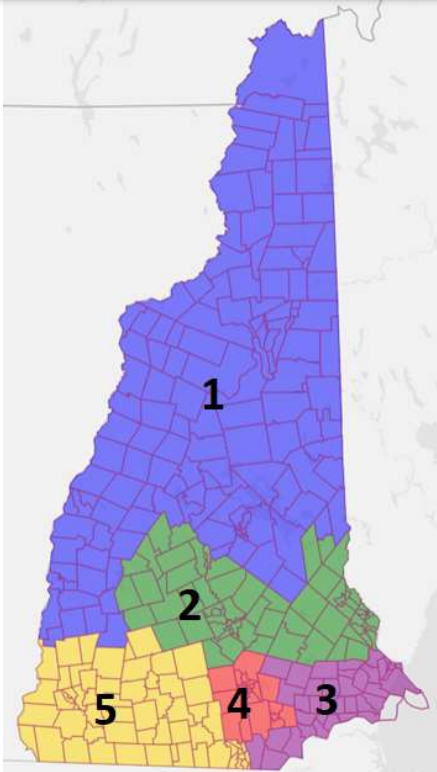 CONCORD — People told Senators Monday to go back to the drawing board and construct fair and transparent redistricting maps not driven by party politics.

The Senate Election Law and Municipal Affairs Committee held a public hearing on four proposals to redraw the political boundaries of the state Senate and Executive Council districts, two from Republicans and two from Democrats.

Most of the people testifying asked the senators to reject the Republican plans to redraw the state Senate districts and Executive Council district, saying they made the current gerrymandered districts worse.

No one testified in favor of either Republican plan.

Others told the committee, the people of the state are watching at a time when lawmakers need to instill trust and confidence in the political process and gerrymandered districts undermine that.

“If you support clearly gerrymandered maps,” said Ellen Farnum of Tamworth, “you run the risk of losing credibility with voters.”

Others referred to a resolution many towns passed last spring calling for a fair and transparent process to redraw the political districts, and others noted despite public hearings in all 10 counties, the maps did little to address the suggestions and recommendations citizens made.

Olivia Zink of Franklin, and the executive director for Open Democracy Action, opposed all the amendments proposed by both parties.

“I do not wish to see a Republican plan and a Democratic plan,” Zink said, “I want to see one plan that is good for the voters of New Hampshire.”

Many people took aim at the proposal to retain the five council districts as they are including District 2, which stretches from the western to eastern border of the state and packs many Democratic strongholds like Keene, Concord, Dover, Durham and Somersworth. A revised plan is likely to be presented by Republicans.

The second district is often cited as an example of gerrymandering and several testifying noted Gov. Chris Sununu  singled it out as an example for what would be unacceptable to him.

Liz Tentarelli, president of the League of Women Voters NH, said her organization has been pushing for a fair, transparent and open process without gerrymandering and brought up the executive council plan.

“This map is just as obviously gerrymandered now as was when it was proposed and adopted in 2011,” she told the committee.

She said the redistricting process needs to be completed by June for the new districts to be in place for the 2022 election, and if they approve a map with the current district 2, the governor could veto it, delaying the filing period, or it could be challenged in court also delaying the process.

“These are all open questions,” she told the committee.

A number of people testifying preferred the districts drawn by the Mapathon project which used communities of interest such as shared high schools, emergency services and water and sewer systems in developing senate districts.

The group also tried to create as many competitive districts as possible, which a number of people said produce better candidates and fewer on the extremes of either party.

And said David Andrews, the lead mapper for the organization, the districts should be compact and not stretch from Bedford to Hinsdale as the Republicans’ proposed district 9 does.

“I am very disappointed with the fact you have a Democratic proposal and a Republican proposal,” Andrews said, “when you should be working together on something you can be proud of and the voters can be proud of.”
He said redistricting is a foundation of democracy, and should reflect the makeup of registered voters of the state, while gerrymandering does not allow the best candidates to rise to the top.

“With gerrymandering, the primary is the real election,” Andrews said, “and there is no bipartisanship in the State House and that is not good for New Hampshire voters nor anyone.”

The Republicans senate plan would provide 15 or 16 safe seats for their party and eight seats that would be filled by Democrats, while the Democratic plan would result in a 13-11 split leaning Republican with more competitive districts.

While many people were not happy with either plan, most said they could support the Democratic proposal for the Senate, but not the Republican one, although they noted both favor incumbents.

Many wanted the senators to approve bipartisan plans.

“I have an eight-year-old daughter,” said Michael Strand of Bedford, “and I believe democracy is imperiled right now.”
He questioned why some of the proposed changes by Republicans were made and noted many of the changes would create less competitive districts.

Strand noted Republicans have said one of their prerogatives  is to combine politically-minded towns. He called that a poor attempt to justify a gerrymandering process.

”I was raised a Republican, the party of free markets, fair competition and may the best person get job, and I still believe those value, but now I’m a Democrat,” Strand said. ”I ask when did Republicans get so scared of competition?”

The committee will continue to accept new proposals for redrawing state senate and executive council districts and is scheduled to meet again Wednesday and then Jan. 20 and may vote on the proposals on one of those days.

Lucas Meyer of Forward 603, asked the committee to hold an evening public hearing to allow young people and others who work during the day to testify on the plans.

Committee Chair Sen. James Gray, R-Rochester, said he would discuss that with the committee.