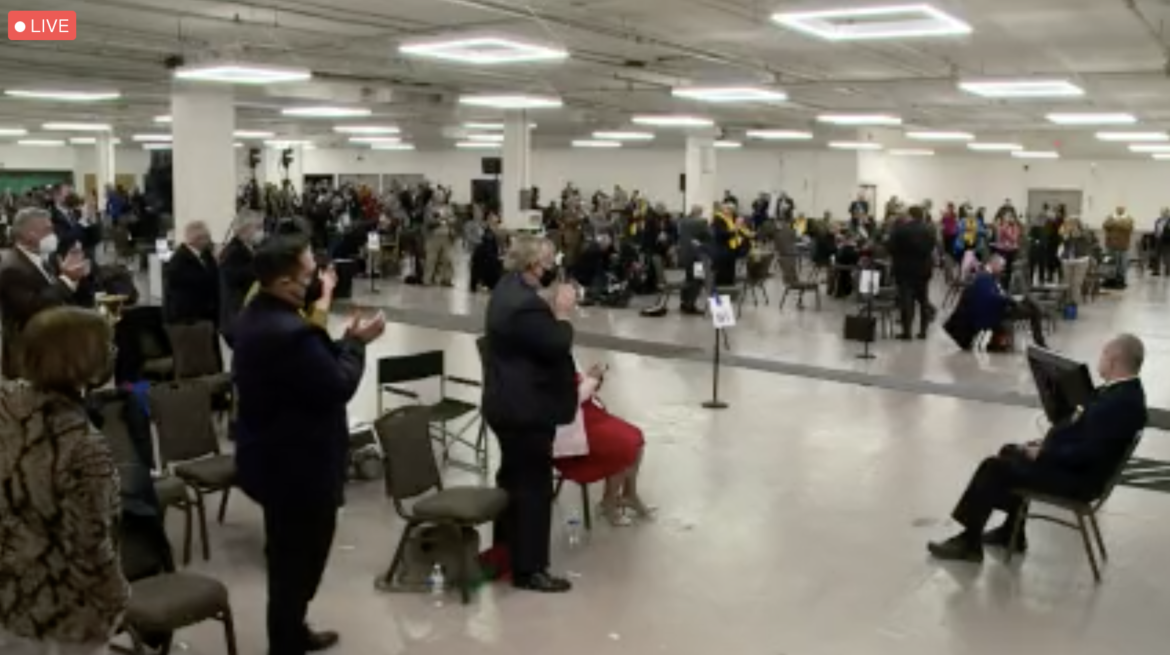 Members of the House of Representatives applaud at the end of their second session day on January 6, 2022.

MANCHESTER — Unanimously, the House approved a bill, 343-0, that some called flawed, but would rescue the state’s energy efficiency program eliminated by the Public Utilities Commission ruling last year.

House Bill 549 would limit the system benefits charge to what was collected last year and give the Legislature control over setting its rate.

But others who backed a more expansive three-year energy efficiency program rejected by the PUC said despite its flaws, it does retain the NH SAVES program run by the state’s utilities and is a pathway to address other aspects of regulators’ orders.

Rep. Rebecca McWilliams, D-Concord, said the three-year program proposed by the state’s utilities and agreed to by a number of organizations and groups, would have provided millions of dollars of savings in the first three years and $1.3 billion over 10 years.

“The cheapest kilowatt of electricity is the one you don’t use,” McWilliams said.

She said the bill would put New Hampshire, which is way behind other New England states on energy efficiency, even further behind.

Rep. Michael Vose, R-Epping, said the bill sets the system benefits charge at the highest level it has been in history and provides a mechanism to increase the charge in a stable and predictable amount, unlike the plan proposed by the utilities.

And he said the bill puts the legislature back in charge of the funding mechanism, since the benefits charge is essentially a tax.

Rep. Peter Somssich, D-Portsmouth, proposed an amendment that would have expanded the energy efficiency program and allow the charge to increase to make the program successful.

He said the program needs to be fixed and what he proposes is a small down payment on that.

But Rep. Michael Harrington, R-Strafford, said no matter how much is spent on energy efficiency, it never is enough, noting Massachusetts electric rates are slightly higher than New Hampshire’s and the Bay State spends much more on energy efficiency programs.

Rep. Kat McGhee, D-Hollis, said now is the time to increase investment in energy efficiency when its value is rising because of increasing fuel costs.

But she noted, something has to be done to fix what the PUC decision has destroyed.

“I ask you to pass this far from perfect bill so it can be used as a vehicle,” she said.

The PUC decision was released about a year after it was expected and rolled back the system benefits charge with the understanding it would continue to be reduced.

And the PUC ended the utility managed energy efficiency program and instead said it should be left to the free market to decide what is best.

The controversial decision was met with a lot of concerns from many sectors from politicians to businesses and other government agencies.

Several groups have filed requests for the PUC to rehear the case and others filed suit seeking to block its implementation. The only legal appeal of the ruling has to go to the state Supreme Court.