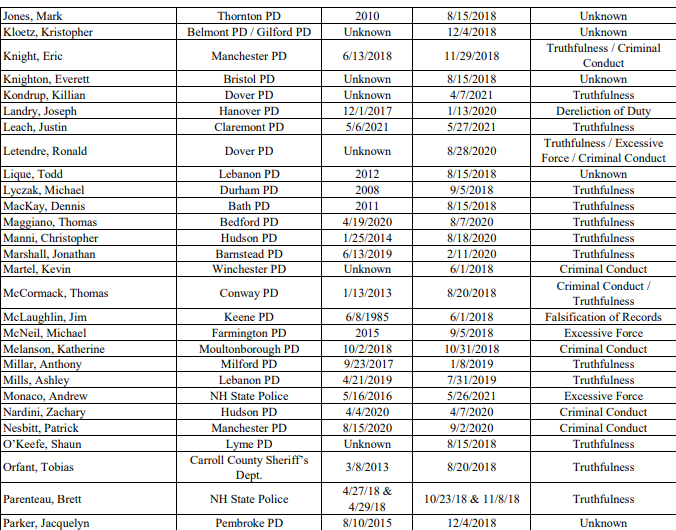 Defense attorneys are scouring the partial Laurie List that was made public Wednesday searching for police who may have testified against their clients but failed to disclose discipline for dishonesty in their confidential personnel files.

Convicted criminals are likely doing the same thing in hopes of getting their cases reopened.

And Rochester Police Commissioner David Winship Jr.’s lawyer said his client’s Laurie listed name wasn’t supposed to be made public, but was as a new law that aims to give officers due process to get off the list before their names become public moves forward.

Manchester attorney Robin Melone said it is time to end the flawed process that is now called the Exculpatory Evidence Schedule but is better known as the Laurie List.

It’s used to alert prosecutors when an officer with substantiated discipline for dishonesty, use of excessive force or mental instability must be disclosed to criminal defendants.
A conviction could be overturned if it is not disclosed even years later.

“The criminal defense community is already reviewing closed and open cases to identify any in which those named were witnesses and to ascertain whether Brady/Laurie information was disclosed as required,” Melone said.

Melone was referring to the U.S. Supreme Court Brady v. Maryland nationally and state v. Laurie in New Hampshire, which form the bedrock of criminal defendants’ constitutional right to all exculpatory evidence, that is evidence favorable to them.

And until Wednesday, all 281 names on the Laurie List were redacted with only the officer’s police department and brief statement as to what discipline placed them on the list and date it occurred.

“It is without question an incomplete list created by people in a seriously flawed, sometimes unfair and inconsistent process,” Melone said. “It is a failed experiment that needs to end, to be replaced with a public database free and easily accessible by all citizens.”

She said no prosecutor should feel confident in relying on the list to meet their disclosure obligations.

Rochester Police Commissioner David Winship Jr.’s name was on the partial list Wednesday morning when the first 90 names were released, but was removed later after the attorney general became aware that he had filed a lawsuit seeking removal from the list in Strafford Superior Court a week ago.

“We’re actively challenging his placement on the list,” Maher said.

The incident that landed Winship on the Laurie List in 2010 involved truthfulness when he was a police officer in Middleton, and his name was put on the list in 2018, Maher said.

Winship didn’t receive due process, Maher said, and he declined to detail the incident.

“His name was never supposed to be released,” Maher said.

Maher received an email Thursday from Solicitor General Anthony Galdieri Thursday that Winship’s name would be taken down, he said.

“He’s a respected member of the community,” who is actively challenging placement on the list and expects to finally get due process in arguing why his name should be removed, Maher said.

Winship was supposed to get 180 days to file in court because he was put on the list after April 30, 2018, but the attorney general erroneously said he would only have 90 days, Maher said.

“We have contacted the attorney general to rectify this mistake,” Maher said. “When this litigation concludes, we believe our client will be removed entirely from the list.”

“They don’t make a secret about a dirty lawyer.”

Sisti said the law is only three months old.

“I think everybody is culling though their client list and trying to cross check. There’s a lot of work to be done,” Sisti said.

One name on the list that was removed from the public list the same day, James McLaughlin, stood out to Sisti. The reason given for McLaughlin’s listing was falsification of records in 1985.

McLaughlin made a reputation statewide as a Keene police detective using the internet to catch sex offenders.

Sisti said McLaughlin testified against several of his clients. McLaughlin would often pose as a teenager in online forums.

McLaughlin was the lead investigator in the case of former Catholic priest Gordon MacRae, who was convicted in 1994 on five counts of sexually assaulting a teen boy.

MacRae has continued to claim he is innocent and says McLaughlin offered to pay cash to one of his accusers during the investigation.

The issue that landed McLaughlin on the list occurred in 1985. Sisti said he and a number of other attorneys with cases in which McLaughlin testified would love to have known about it before he testified. Judges would have wanted that information, too, he said.

Sisti said, “This whole system gives you the creeps.”

Sisti has long maintained there should be civilian review boards to oversee law enforcement.

Reached by phone Thursday, McLaughlin said, “I can’t talk we’re in the middle of getting ready for dinner. Sorry.”

Of the 90 names released on a public list Wednesday morning, the attorney general removed 15 that are again considered confidential by afternoon, according to Associate Attorney General Jeffery Strelzin.

Strelzin said the list was “amended because we were notified afterwards about lawsuits that we were not previously made aware of.” He said 15 names went off the public list because they had filed lawsuits in Superior Court under the new law that allows officers on the list to keep their names confidential as they go through the court proceedings.

The new law went into effect Sept. 24 and gave officers either 90 or 180 days to file in court depending on when they were listed.

If they didn’t file in court, the names of the 90-day group became public Wednesday. In three months, more names are expected to become public although the attorney general still hasn’t determined how to handle officers on the list who are deceased.

Some officers may not still work in law enforcement.

The attorney general’s office has removed 29 names from the list since 2018 using an internal process separate from the court, with half of those taken off after the new law went into effect.

The Center argued the new law strikes the wrong balance between the public’s right to know about the functioning of law enforcement officers and departments where serious misconduct allegations exist versus the privacy of individual officers. The state has asked that the case be dismissed.

Melone believes there will be cases in which prosecutors didn’t disclose Laurie issues.

“We expect there will be instances in which disclosures were not made. We hope the attorney general will establish a process by which those who no longer have an attorney are able to ascertain if any of those named were involved in their cases,” Melone said.

Melone said the secrecy behind the list over the years has fostered a perception by the public that law enforcement will protect even the most egregious conduct of their colleagues. “These records deserve no special protection,” Melone said.