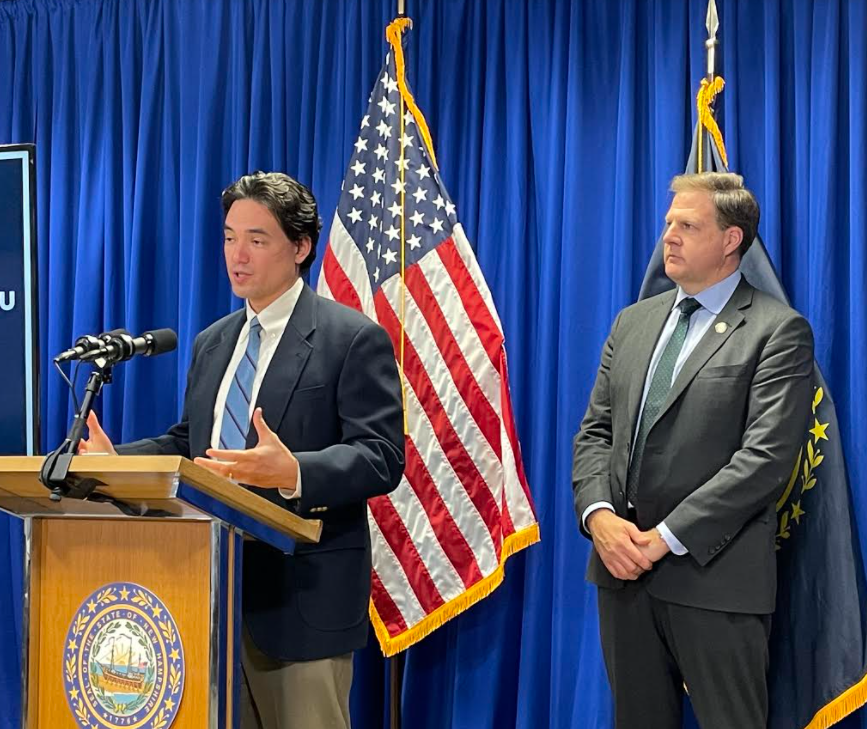 State epidemiologist Dr. Ben Chan speaks at a news conference last month in Concord with Gov. Chris Sununu behind him.

CONCORD – After visiting one of the state’s hardest-hit hospitals Thursday, Gov. Chris Sununu announced more opportunities to get a COVID-19 booster shot in the coming weeks and said more in-home testing and more medicine to keep people out of the hospital are on the way.

Sununu who went to Elliot Hospital in Manchester to meet with hospital staff, new federal help, and witness the struggling health-care system himself, announced at a news conference in Concord Thursday that on Saturday, Jan. 8 there will be another statewide Booster Blitz opportunity for perhaps as many of as 10,000 residents at about 10 sites.

He said he is adding six new fixed sites for boosters and vaccines if federal funding is approved by the Executive Council next Wednesday.

This will be in addition to existing fixed site locations which are seeing high volumes this week as people prepare for the holidays and the new Omicron variant, which has been found in three residents.

Sununu also blasted two Democratic lawmakers who are physicians who have criticized his handling of the pandemic recently calling it silly “partisanship.”

Marsh, D-Wolfeboro, said Sununu pointed out that contracts need to be signed before new vaccination sites can open.

“Thus, they will take a couple weeks to set up. People who get vaccinated there won’t get a boost in antibodies for another two weeks. So this plan won’t even begin to help our struggling hospitals for another month. Like we said yesterday, that’s too little, too late,” Marsh said.

“Our citizens and our hospitals need help now, not a month from now,” Marsh said.

As a hospital trustee since 2004, Marsh has seen the problems they are facing.

“Our hospital, like all the others, is inundated with covid patients and also put out a press release yesterday,” he said. https://www.hugginshospital.org/resources/news/beds-overfilled-while-staff-support-each-other-at-huggins-hospital

Sununu called out Marsh and state Sen. Tom Sherman, D-Rye, who held a press conference Wednesday critical of Sununu’s recent leadership on the pandemic. Sununu told them: “Shame on you,” calling it Democratic partisanship.

Sununu said one of them in recent days shook his hand and congratulated him for his leadership during the pandemic.

Sherman said it is clear that New Hampshire is leading the nation in COVID cases and its healthcare system is being stretched beyond its limits.

“It is our belief that New Hampshire could and should be doing more and we have made our recommendations clear,” Sherman said after the press conference, thanking all of the workers on the front lines.

The new fixed sites to complement the handful that already exist “will allow for thousands more boosters a day across the state,” Sununu said.

The first Booster Blitz, held last Saturday in 15 locations allowed for more than 10,000 to get the booster shot despite inclement weather. Sununu called it a great success and got his booster at one in Stratham.

About 70 percent of those who are now hospitalized are unvaccinated.

Currently, he said there are 9,607 active COVID-19 cases, about 30 percent of which are among children under the age of 18.

There were also 11 new deaths to report, with only one associated with a long-term care facility.

The total number of deaths of New Hampshire residents from COVID-19 since March 2020 now stands at 1,828.

Chan gave a sobering snapshot of where the state is with the pandemic and where he thinks it is headed.

“But I think with the holidays approaching people are going to be gathering, people are going to be traveling with the Omicron variant emerging and seeing what is happening in other countries like South Africa and the United Kingdom, where Omicron is overtaking the Delta variant, I think that the next several weeks are going to be stressful. There is an increased risk for transmission and the numbers to go up, not only infections but hospitalizations and deaths from COVID-19. There is also a lot of uncertainty now…and it is a difficult period of time we are in,” Chan said.

Chan said there are now three cases of COVID-19 patients identified as having the Omicron variant, with the first identified Monday in Cheshire County. Two additional were confirmed this week “and there will likely be many to come,” and that, Chan said, should be an incentive for people to get vaccinated against the virus.

Sununu said he is working to try to get FEMA to allow for the medical teams to stay longer than Dec. 23 when they are expected to leave.
“We will make a strong push to keep them here for a little longer,” Sununu said, adding the teams here now are making a great difference in helping support the health-care systems, such as at Elliot.

Using an initiative announced last week to allow nursing homes and long-term care facilities to be guaranteed the Medicaid rate to care for an elderly patient waiting in a hospital bed for federal Medicaid authorization, Sununu said it is already bearing fruit with about a dozen beds being freed up so far.

Funding through the Executive Council will also in the future allow more beds to open up, he said.

He noted his recent visit to Kentucky to see how hospitals there dealt with their surge has proved to be invaluable and that a number of lessons learned have been applied here, including changes in licensure, staff management, and reaching out to non-traditional partners.

The state expects more medicine, monoclonal antibodies in the coming weeks, despite a national shortage.

“These are immensely useful in keeping people out of the hospital,” Sununu said.

Also, he noted that he expects to be able to get about up to 150,000 in-home testing kits for COVID-19 in the coming days.

“We are looking to get hundreds of thousands more and that will likely be released next week,” he said.
“In the future, this is the way to control this spread, with in-home testing,” Sununu said.

The downside of that, he said, is that people might not report that they have COVID-19 and that will skew the statistics on the state dashboard.

Sununu said he learned at Elliot from talking with the staff and some of the FEMA individuals that “hospital beds are not equal.”

If you have a heart attack or stroke, your visit could be three to five days but the average COVID stay is three to five weeks, he said.

“With COVID-19, they take up…an exponential level of burden on the system, which is why we push vaccines,” Sununu  said.