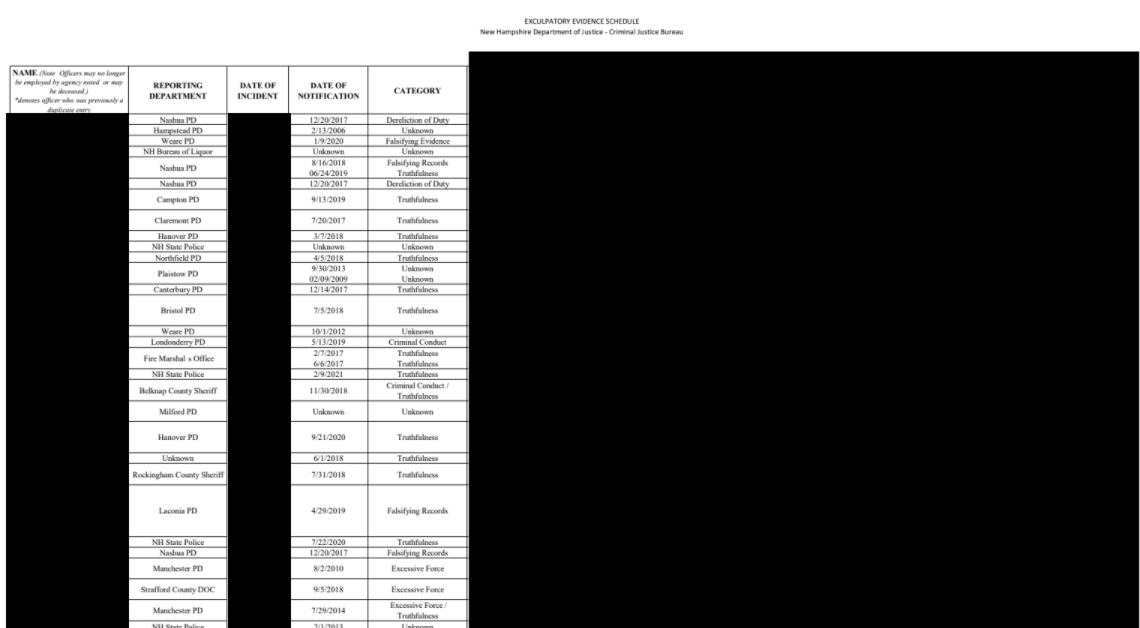 Portion of one of the redacted pages of the Oct. 22 Exculpatory Evidence Schedule, also called the Laurie list. See full list linked in the story.

Attorney General John Formella wants the lawsuit seeking the unredacted 280 names on the Laurie List of dishonest law enforcement officers dismissed, arguing the matter is no longer in dispute because a new law will make the list public anyway.

But the New Hampshire Center for Public Interest Journalism argued the lawsuit must continue because the new law doesn’t truly protect the public’s right to know which officers are on the list, which is now called the Exculpatory Evidence Schedule or EES.

Galdieri filed it in Hillsborough Superior Court South in Nashua on Oct. 25, a month after the new law went into effect.

“(The law) alone dictates when and under what circumstances the EES and entries on it become public under RSA chapter 91-A (the state’s right-to-know law),” Galdieri wrote.

He said through the law, “the legislature has balanced the public’s right to public access to governmental records, N.H. Const. Pt. I, Art. 8, with the reputational and privacy rights of present and former law enforcement officers to create a workable legal regime under which all of those important interests are adequately protected and vindicated.”

The law will ultimately produce a public version of the list “leaving nothing further for this court to do,” Galdieri wrote for the Attorney General’s Office.

Andru Volinsky, representing the New Hampshire Center for Public Interest Journalism, said the new law clearly states that the attorney general isn’t mandated to maintain the list, that it is voluntary.

“The legislature has delegated its entire authority to the agency directly involved in this litigation rendering any protection for the public’s right to know completely illusory,” Volinsky wrote in his objection to the motion to dismiss filed on Dec. 3.

Even if the attorney general maintains the list, “nothing prevents the (attorney general) from discontinuing the EES at any time, including on the day after the instant lawsuit is dismissed,” Volinsky wrote.

Another shortcoming of the law is its challenge provisions, he said.

The law allows listed officers to file in Superior Court arguing why their names should be removed but there is nothing in the law that requires a town department whose chief placed the name on the list to defend against a de-listing lawsuit or the funds to do so.

“It is a party to this litigation, the (Attorney General’s Office), that enjoys absolute discretion to step in and take over the defense of the de-listing suit or to let the matter be defaulted because there are more pressing needs,” Volinsky wrote.

Volinsky pointed out that the attorney general doesn’t always follow the new law and has already removed 28 names from the list through its own internal process, not the court process as detailed in the law.

The public records lawsuit has been in the courts for three years.

Hillsborough County Superior Court Judge Charles Temple has already ruled the Laurie List to be a public document. Then-Attorney General Gordon MacDonald appealed to the state Supreme Court, which also found it is a public record, but sent it back to Judge Temple to rule on whether the officers on the list have privacy interests, which is where it stands now. MacDonald has since been confirmed chief justice of the state Supreme Court.

ACLU-NH and those news outlets filed the original suit three years ago, but they have withdrawn saying they now agree with the state that the new law makes the lawsuit unnecessary, leaving the New Hampshire Center for Public Interest Journalism the only remaining plaintiff.

The List
The Laurie List, or EES, contains the names of officers with sustained discipline in their confidential personnel files that could negatively reflect on their credibility to testify in court.

It lists the departments where they worked or still work, the date their names were placed on the list and a brief description of the kinds of discipline such as dishonesty or excessive force that landed them on the list, but blacks out their names and date of the incidents.

The list is used to flag prosecutors when the name and discipline must be disclosed to the defense in criminal cases as it can be considered exculpatory evidence or evidence favorable to the defendant.

If such information isn’t disclosed before trial, a conviction could be overturned as happened in the case from which the Laurie List draws its name.

In 1995, Carl Laurie’s murder conviction was overturned because the lead investigator in the case in the Franklin police department then was known to have serious undisclosed credibility issues.

Volinsky said the balancing test required to determine an invasion of privacy tips heavily in favor of the public’s right to know and in support of disclosure.

“(T)here are no privacy interests at stake for some listed officers and that for others, any privacy interest at stake is outweighed by the public’s right to know. The Court should order the release of the EES,” Volinsky concluded.

Solicitor General Galdieri detailed the law’s process in which an officer can file in Superior Court to have his or her name removed from the list.

The law provides that once a judge has ruled in each case, after exhausting any appellate rights, the individual’s name and corresponding information will become public with two exceptions, Galdieri wrote.

Disclaimer: The nonprofit New Hampshire Center for Public Interest Journalism, which publishes InDepthNH.org, is the remaining plaintiff in the public records lawsuit.