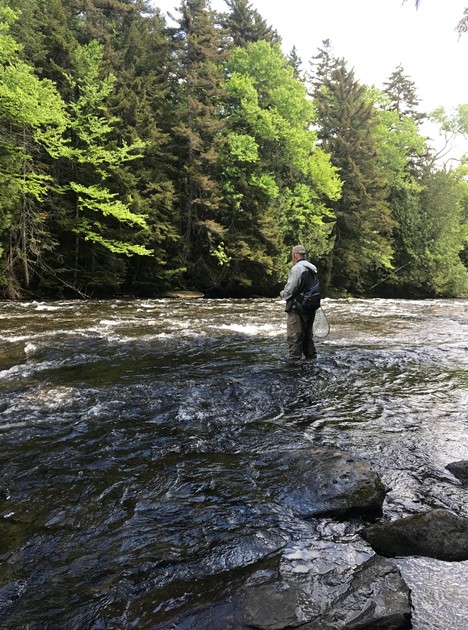 Enjoying a beautiful day on the river.

It was a beautiful Fall day and yardwork awaited. I trimmed a few bushes, raked a few leaves and took a trip to the Recycling Center.

I had other tasks on my “To Do” list, but in the back of my mind, all I could think about was being on the river. I had some time so I went in and checked the New Hampshire Fish and Game website for Rivers and Streams with Special rules.

This section contains a list of rivers and streams that you can fish, catch and release, until they all open again Jan. 1. I saw a section of river that I had not fished for a while and which was on my way to an appointment later in the day. This section of river was a little bit of a hike to get in and out but featured a nice little waterfall.

A perfect trek for a beautiful day.   Fly fishing is a nice reprieve from all the daily chaos and as we like to remind ourselves, first world problems. I took my time walking into the river. I wanted to take in every moment. The sun was warm and the colors that were still hanging on were amazing. What made me enjoy this time was that I knew what was coming.

The water was running high and fast, most likely because the powers to be were lowering the lake that fed into the river. As I was sorting through my half-empty fly boxes, I was reminded that the guys who make a living from tying flies were having a difficult time getting materials to keep up with orders. It was something to do with a supply chain. I was bummed. Now I had to ration my flies until I could find more of my favorites.

As I was thinking about it, the supply chain dilemma has been with us for a while and most likely will continue to be. I was shopping at the Orvis Outlet in Kittery recently and when I arrived at the fly fishing section it was bare. In a panic I asked if they were closing the store? Their response was in the negative, they were not expecting any large deliveries until Spring. Kittery Trading Post, across the street, had a better selection, but was sparse for them.

Now my mind was running ahead, what about Christmas? If I waited until Black Friday to shop, would I be too late? It might be a gift card Christmas. I like to shop local and I am not a big on-line shopper. I enjoy seeing my friends at the local fly shops and hearing about the new equipment coming in and what rivers/ streams are fishing well.

I decided to start nymphing. I tied on a size 16 Tungstun Pheasant Tail with a size 18 Perdigon dropper. I worked a section of the river without any luck. With the few minutes I had left, I put on a Streamer and worked another section of the river, again with no luck. As I walked back to my truck, I found consolation in the beauty of the day and the fact that a bad day fishing is still better than a good day at work. As I arrived at my truck, a gentleman asked me if I had any luck?

I replied “No” and then mumbled something about the supply chain crisis affecting the fish.