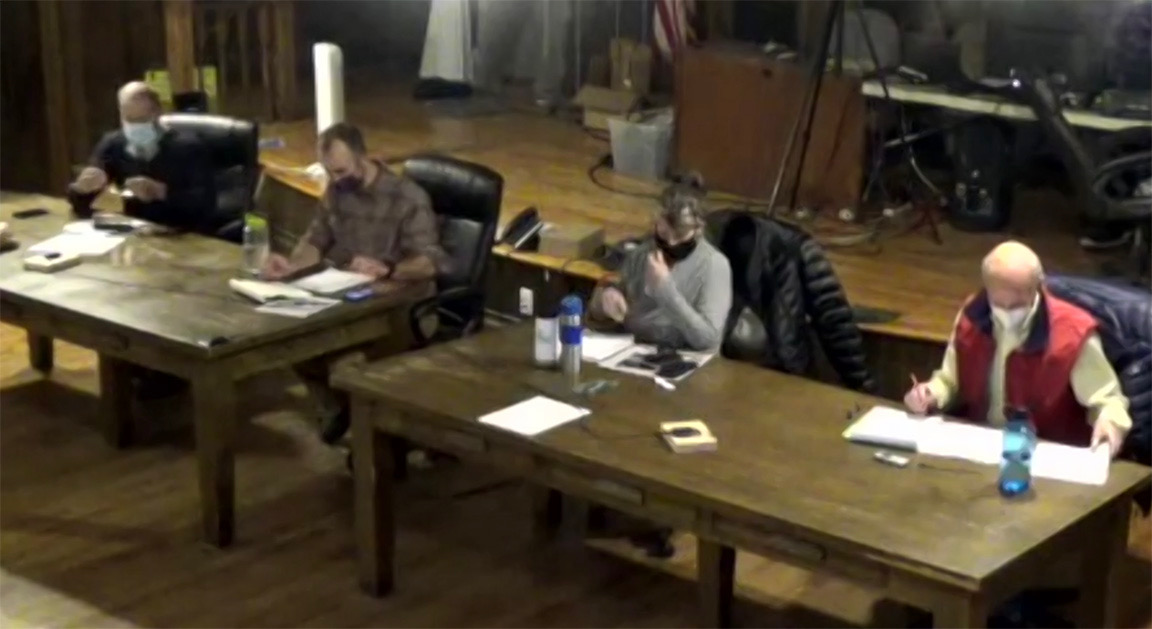 Bethlehem selectmen are pictured at a hearing Monday night.

BETHLEHEM — After hearing from a few residents on Nov. 15, selectmen decided to schedule a special forum to gather more public comment on the proposed trucking route through Bethlehem that would serve a new landfill in neighboring Dalton.

There was immediate opposition to the anticipated 102 truckloads of solid waste coming through the town each day — 20 percent more truck traffic than the town already has from haulers going to the North Country Environmental Services, Inc., landfill in Bethlehem.

Joanne Blaney told the board, “I’m just thinking how ironic this is that, when the day comes that we finally get the [Bethlehem] landfill closed down, and then if the Dalton landfill is approved and goes forward, then you will have all this truck traffic going right through our main street in Bethlehem to this new landfill.”

Granite State Landfill, LLC, has applied to the state for permits to build a new lined landfill in Dalton, a project that has encountered widespread opposition in the North Country. The proposed landfill would be located near Forest Lake State Park. Both North Country Environmental Services and Granite State Landfill are companies owned by Vermont-based Casella Waste Systems. The Bethlehem landfill has been cited for permit violations, and a leachate spill in May is under investigation. Residents fear the spill may lead to contamination of the Ammonoosuc River.

Another resident, Randy Smith, told the selectmen he was worried about more accidents occurring on a stretch of Route 116 that he described as a racetrack.

“My concern is in front of my house,” he said. “The road rises up, and they’re constantly passing trucks, and there have been numerous accidents.” Having additional truck traffic, as well as construction vehicles, going along that section of the road will lead to fatalities, he said, warning that Bethlehem will have to respond to those accidents.

Selectman Chris Jensen said that, by holding a separate public forum on the matter, when the board has no other business to take care of, more people could participate or send written comments that the selectmen could then compile and send on to the state, along with the selectmen’s comments about the truck traffic.

Eliot Wessler of Whitefield, joining the meeting through Zoom, supported the idea of holding a public forum, and went on to say, “It’s very clear from internal communications between the [Department of Transportation] and Casella that the reason the trucks are not going to be routed through Littleton is because Littleton has a lot of political power, and they just don’t want to have to tangle with Littleton. They’re willing to tangle with Bethlehem because they think it’s going to be easier to shove towns like Bethlehem and Twin Mountain and Whitefield around.”

There was discussion of the Sept. 3 trucking accident that closed down Route 3, killing Gus Forte, 54, of Lancaster, Pennsylvania, and injuring Christopher Morse, 46, of Carroll.

Rita Farrell said, “This town of Bethlehem was sitting outside and looking at the traffic that went through because they had to be rerouted. It was unbelievable. You could not cross the street. So I think this is a matter of safety and public interest.”

Selectmen settled on a date of Dec. 20 at 6 p.m. for the public forum.