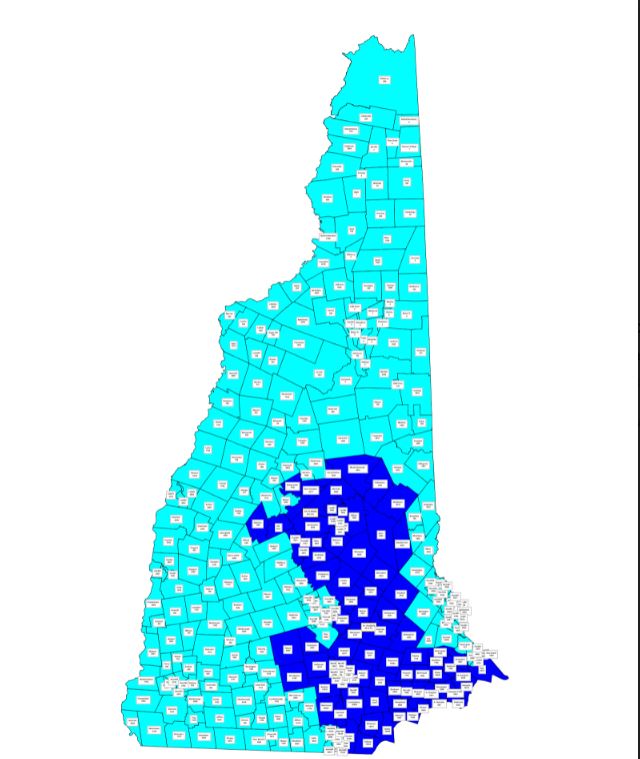 The Republican proposal for Congressional redistricting.

The Republican plan for the Congressional districts would create one certain Democratic seat and one Republican.

The Democratic plan shifts just the town of Hampstead from District 1 to District 2.

The towns moving to District 1 would include Salem, Windham, Hudson, Pelham and Atkinson and also Republican leaning towns east of Concord that are currently in the second district.

Democratic strongholds moved from District 1 to District 2 include Portsmouth, Durham, Dover and Somersworth.

The Republican map looks like a thumb up the middle of the state ending below the White Mountains.

The two plans will be discussed at Thursday’s House Special Committee on Districting which meets at 10 a.m. in Rooms 210-211 of the Legislative Office Building.

Earlier Wednesday at a redistricting committee meeting, Chairman Rep. Barbara Griffin, R-Goffstown, said one of the tenets of remapping is not to consider incumbency when drawing new lines. You could be taking care of yourself, she noted. “You cannot protect incumbency,” Griffin said.

Deputy House Minority Leader and Ranking Democrat on the Special Committee on Redistricting David E. Cote, D-Nashua, said the proposed changes ought to outrage all Granite Staters and he called on Republican Gov. Chris Sununu to veto the plan if it passes.

“The proposed drastic re-drawing of Congressional districts is unprecedented and designed with the singular goal of rigging elections through partisan gerrymandering,” Cote said.

“Their proposal is an unabashed attempt to ensure Republican rule and flies in the face of fair representation for every citizen – a constitutional tenet we’ve all been sworn to uphold as elected officials.” Soucy said.