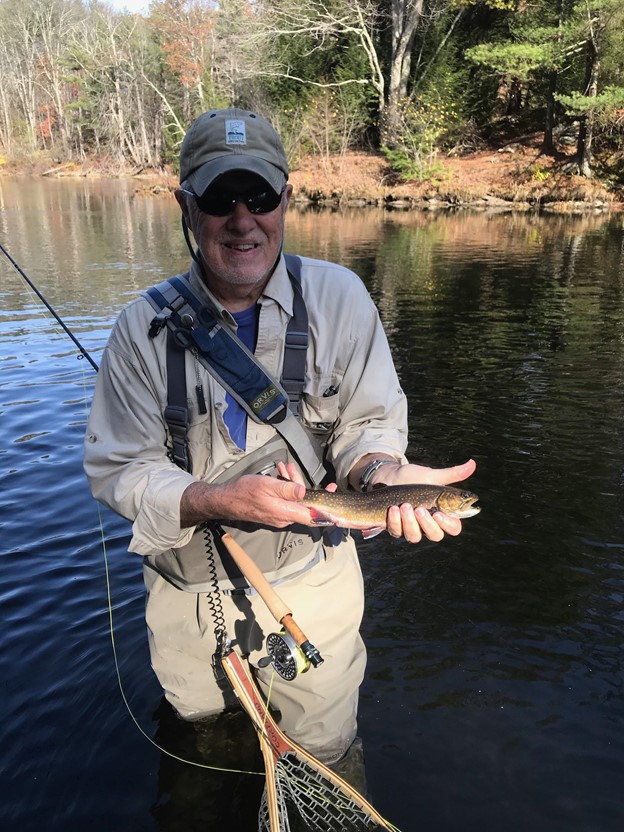 Like so many expectant fathers waiting on the birth of a child, local fly fishers are waiting for the Fall Salmon and Trout runs up the rivers. I have been haunting the tributaries that flow into Lake Winnipesaukee looking for any signs of movement. One of the days that I was fishing one of those tributaries I had no less than ten guys ask me if I had seen anything. “Not yet, but any day soon,” I replied.

I have been fishing the rivers around the lake two or three times a week this last month, waiting and waiting for their arrival, along with a hundred other fly fishers.  There is an immediacy to our waiting since the rivers close at the end of the month. If you enjoy seeing adults cry, just head to the lake October 31 if the fish haven’t arrived.

On my most recent trip up to the lake, I found a group of “Old Timers” and fly fishers pondering the arrival of Salmon. We need some heavy rains and colder water was the consensus. One mentioned that one year they didn’t arrive until almost the fifteenth of November, which was followed by a chorus of moans. On that note I headed up-river to try my luck.

I decided to swing some streamers, so I tied on an orange Wooly Bugger and fished an area that the bigger Salmon and Trout like to hang.As I walked past a young fisherman he pulled in a nice 16” Rainbow Trout with beautiful fall colors.So I was hopeful that the bigger fish were beginning to come up river.

As I was casting, a voice from behind asked how I was doing? I turned around to see my friend, Officer Ronald Arsenault from New Hampshire Fish and Game as well as Northwoods Law fame. He checked my fly to make sure the barb was crimped, since the water I was fishing was Catch and Release Only.

I asked him if the reason he was checking my fly was to let the other guys know what fly wasn’t working. He laughed. We had a nice conversation concerning the Powder Mill Hatchery by Merrymeeting Lake. Officer Arsenault mentioned that the hatchery wasn’t running at full capacity and that it was going to take a big chunk of money for a new filtration system in order get it up and running.

Funding for New Hampshire Fish and Game has always been an issue it seems. They are always looking for ways to generate revenue without burdening the taxpayers. I mentioned that a bake sale was probably not an option. I have always thought that the state of New Hampshire should change the state motto to “Do A Lot With A Little.” That seems to be the New Hampshire way.

As I headed back to my truck for the day, there was a different group of guys checking out the river and opining about the arrival of the Salmon and Trout. I had told them I had just talked to Fish and Game and that he said the State biologists didn’t think the fish would be up for two more weeks. You should have seen those guys cry.