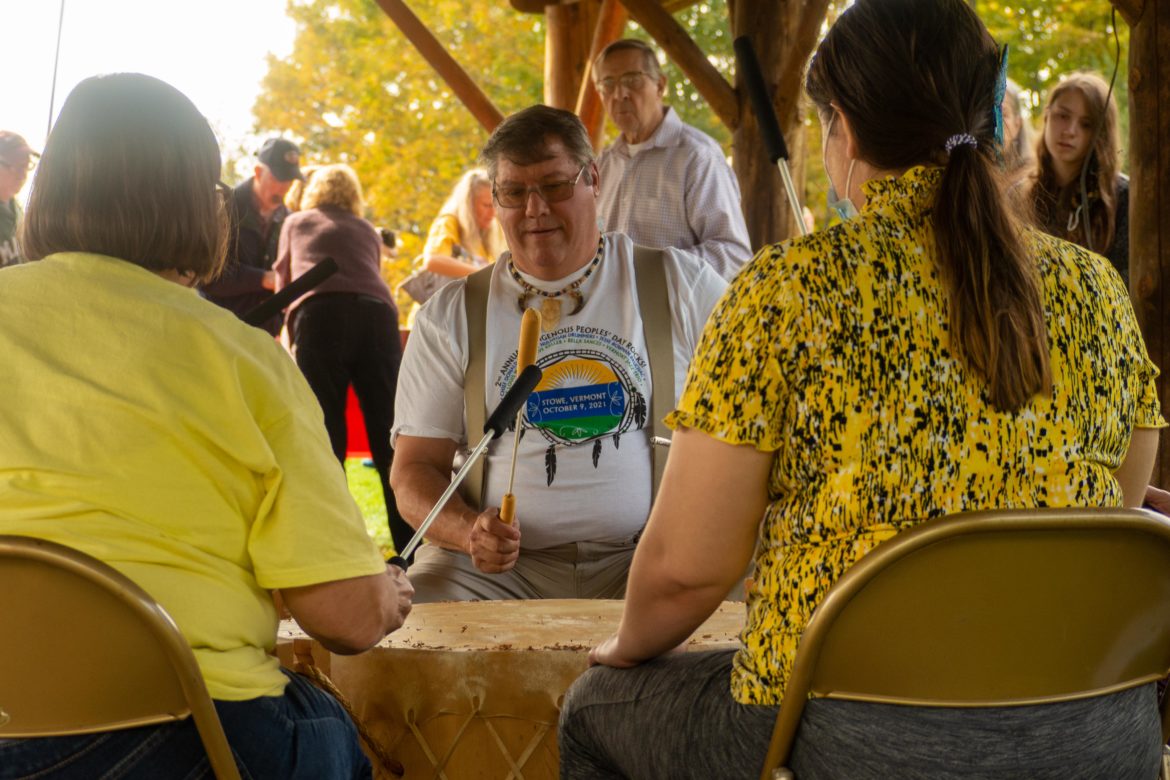 Don Stevens, Chief of the Nulhegan Band of the Coosuck Abenaki Nation.

By Arnie Alpert, for InDepthNH, “Active with the Activists”

WARNER—Local Abenaki leaders and other community members spoke at Warner’s first official observance of Indigenous People’s Day, held Monday at the Mount Kearsarge Indian Museum.  The program focused on the importance of land and recognizing the living history of the region’s first inhabitants.

“We did live here, and we still live here,” observed Darryl Peasley, an organizer of the Abenaki Trails Project, which aims to “visibly honor and share a more inclusive history of the Abenaki people, to highlight historical Abenaki sites and to accentuate the positive influences we have had with Colonial America and the towns we continue to live in today.”

As has become common in recent years, the observance began with an acknowledgment that the land where the event took place was part of the ancestral homeland of indigenous people.  “The Abenaki have lived in northern New England and Quebec for thousands of years and are one of the five members of the Wabanaki Confederacy,” read a representative of the museum.  “Abenaki people were forced off their homeland by European explorers in the mid-1600’s. Many fled to Quebec, others died from European-borne diseases and wars, some were enslaved and others moved on to other areas. But today, Abenaki still thrive and approximately 3,200 reside in New England, continuing to share their traditional values, artistry and respect for nature.”

Don Stevens, Chief of the Nulhegan Band of the Coosuck Abenaki Nation, began his presentation with offerings of tobacco as a gesture of thanks to groups like the Indian Museum that have worked with them in partnership.  His mind, too, was focused on land.

“Our historic western territory goes from northern Massachusetts all the way up through Vermont and into southern Canada across all of New Hampshire over to Moosehead Lake in Maine,” he said, adding as he viewed the surrounding fields and hills, “This is our land.”

The Nulhegan Band won official recognition from the State of Vermont in 2011, as did the Elnu Tribe.  Two other Abenaki groups now have recognition, as well.  Prior to 2011, “we were legally extinct,” Chief Stevens said with a knowing smile.  Recognition conferred public dignity, but “we also needed to feed our people,” he said.  “We decided we needed to get some tribal land.”

The Band acquired 68 acres in Vermont and began work with the USDA and with Sterling College on farming projects.  Other colleges joined in partnership, too, he said, and “last year NOFA [the Natural and Organic Farmers Association] joined on with 15 growers, from not only commercial but individual farmers, and now we’re up to 40.”

It’s disingenuous, he observed, to issue a land acknowledgment statement without providing access.  “The land acknowledgment comes with not just, ‘oh we know this is your land, oh but by the way you can’t get on it.’  If you are going to do the land acknowledgement, if you have land, then we should be able to access it,” he said.  In that spirit, the Nulhegan Band has negotiated permits with a number of public and private landowners in Vermont that enable tribal members to gather plants and other items.

“Our goal is to actually have native lands in our control,” the chief said, so that they can control their own destiny and “always have a place to grow food.”

It’s also important for everyone, especially children, to develop connections to the sources of their food, Chief Stevens emphasized.  “Put a real emphasis on your food sources, your spiritual sources, and the environment,” he urged.

The program included brief comments from Clyde Carson, a member of Warner’s Select Board, and Sara Persechino, Hopkinton’s Town Moderator, who said their towns have given official recognition to Indigenous People’s Day as an annual holiday on the second Monday of October.

Sara Smith of Pembroke and Marian Baker of Hillsboro also described efforts by local Quakers to acknowledge the Abenaki inhabitants of the areas where Quakers settled hundreds of years ago and to articulate a public apology for the brutal mistreatment of the region’s original people.

Sherry Gould, a member of the Nulhegan Band who is also active with the Abenaki Trails Project, suggested that local towns add “welcome” signs in the Abenaki language to their English language welcome signs.

She also called for support of legislation that will be introduced next year to restructure the NH Commission on Native American Affairs.  As it’s currently organized, most of the commission’s members are appointed by the governor.  Under the new proposal, members would be appointed mostly by the officially recognized Abenaki tribes.

When the formal program ended, Chief Stevens led drumming and dancing sessions with children and adults.