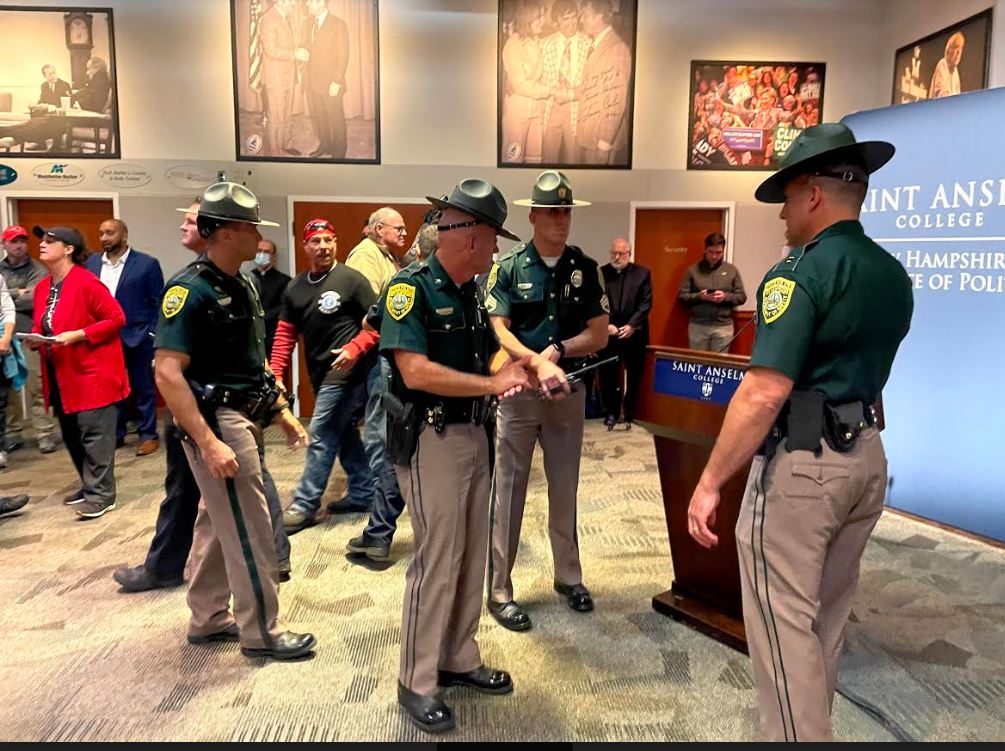 State Police are pictured at the last Executive Council meeting that was cancelled because of an angry crowd opposed to vaccine mandates at the New Hampshire Institute of Politics at Saint Anselm College in Manchester. PAULA TRACY photo

CONCORD —  As New Hampshire continues to see an average of 400 to 500 new coronavirus infections a day, elevated hospitalizations and deaths from COVID-19, anti-vaccine protesters were able to shut down an Executive Council meeting Wednesday to protest mandates.

Gov. Chris Sununu, who did not appear at the beginning of the council meeting at Saint Anselm College, called the group “unruly and very aggressive” and said they crossed a line not seen before.

Although he said there were a few individuals who were very aggressive and threatened state Health and Human Services employees and councilors, there was no attempt to remove the individuals for fear of escalating the situation.

A similar disruption occurred earlier this month at a public hearing on rules for the state’s vaccine registry.

Sununu said he talked to law enforcement and it was decided to postpone the meeting, rather than try to remove the unruly individuals.

“If you start (removing) individuals one-by-one, the whole nature of the situation, if you start doing that, could get out-of-hand,” he said. “It was a very challenging situation.”

Some state employees at the meeting to provide additional information on agenda items, had to be escorted to their vehicles by State Police.

The protest concerned two contracts totaling $27 million in federal funds for the state’s vaccine programs including an attempt to increase COVID-19 vaccinations among the state’s citizens which have stalled in the 56 percent range since May.

Sununu said the council will meet again in the next couple of weeks in a more secure and safe location that would be open to the public but prevent those seeking to disrupt the meeting from attending.

The Joint Legislative Fiscal Committee meeting scheduled for Friday was also going to discuss the same contracts and was also postponed.

Sununu is also canceling his Harvest Fest this Saturday in Walpole.

The Executive Council voted 3-2 to deny the two contracts at its last meeting, but tabled the item, while the Republicans on the Fiscal Committee voted to table the contracts last Friday.

Several “medical freedom” groups urged supporters to protest at the council meeting Wednesday. Many protesters were unable to enter the New Hampshire Institute of Politics at Saint Anselm College, where the council meeting was held due to fire codes.

But some inside the building shouted to stop the contracts, that they knew where state employees and councilors lived and gave their own speeches.

The crowd’s action was criticized by both Democratic and Republican legislative leaders, but the Democrats also said the unruly behavior has been allowed to manifest this year under Sununu and Republican leadership.

GOP state chairman Stephan Stepanek attacked Democrats for blaming Sununu for emboldening the crowd that protested at the council meeting. He called it “a new low.”

At a press conference later Wednesday Sununu said the incident should not be politicized for partisan attacks.

He said he was extremely disappointed in the actions of the protesters who had “crossed a line,” and with the threats against state employees.

“Threatening individuals to get what you want,” Sununu said, “is not good government, and it’s terrible frankly.”

He noted some of the protesters were concerned accepting the money would threaten the state’s sovereignty due some boilerplate language.

Sununu said the same language has appeared in many contracts the council has already approved and does not interfere with the state’s ability to do what it plans to do.

He said the attorney general has been asked to look at the language which he called vague and provide information to the councilors.

“There is nothing specific they are asking us to adhere to,” Sununu said. “This is nothing new. It’s all been done before by both sides of the aisle.”

He said there has been a lot of misinformation about the contracts and other things concerning  COVID-19 often spread on social media.

“There was a lot of misinformation, a little bit of mob mentality, and it went too far,” Sununu said.

He said he intends to sue the Biden administration over the vaccine mandates for federal employees, federal contractors, health care workers at facilities accepting Medicare or Medicaid funding, and businesses over 100 employees.

He said government should not be telling private entities “who they should hire or fire,”

Some of the protesters were from the same groups that picketed Sununu’s Newfields home after he issued a mask mandate last winter.

The protests at this home and planned for his inauguration, caused Sununu to cancel the traditional inauguration ceremony and instead was sworn in with a few people present in the State House and his inauguration speech was broadcast electronically.

Several weeks ago, a press conference called by the Republican House leadership to criticize Biden’s vaccine mandates, also was disrupted by protesters who wanted lawmakers and Sununu to do more to protect them from the mandates.