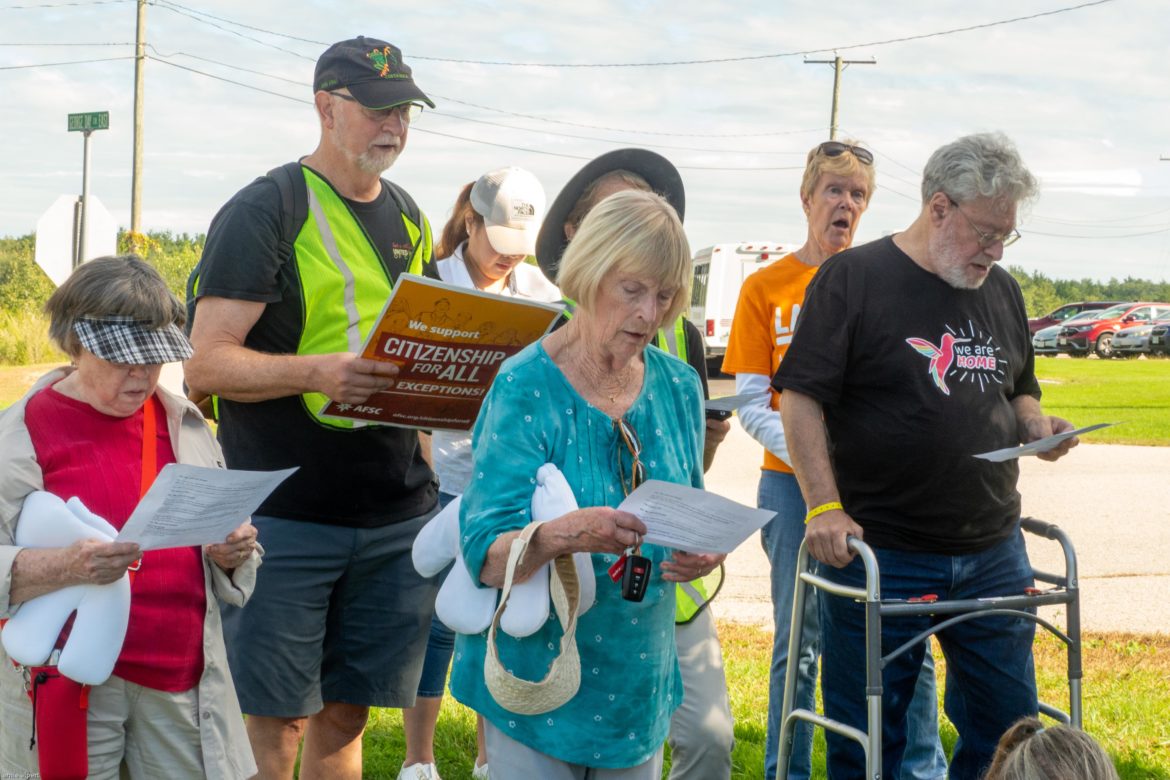 The Solidarity Walk for Immigrant Justice walkers hold prayer vigil Saturday outside the Strafford County House of Corrections in Dover.

By Arnie Alpert, for InDepthNH

The Solidarity Walk for Immigrant Justice ended Saturday pretty much the way it began, with a plea for immigrants and their allies to press New Hampshire’s Senators to actively support a broad pathway to citizenship for millions of undocumented immigrants.

The 3-day event, which began at the Norris Cotton Federal Building in Manchester Thursday and ended outside the Strafford County House of Corrections in Dover on Saturday, coincided with a national “Day of Action” sponsored by the We Are Home Campaign.

Participants prayed, sang, and walked, sometimes in the rain, carrying a banner that said, “We Are Home.  Pathway to Citizenship Now.”   The walkers were accompanied by support vehicles, which drove slowly along the side of the road, offering water, rides to rest rooms, and shuttling walkers between sites.

Saturday’s walk began at the Union Congregational Church in Madbury, where the Maranatha Indonesian United Church of Christ holds its Sunday services.  From there, a group of about 30, including two in a stroller, made their way through six miles of Madbury and Dover roads to the county jail, which serves as an immigrant detention center and has been the site of numerous protests and vigils.   As at other stops, the group paused for prayer, song, and short speeches about the need for humane immigration policies.

This year’s walk focused on winning passage of a broad pathway to citizenship for immigrants.  Although proposals to open a pathway for all of the estimated 11 million undocumented immigrants in the country is not being actively considered in Congress, the budget bill being batted around Capitol Hill could open a pathway for many of them.  Drafts name farmworkers and others who are considered “essential workers,” those enrolled in the Deferred Action for Childhood Arrivals (DACA) program, and those who have Temporary Protective Status (TPS), a category which enables people from countries undergoing instability to remain in the United States.

Martha Alvarado, a GSOP member from Nashua, joined the walk on Saturday.  She walked in earlier years, too, and has also gone to the State House to advocate for a law making it possible for New Hampshire residents without immigration documents to obtain driver licenses.  A naturalized U.S. citizen, Alvarado said she has many friends who are undocumented, or are on DACA or TPS.  They are supporting their families, helping their communities, and paying taxes, she said, often working in restaurants, housekeeping, and other sectors.  “They are needed,” she told me as we walked along Watson Road.

Despite the change in administrations, undocumented residents still live with a fear of detention and deportation.  According to We Are Home, the number of people in detention has increased since the start of the Biden administration, nearly doubling in mid-July.

“They are very honorable people, very beautiful, they don’t do any harm,” Alvarado said.  “They don’t want welfare, they just want to work.”  Alvarado said immigration reform would allow them to get driver’s licenses and remain in their communities with a greater measure of security.

But progress toward immigration reform has been minimal.  Eva Castillo of the NH Alliance for Immigrants and Refugees, who spoke outside the jail and again outside the Maranatha Church, said that since President Ronald Reagan signed an immigration bill in 1986, all the legislative changes have been in the wrong direction.  “Everything that comes is to further close the path that was already a mess to navigate.”

“Call your Senators,” she urged.  “In private they support us, but their vote is not with us.”

Sarah Jane Knoy, GSOP’s executive director, explained the dissatisfaction felt by immigrants and their allies.  “People are more frustrated than ever at the failure of the Democrats to enact meaningful immigration reform.  We understood we were in trouble under Trump, but we don’t feel like we should be in trouble anymore.”  She said the state’s two U.S. Senators and two U.S. Representatives declined invitations to join the walk or meet with the walkers.

Maria Perez, a Democratic State Representative from Milford and an immigrant from El Salvador, shared the frustration.  Speaking outside the jail, she said, “When it’s election time they come around and ask us to vote for them but where are they when we need them?”

Outside her church in Madbury, the Rev. Sandra Pontoh welcomed the walkers and voiced gratitude on behalf of the Indonesian community.  Recalling a fear that even those who had agreed to be placed under an “order of supervision” by immigration authorities could be deported, she said, “You make us feel that we are not alone.”

“You fought for the fifty participants of the order of supervision when they were about to be deported in June 2017.”  Since then, thanks to a favorable federal court ruling, many of the Indonesians have received stays of deportation and won asylum.  “So, thank you,” she said.

Speaking to walkers and supporters seated in folding chairs carefully spaced in a parking lot outside the church, Rev. Pontoh introduced one of her congregants, Andrey Massie of Somersworth.  Saying he was unaccustomed to public speaking, Massie held the audience as he told a story about coming to New Hampshire from Indonesia when he was 7 or 8 years old.

The family had a tourist visa good for six months.  Their plan, he said, was to visit, work a little, earn some money, and return to Indonesia.  But when his dad was diagnosed with cancer, plans changed.  Knowing they would get better medical care here than back home, they chose to overstay their visa, joining millions of other undocumented immigrants. Their status meant they couldn’t obtain lawful employment, couldn’t drive, and couldn’t vote.

But things changed when he reached his teenage years.  “In high school, the biggest thing that made you cool was getting your driver’s license, and that was just not a possibility for me at the time.”  As he watched his friends getting cars, getting jobs, and having fun, he became confused.  “I go to the same school as you guys, eat the same food, we hang out, do the same things.  But why can’t I have what you have?,” he wondered.

The situation changed for the better in 2012 when President Barack Obama established Deferred Action for Childhood Arrivals.  Under DACA, many of those like Massie who had been grown up undocumented in America after being brought to the country as children could apply for special status that would allow them to work, drive, and go to school without fear of deportation.  With help from Rev. Pontoh, Massie applied for DACA and then was able to get a social security number, a driver’s license, and a job.

But the bad news hit when his father had to return to Indonesia, where his health worsened.  Massie explained that he and his mom were able to speak to him over Skype, but the physical separation was painful.  When his dad sunk into a coma, Massie kept his eye on his laptop and watched as his dad passed away.

His voice shaking, Massie recalled the support his father had given him growing up, but “when he needed me the most I couldn’t be there.”

Massie also recalled his dad’s words before he took his final flight back to Indonesia. “His last message to me was to take care of my mom,” he said.  And with DACA, he was able to do it while attending and graduating from UNH.

“It’s been a long road.  It wouldn’t be possible if I wasn’t in the DACA program,” he said.

As a program created by a presidential order rather than legislation, DACA is not a secure status, nor does it provide an opportunity for recipients to become U.S. citizens.

Taking the mic after Massie’s talk, Eva Castillo reminded him that he, too, could call New Hampshire’s Senators so that they get the message, too.   Looking at Massie and pointing to an American flag, she said, “You grew up swearing allegiance to this flag, just like any other American kid.”

Castillo’s closing words were familiar.  “Thank you, and call your Senators.”