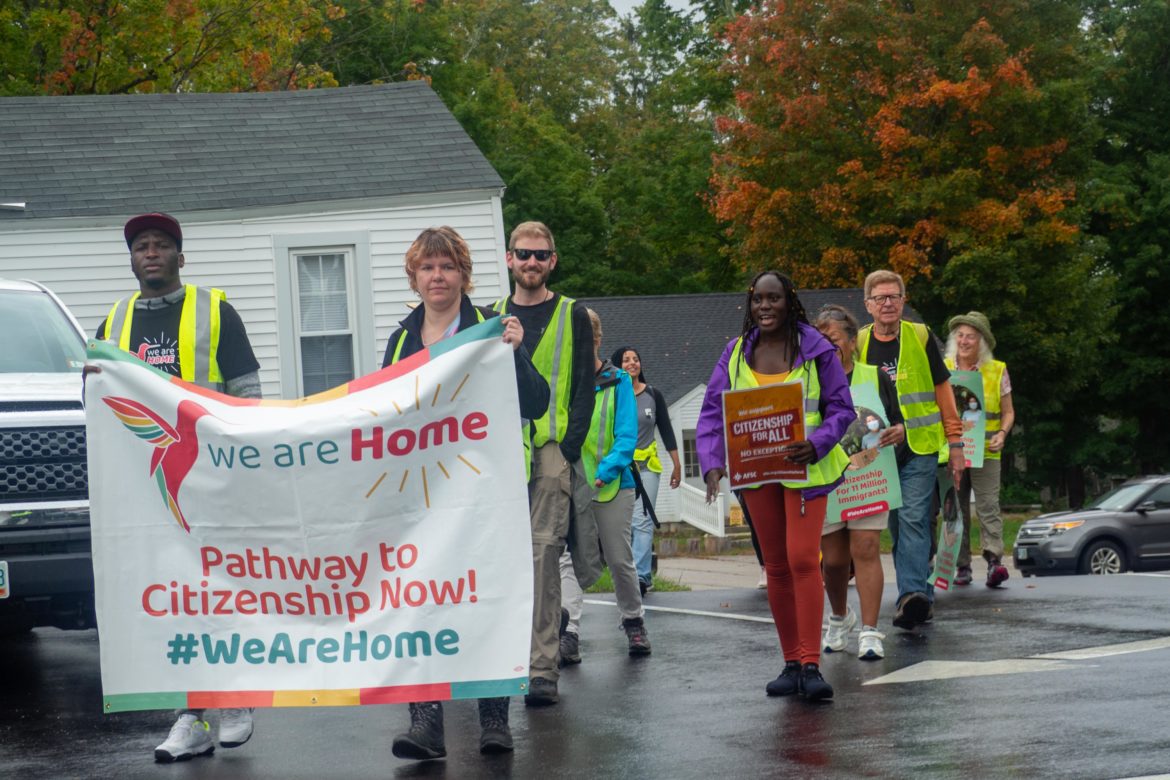 Rested up from the previous day, participants in the Solidarity Walk for Immigrant Justice started day 2 where they left off the day before, at the Northwood Congregational Church.

Sarah Jane Knoy, executive director of the Granite State Organizing Project, began a short program with a reminder that the Immigrant Solidarity Network is a faith-based project.  The walk was part of a “holy mission,” she said.  But there was no doubt it was a holy mission with a political objective:  getting New Hampshire’s Senators to be stronger backers of legislation to provide a pathway to citizenship for as many undocumented immigrants as possible.

Rev. Renee Rouse, pastor at the church, reinforced Knoy’s words with a prayer, calling on God to “empower each and every one of us … to be partners in this solidarity, to make a difference in getting those in power to take it seriously, to move this oppressive block of hatred, this oppressive block of indifference, and move it out of the way, so that your children, of brown and black and beige and yellow could be allowed to have what you always said was theirs, the promised land of freedom.”

With the prayerful words in their ears and hearts, about ten walkers left the church and set out on an eastward path, facing into traffic on the north side of Route 4.  Accompanied throughout the day by three support vehicles, they would continue for about 12 miles, enduring sporadic showers, until they reached the Lee Traffic Circle about six hours later.

Linds Jakows, GSOP’s Immigrant Justice Organizer, said it was the first time they had done a walk like this, not just a few blocks but across miles of highway.  “It really made me think about the stories of the people who have walked for miles for a better life,” Jakows observed at the end of the day.

It wasn’t just the visibility for the Dover resident.  It was also about strengthening relationships with other participants and offering “a way to invite people in to being part of the movement.”

The immigrant justice movement nationwide, coordinated by a coalition called “We Are Home,” is pressing Congress for legislation that would make it possible for several large groups of immigrants – DACA recipients known as “Dreamers,” those with Temporary Protective Status, and those who are considered “essential workers” – to get on a pathway to becoming citizens.

The coalition had been hoping the proposal would be included in the budget bill under debate on Capitol Hill, but the measure is now in doubt following a ruling by the Senate’s parliamentarian that the measure isn’t really about the budget.  But for Jakows, “It’s not about Senate parliamentarian, it’s about how many people are out in the streets and talking to their friends and getting them to put pressure on the Senators.”

From the supermarket parking lot by the Lee Traffic Circle, the drivers shuttled the walkers to the Community Church of Durham, where church members had prepared a meal, served in the upstairs parlor.  After another prayer offered by the Rev. David Grishaw-Jones and an acknowledgment that the land the walkers had tread and where the church stood was the ancient home of the Abenaki, Pennacook, and Wabanaki people, the walkers, drivers, and church members heard a short presentation by Yanovy Hondares Rivalta, a recent arrival from Cuba.

Hondares came to the United States seeking asylum from Cuba, which he said has been ruled by a dictatorship for 62 years. In Cuba, he said, speaking through a translator, “you really have no rights to anything.”  That’s why he left almost two years ago for an arduous journey through nine countries.  “I was hungry, I was cold, I was scared on the journey here, and there were times where I was close to just throwing in the towel,” he said.  He was also assaulted twice, once in Panama and once in Mexico, and had his passport and savings stolen by the Honduran police.

“Thank God I’m here, surrounded by good people,” he said.  But despite the ongoing challenge of getting his asylum application processed, at least he now feels safe.  “I am happy to be here,” he concluded.

The march concludes Saturday with a walk from the Madbury Town Hall to the Strafford County House of Corrections, which serves as an immigrant detention facility under a contract between the county and the federal government.  After a program outside the jail, they’ll return to Madbury for a celebration hosted by the local Indonesian immigrant community.