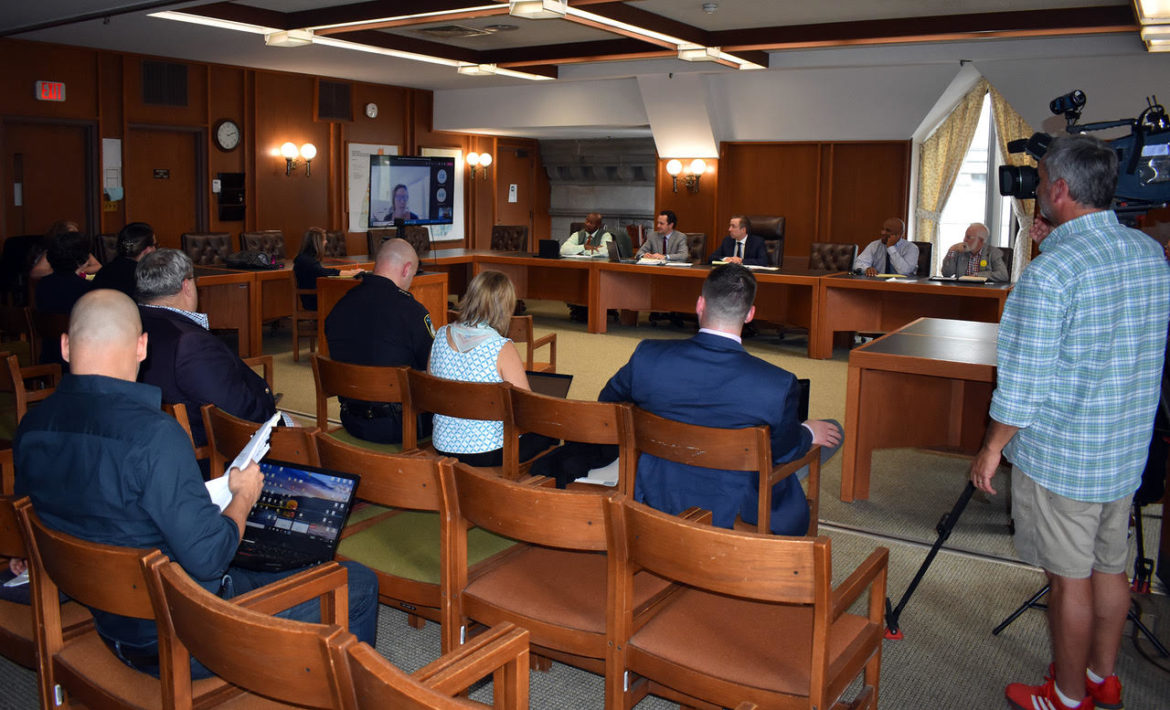 Members of the Commission To Develop Legislative Recommendations Re: Establishing a State Entity To Receive Complaints of Law Enforcement Officer Misconduct met Thursday at the Legislative Office Building.

CONCORD — Among those offering perspectives on how to handle police misconduct complaints on Thursday in the Legislative Office Building was the executive director of the Vermont Police Academy.

A video link allowed Heather Simmons to join the Sept. 23 meeting of the committee charged with studying how New Hampshire should handle police misconduct complaints.

There appeared to be only one person wearing a mask in the room and most of the handful of people attending appeared to be staffers and police officers, not members of the public. Like most legislative meetings, it wasn’t live streamed. Masks are not required in the State House or Legislative Office Building.

Officially known as the Commission To Develop Legislative Recommendations Re: Establishing a State Entity To Receive Complaints of Law Enforcement Officer Misconduct, the committee has been meeting weekly in preparation for submitting a plan by Nov. 1.

This week and next, the committee is seeking information on how others handle complaints and, in October, it will begin laying out specific recommendations.

Simmons was joined by Chief Christopher Brickell of the Vermont Association of Police Chiefs to explain how the Vermont Professional Regulatory Committee handles complaints about officers. Simmons said the council has 17 subcommittees that include “subject matter experts” who help to sort through specific areas of concern.

Brickell explained that the council was formed just a few years ago and none of the complaints has made it to full council review.

First they had to define what constitutes professional misconduct, rather than just violations of minor department policies, which vary from community to community. The council takes only those cases falling into three categories: crimes committed while on duty; serious violations of department policy; and certification problems such as falsifying information or not having certification for certain actions.

So far, all 60 cases they have dealt with have fallen into the middle category, and their reviews are still in progress.

Simmons said the council gets reports from the local departments, with documentation that may include video and audio recordings, and they treat those as confidential during the review process. If there is a decertification recommendation or other action, the officers have a chance to contest the finding, and any documents used in those hearings generally become public record.

Also addressing the commission were Lindsay Courtney, executive director of the Office of Professional Licensure and Certification, and Janet Ackerman, a volunteer serving on the Attorney Discipline Office. They described how they handle complaints as further background on ways that police complaints might also be handled.

Attorney General John Formella, who served as chair of the meeting, announced that next week, they will be hearing from the Sheriffs’ Association and Department of Corrections, then will be holding a brief discussion about their way forward.

State Sen. Sharon Carson, R-Londonderry, who also serves on the commission, noted that, while the deadline to file recommendations is Nov. 1, the legislation will have to be drafted and there will be time to review and revise proposed rules after that deadline.