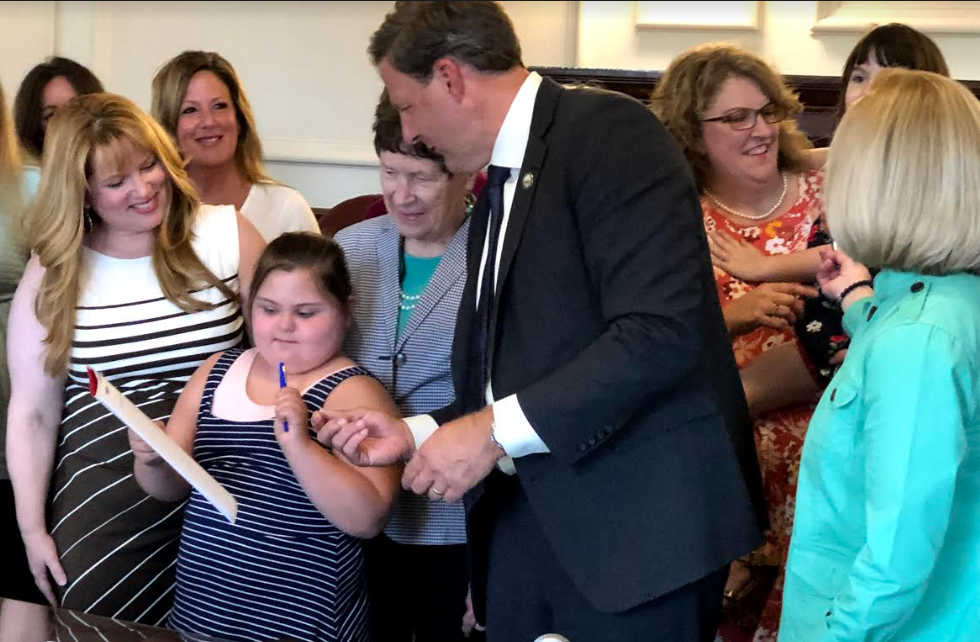 Gov. Chris Sununu signs legislation that will make it easier for parents to get the special education their children need with a little help from Katie Duran of Wolfeboro and her mother Carrie.

CONCORD – Katie Duran of Wolfeboro was beaming Thursday and said she almost accidentally signed House Bill 581 just after Gov. Chris Sununu in celebration of a measure that places the burden of proof in special education on the school system rather than the parent.

Duran and her mother Carrie, who is headed to Nashville to the Miss Amazing Pre-Teen Pageant, stood with other parents and families for the bill signing for a law that also includes the development of a committee to study the special education Individual Education Plan (IEP) and dispute resolution processes.

Sununu said it was a “bipartisan win” for the state that “hits home for a lot of families.”

Sununu said 18 years ago his wife Valerie, a special education teacher came to the table and said: “I am done with the public system because there are so many barriers.”
He said she started advocating for the parents rather than the system and that is what this bill does. Sununu said parents until now have had to navigate a very complicated path to get their children the special education they need.

He was a school principal and at one time was also involved in getting special education services for a grandchild.
“When you look into it as a parent, who has the burden of proof? I did not have access to the piles of information” the school had.
Now, he said, the bill has “flipped the burden of proof.”

He noted in 2005 U.S. Supreme Court Justice Ruth Bader Ginsberg ruled it was not a fair process.

“She got it right,” Ladd said. “Now, New Hampshire is getting it right. We need it. These parents out here need it. Let’s help out our parents and children.”