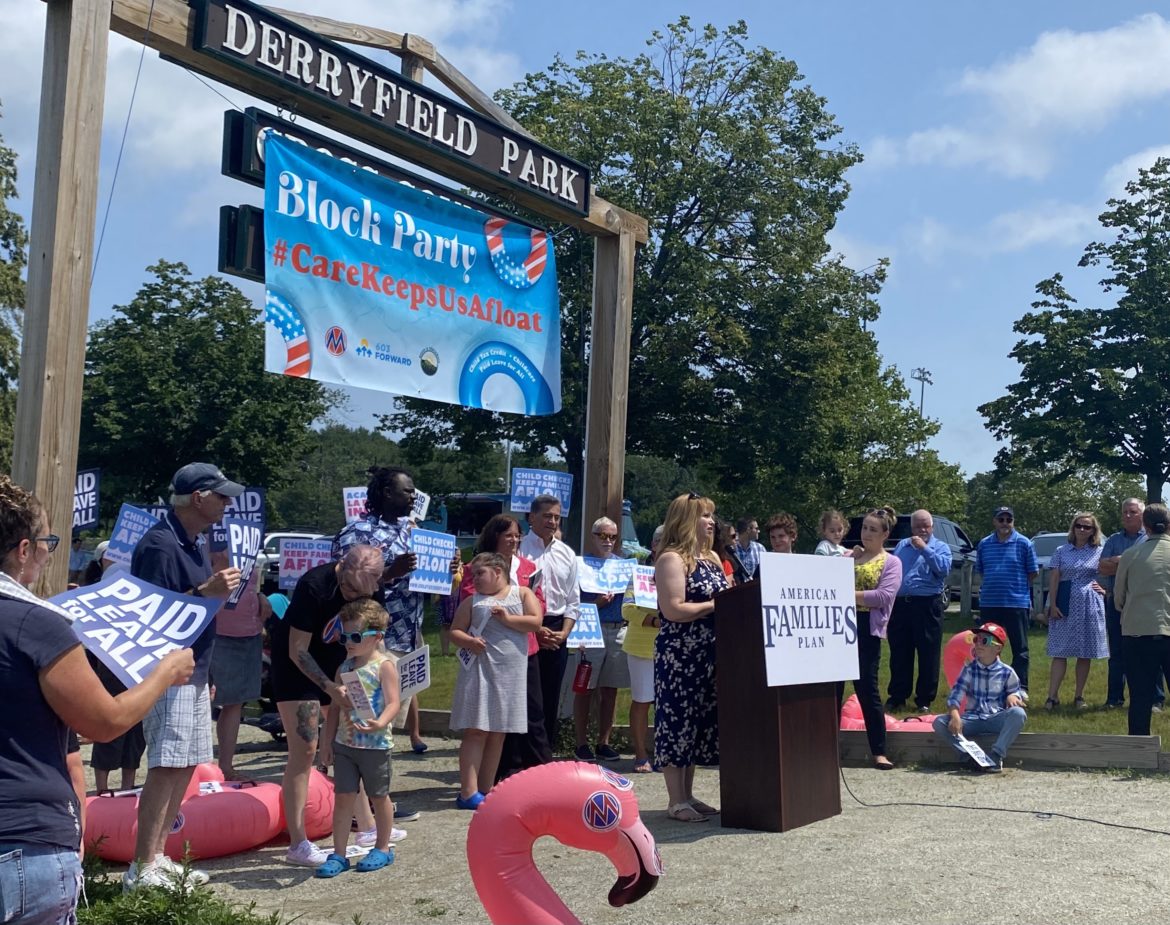 Carrie Duran, a single mom of three, addresses the crowd at a recent Care Keeps Us Afloat block party in Manchester, with her daughter, Congresswoman Kuster, and HHS Secretary Becerra behind her.

“We are here. The checks are in the mail. The money is in the bank accounts. And New Hampshire families need the support,” said Congresswoman Ann McLane Kuster at a recent Care Keeps Us Afloat block party in Manchester, hosted by MomsRising, regarding the Child Tax Credit (CTC) payments.

The event was held on July 15, the day families began receiving the expanded CTC payments recently passed in the American Rescue Plan. The tax credit will provide monthly checks of up to $300 per child for an estimated 130,000 New Hampshire families; it’s available for single parent families earning up to $112,500 annually and for two-parent families earning up to $150,000 annually.

Also speaking at the event was Health and Human Services Secretary Xavier Becerra.

“Guess what? They aren’t going to invest it in some boondoggle in another country. They are going to use it to buy clothes for those kids, make sure those kids have good food on the table, or fix the roof which is leaking again,” Becerra said.

Erin Rose is a Manchester mom who had to leave a dream job during the pandemic to care for her two children, who are now six and 18 months, her youngest being born just months before the pandemic hit. The monthly CTC payments will help her pay for more daycare so she can work more hours.

“I was working at a place that I had really worked hard to get into. I was really sad but in September, I had to quit my job basically because of [coronavirus] and schools being closed,” said Rose, who explained she used paid family and medical leave at the start of the pandemic and worked for three months before leaving her position and filing for  unemployment.

“That’s not why people aren’t going back to work – there’s no childcare,” Rose stated.

Now Rose is working part-time retail at night, after her husband gets home from his full-time job. They accommodate her scheduling needs, and it gives them that little bit extra money for bills or savings. The CTC payments will enable her to afford more child care so she can work more.

Liz Grady is a mom of four – with another baby on the way. She lives in New Hampton with her husband, who works in waste management.

“My husband by the grace of God was still employed, but he was barely working [forty hours]” Grady said.

Her husband had no overtime work, which they had used in the past to put away in savings and cover any unexpected expenses that came up. Plus, all four children were home, with three engaged in remote learning from second grade to middle school.

“Having the extra expense of electricity because of all the Chromebooks running…and our grocery bill and four children home 24 hours a day was definitely another hit,” explained Grady.

For Grady’s family, the child tax credit payments are going to help pay down credit cards and pay the bills they’ve been waiting to catch up on. She said anything left over will replenish their savings, in case of a future emergency.

Carrie Duran also spoke at the Care Keeps Us Afloat event in Manchester. She is a single mom of three, including her daughter Katie, who was born with down syndrome, who was at the event with her. Duran said she got her CTC payment that day, and with her birthday coming up in August, she would use it to get her car inspected and safe and running.

“With working part time and being a single mom of three kids, it’s been pretty tight. We’ve struggled financially quite a bit but with a little love and a whole lot of coffee for mom, we have made it through. We’ve squeaked by,” Duran said.

But that changed when she also had to begin caring for her father, who was diagnosed with Alzheimers, and she became part of what is called the “sandwich generation”.

Duran told the crowd, “That little level of squeaking by became that we were drowning. What would have helped me, my children, my family, is paid family and medical leave.”

According to Christina D’Allesandro, Senior Campaign Director at MomsRising, her organization is working alongside elected officials and communities to push for policies like a permanent expansion of the Child Tax Credit, as well as paid leave for all families and long-term sustained funding for child care.

“A robust care infrastructure is essential to our families and our future, and will lift families, boost the economy, enable parents to work, and create good jobs across the nation and especially here in New Hampshire,” said D’Allesandro.