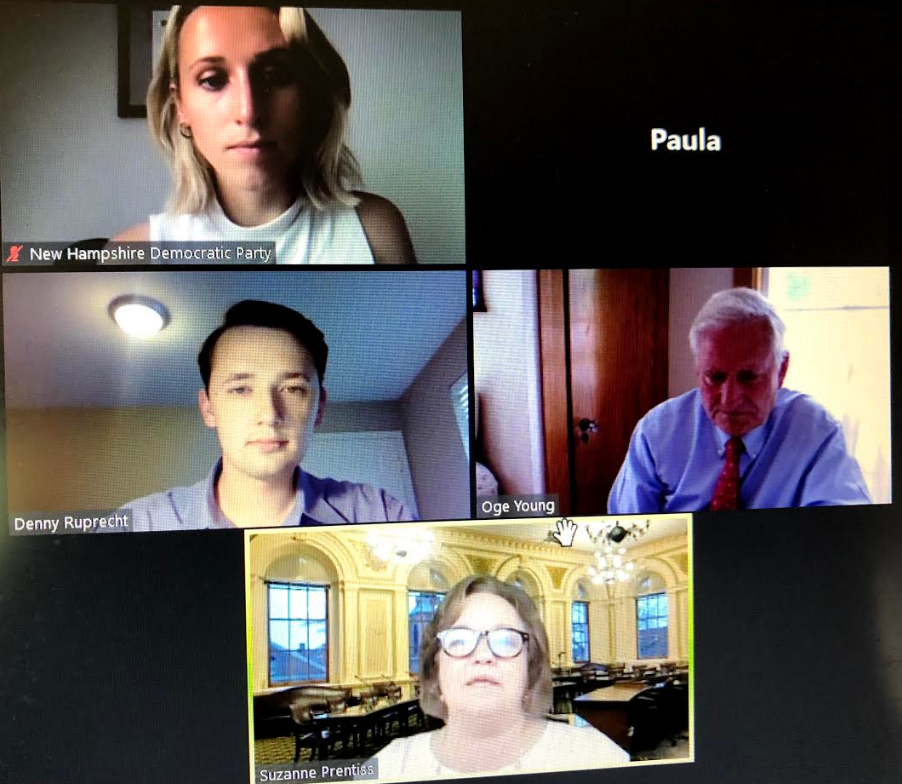 Screen shot of the press conference in Lebanon ramping up the heat against Gov. Chris Sununu after he signed the ban on abortions after 24 weeks of pregnancy.

LEBANON -Political leaders who made abortion restrictions law last week are hearing from retired physicians, local political leaders and citizens who with the backing of the New Hampshire Democratic Party, plan to keep spreading the word.

The Democrats also plan to hold the legislature and Gov. Chris Sununu accountable in the next election cycle.

Through digital media and regional press conferences which began Thursday in the Upper Valley and on the Seacoast, the New Hamp[shire Democratic Party is organizing briefings on the consequences of the Republican-backed legislation signed by Sununu.

They have the “potential to do much harm,” said Dr. Oge Young, a retired OB/Gyn doctor and former head of the New Hampshire Medical Society.

State Sen. Suzanne Prentis, D-West Lebanon, asked: “How are New Hampshire women supposed to feel,” after Sununu, who calls himself pro-choice, signed a $13.5 billion budget that contains provisions prohibiting abortions in the last three months of pregnancy, requires an ultrasound before an abortion and makes it a felony, with up to seven years in jail, for physicians who perform such procedures.

Young said he is “just appalled” that the governor is either misinformed or not telling the truth to the public when he says what he signed is just like other states.

Other states with limits have provisions for cases of rape and incest and do not criminalize the actions of physicians.

The law will have a negative impact on finding physicians to work in New Hampshire when there aren’t enough already, and will deter migration by younger couples, they said.

Before the governor signed the budget, Young said he wrote him “to explain the ban will not prevent any elected abortions and will have unforeseen consequences.”

Young said there are no elective abortions in the state at 24 weeks and the legislation “does nothing but has the potential to do much harm. When a woman experiences the death of her baby late in pregnancy she should not be required to continue that pregnancy until she experiences spontaneous labor. when there is a diagnosis of a fetal abnormality late in pregnancy – usually picked up by ultrasound – that is incompatible with life. There is no reason that woman should not be offered an induction of labor,” he said.

Rep. Denny Ruprecht, D-Landaff, said it will likely take an election and a change of leadership in state government to fix the abortion issue and as Democrats, he said, “we need to hammer away at it” publicly for the next year and a half.

Prentiss agreed, saying “we have to have this conversation and keep this in front of the governor.”

In announcing the plans to make this issue a cornerstone of the election efforts by the New Hampshire Democratic Party, its leader Ray Buckley issued a statement Thursday that the organization is ready to “aggressively hold Chris Sununu accountable.”

The governor has maintained that the new provisions are not unreasonable, that most people agree with him that there should be no late-term abortions except to protect the life of the mother and that this was not his proposal. He also has said he was not willing to veto a two-year state budget which had many tax reduction provisions in it that he liked, for the abortion limitations.