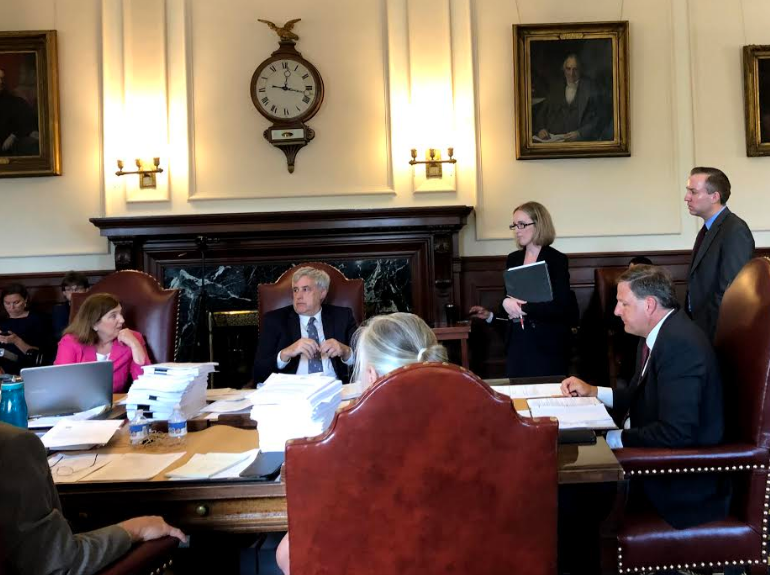 CONCORD – Nurses, LNAs, and other health-care providers facing burnout and other health issues that could impact patient care do not have a professional care provider for those problems after the Executive Council voted down a contract for a rival contractor on the expiration day of the current contract.

Attorney General John Formella said he would immediately begin to work on ensuring there is some care extended until the matter can be resolved.

The council voted 4-1 to oppose a contract with Parkdale Aftercare LLC, Chesterton, Indiana, to manage and administer the professionals’ health program.

The $2,125,000 which comes from fees paid by the licensed individuals and not the state’s money, was to go into effect today.

The current contractor, New Hampshire Professionals’ Health Program, was told in a letter on June 29 from the Office of Professional Licensure and Certification that they were in default of their contract because they were lobbying to retain their contract.

A copy of the letter to NHPHP Participants, considered “Exhibit A” on the default charge, was written by Deanne M. Chapman, MS, PA-C, director of operations for the NH Professional Health Program urging them to call the Executive Council to defeat the Parkdale contract.

Executive Councilor Janet Stevens, R-Rye, was the first to announce she would not be supporting the Parkdale contract noting it was an out-of-state vendor who had no experience in managing health issues related to some health care professionals.

“We need to ensure the best possible care for our providers in their time of need,” said Stevens, noting the past 15 months of the COVID-19 crisis has taken its toll on the health-care professionals of the state.

Executive Councilor Cinde Warmington, D-Concord, was next noting the current provider is trusted.

“This is a program that relies on relationships to work and it works in our state really, really well,” she said noting she believed Parkdale had a conflict of interest that should disqualify it and it had no experience in monitoring physicians.

“That is critically important. We need to know that when physicians returned to the workplace, they are safe,” she stressed.

Lindsey Courtney, executive director of OPLC, said there are not really any other options on the table.
Gov. Chris Sununu asked if there are issues with the current contractor.

“I do have concerns about the conduct during this process,” Courtney said alluding to the default letter she sent on June 29.

It contends that NH Professionals Health Program violated its contract with respect to the confidentiality of records by sending the email to its participants and that participant records cannot be used to “lobby the Executive Council on NHPHP’s behalf.”

“I look forward to the quick and appropriate resolution of this event of default,” she wrote.

Warmington said it is indeed a matter of opinion if they defaulted.

Wheeler asked if contract renewal would not be possible.

Formella said if the decision today is to reject the contract, services would end tomorrow.

Executive Councilor Ted Gatsas, R-Manchester, said the same issue came up last year with the same two providers. Gatsas said he voted against Parkdale last year and he would vote against them again.

Executive Councilor Joe Kenney, R-Wakefield, said he would consider the pandemic and the importance of the existing contractor to help with burnout.

“I have always advocated – we support New Hampshire businesses. I will be voting against this,” he said.

He said he would prefer the state work with the current entity, bring the cost down and get a better understanding as a solution.

Executive Councilor David Wheeler, R-Milford, said it sounded like the contract proposal was going down and wanted to know how long the state would go without services and whether the existing vendor would be willing to continue until a resolution was found.

Courtney said that would be a legal discussion.
Formella said, “we can have a discussion with the current contractors.”

Stevens asked about the process to appeal.

So for now, Formella said they have been issued a letter and asked to act. They may respond to that and the state could meet with them but it would not likely be something that could happen in the next few hours, more likely the next few weeks.

He said the state could ask them to take the risk without a contract and continue services.
Warmington noted there would be an interruption of services if the Parkdale contract was approved anyway.

Kenney suggested they table the matter and the governor noted that would still leave the financial terms on the table.
In the end, the council decided to vote down the Parkdale contract with all but Wheeler voting to oppose.