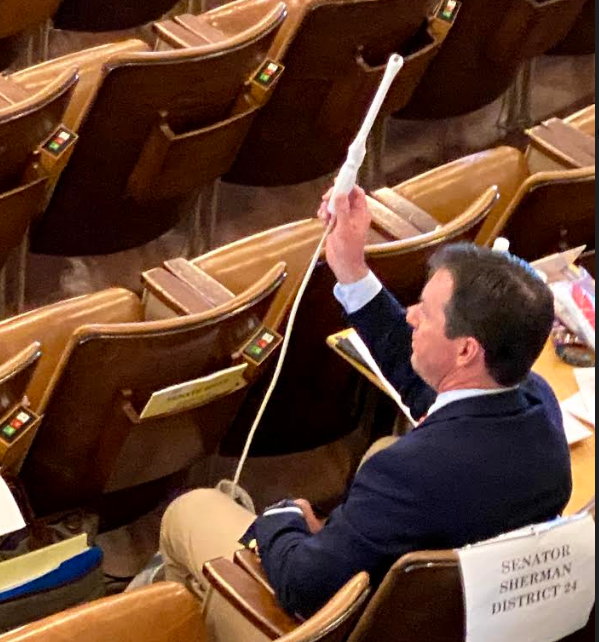 CONCORD — The state’s next biennium’s operating budget was a tale of two cities — it was the worst of budgets and it was the best of budgets — as Democrats and Republicans debated the $13.5 billion package.

Democrats said it would increase property taxes, invade a woman’s privacy, and prevent teaching about racism while failing to pay for the social services desperately needed as the state’s residents come out of the pandemic, like homelessness.

They called the package a blueprint of the far right-wing’s political agenda and Robin Hood in reverse.

“This is a transformational symphony of reform that will rocket our state into the future,” said House Majority Leader Jason Osborne, R-Auburn.

During debates, Democrats focused on provisions to ban abortion, to limit discussions of racism and other divisive issues, school vouchers and tax cuts, while saying the budget underfunds schools and social service programs, while dumping millions of dollars into the state’s rainy day fund.

But Republicans focused on the reduction in general fund spending, the tax cuts that they said would have people keep more of their own money, and meeting the needs of the state within a balanced budget meeting all constitutional requirements.

After the budget passed, Gov. Chris Sununu, who had criticized the budget the House passed but praised the Senate version, said, “Historic tax cuts, property tax relief, and Paid Family Medical Leave delivered all in one sweeping action is a win for every citizen and family in this state.”

But Democratic leaders had a different view of the two-year package.

“House and Senate Republicans have turned their backs on their constituents and passed a budget that represents everything that is wrong with politics in this country today. This is extremism at its worst,” said Senate Minority Leader Donna Soucy, D-Manchester. “This budget tramples on our state and national constitutions by infringing on Granite Staters’ right to free speech, it ends New Hampshire’s unbroken tradition of protecting women’s bodily autonomy, and it turns my home state into a place I no longer recognize.”

“In the end, budgets are so much more than just numbers, they’re about taking care of people’s needs in an honest, responsible way,” Morse said. “We built this budget on Republican principles and reliable revenues, and in the process, we also made certain we took care of the people of New Hampshire.”

The most intense debate centered on the abortion ban after 24 weeks of pregnancy, with very limited exceptions and a mandatory ultrasound for any woman who seeks an abortion at any stage of pregnancy.

Physician and Sen. Tom Sherman, D-Rye, held up an ultrasound device used in a transvaginal ultrasound, one of two ultrasound methods that will now be required of women seeking abortions.

That drew a rebuke from Morse who said, “You are not allowed in the Senate to bring props.”

Sen. Sharon Carson, R-Londonderry, had told colleagues that any woman who wanted an abortion could get the morning-after pill without a prescription, but Sherman said that is only good for 72 hours and any provider who prescribed it for abortions would be committing malpractice.

He said there is a process called “twin syndrome” in which the fetus of one twin may need to be aborted or both will die.

“This bill will result in these deaths,” he said, because it would be a felony for the doctor to perform an abortion on one of the fetuses.

“You are killing fetuses,” Sherman said.

He said there are two types of ultrasounds and described the process for the transvaginal ultrasound, saying a woman must disrobe from the waist down and have the rigid probe placed in her vagina while her legs are in stirrups.

“You are requiring this of women who want to have an abortion. It’s uncomfortable. It’s expensive. Let me be clear this is the probe gentlemen,” Sherman said holding the wand up in the air. “Look at this. You have daughters. You have wives. This is the probe that is medically used. Now you know what are voting on.”

“It literally saved my life, the quality of my life, and no one, especially a politician, should interfere,” said Rep. Amanda Toll, D-Keene. “Why do we create public policy that will traumatize a person who is already a victim?”

The budget also includes a provision that would have the Department of Health and Human Services audit family planning providers to ensure no state money is used directly or indirectly for abortions, or the provider would be suspended until it could physically and financially separate abortion services from other health-care programs.

Rep. Marjorie Smith, D-Durham, said the audit provision is unfunded in the budget and she took issue with a prior claim family planning services are not reduced in the budget package.

“Despite the claims that no funds are cut, there is a cut of $3.2 million for the entire family planning network – a network with the shared mission to provide quality, affordable services to all Granite Staters, regardless of income or zip code, including rural areas which we know are underserved,” Smith said.

Also hotly contested was the provision that would prohibit teaching students or public employees that one ethnic group is inherently superior to another or that one inherently discriminates against another.

While the version in the budget was crafted to overcome objections from Sununu and others regarding HB 544, opponents Thursday said the effect is the same – it prevents young people from learning about diversity and the country’s true history of racism.

“I would love to see a lot of these issues be addressed to be sure we reach an equal point,” said Rep. Manny Espitia, D-Nashua. “But if we don’t talk about it and work on it, we will never be able to do that.”

Rep. Linda Harriott-Gathright, D-Nashua, also objected to the provision saying it would impose an alternative version of American history.

“This is detrimental to free speech,” she said, “which many claim to hold dear.”

Democrats also criticized the provision for “education freedom accounts” saying the plan is the most expansive in the country and will be far more costly than proponents say.

Rep. David Luneau, D-Hopkinton, said the education commissioner estimates the voucher program will cost $129,000 the first year and $3.2 million the second, while the Legislative Budget Assistant believes the potential exposure to the state is about $70 million during the first year. The money would come from the education trust fund that also supports state adequacy aid to all school districts.

Who in a private school or in a home school is not going to seek a payment between $4,000 and $6,000, Luneau asked, noting the program contractor is 10 percent and will likely help with the paperwork.

But several supporters of the account said it would allow parents to find the best fit for their child.

While Republicans touted the tax cuts the budget provides, Democrats said it reflects the Republicans’ true priorities, not the needs of the people of the state.

House Deputy Speaker Steve Smith, R-Charlestown, said tax money does not belong to state government, but to the people who pay it.

He noted the budget package sets a record for the most tax cuts in one budget.

“I care about giving people their money back, that is what matters,” Smith said. “Finding ways to not take people’s money, that is the first thing I am going to do.”

But Democrats said the budget Republicans passed is Robin Hood in reverse as it helps large, out-of-state corporations, the wealthiest individuals, and Republican political donors.

“Unfortunately, HB 2 is a reverse Robin Hood where the state is giving enormous tax cuts to rich citizens and wealthy out-of-state corporations, while ignoring our neediest,” said Rep. Mary Beth Walz, D-Bow. “This budget includes $10 million of taxpayer money to reimburse the reckless investors who got caught up in the Financial Resources Management Ponzi scheme. Meanwhile the priorities in this budget ignore the basic needs of thousands of our citizens.”

Sen. Lou D’Allesandro, D-Manchester, said the hope for New Hampshire returning to normal after the pandemic has been crushed because of repeated unheard calls to spend on problems such as homelessness with 900 school-aged children in Manchester being homeless.

“How can we defund our family planning centers who provide life-saving medical care to men and women alike. How can we emerge from the pandemic with a surplus of over $200 million and choose not to fund essential services,” D’Allesandro said.

The budget package, which now goes to Sununu, who has said he will sign it, includes provisions to close the Sununu Youth Services Center in Manchester, $100 million to offset some of the statewide property tax, $50 million in general funds to shore up the highway fund, and $25 million for affordable housing.

Additional money will go to municipal revenue sharing, which will now be moved off budget and into a dedicated fund, but lowers the rooms and meals tax share for cities and towns from 4 to 3 percent.

And the budget includes $30 million for a new, 24-bed secure psychiatric hospital on New Hampshire Hospital,

A provision to rein in the governor’s authority under a declared state of emergency, nearly sank the budget when the House Freedom Caucus signaled its objection to a compromise worked out in the budget conference committee.

But a last minute letter from Sununu, saying he would work with House members in the fall on greater restrictions on gubernatorial power, may have turned enough votes to pass HB 2.

The House and Senate are in recess and are not expected back in Concord until this fall for veto day.