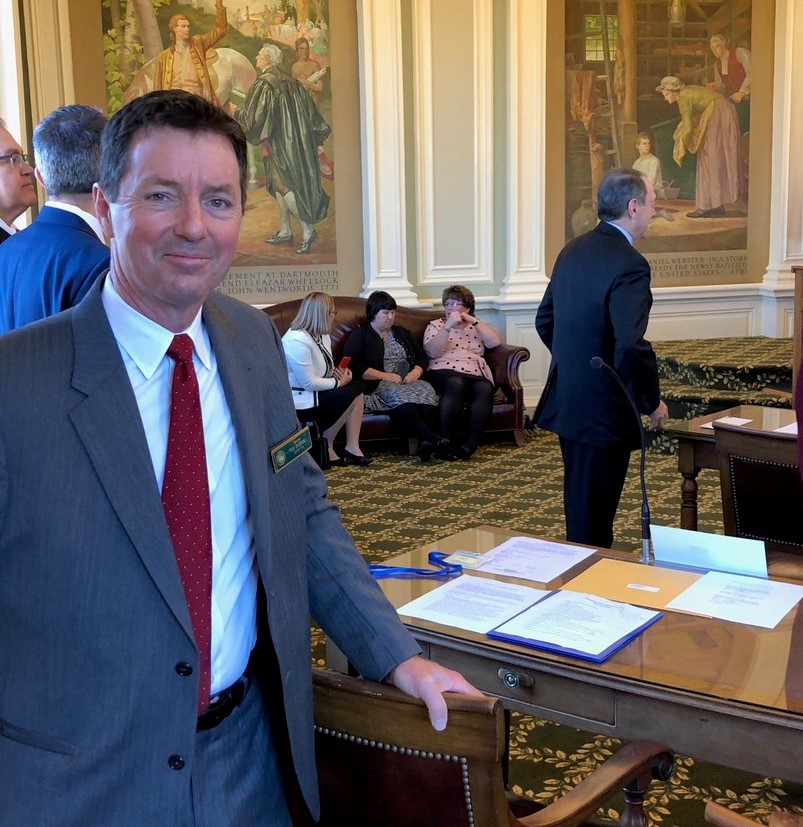 Sen. Tom Sherman, D-Rye, is pictured in the Senate in this file photo.

CONCORD – State Sen. Tom Sherman, D-Rye, says there’s a war against women’s rights being waged by Republican men in the legislature that needs to get more public scrutiny.

“The single most important message to the voters of New Hampshire this session is that there is an attack on women and especially the rights of working women and young mothers that are not being respected,” Sherman said in an interview Friday.

Sherman pointed to the ban on late-term abortions that became part of the proposed budget bill, and two amendments to House Bill 610 that accommodated pregnant and lactating women in the workplace that were stripped from the bill by seven Republican lawmakers this week during a Committee of Conference.

Republican Gov. Chris Sununu will be complicit if he signs these bills, Sherman said. Sherman is also a practicing gastroenterologist.

“It is completely false what the governor is saying that this is compromise. The only compromise here is the compromise on women’s rights,” Sherman said. “It is not the right of the legislature to impinge on women’s freedom.”

Sherman said there is absolutely no evidence that women are getting late-term abortions in New Hampshire except for necessary therapeutic reasons such as when there is no chance for the fetus to survive.

“So, imagine what it must be like to be a young mother late in her pregnancy when an ultrasound shows there is no chance for survival of that fetus – no chance,” Sherman said. “This legislature is forcing that woman to take that terminal fetus to term and go through delivery which is more dangerous than an elective termination of pregnancy.”

The Republican-backed legislation isn’t about abortion, but about the relationship between a woman and her physician, he said.

Sununu, who has said he will sign the budget bill with the abortion ban language, didn’t respond to a request for comment Friday. He has said he is pro-choice but opposes late-term abortions.

“Chairman (Rep.) John Hunt specifically sited the inability to meet except by Zoom as the reason he retained these two bills and they could work on them next year,” Sherman said.

It’s another year in almost a decade of trying to get a woman’s right to workplace accommodations when she’s pregnant or lactating, he said.

Rep. Hunt, R-Rindge, chairman of the House Commerce and Consumer Affairs Committee, said it was “outrageous” to call the committee’s action an assault on women.

“This is not an assault of any kind,” Hunt said.

“Senate Bills 68 and 69 were retained in Commerce. They were upset because they wanted them passed right now so they ran off and attached them to HB 610, which is a housekeeping banking measure and attached four non-germane bills to the banking bill,” Hunt said.

Hunt said there is time to work on the bills and bring them back in January. Hunt said the state Human Rights Commission already deals with protecting workplace accommodations.

“All this does is put it in statute. There is no compelling evidence employers are mistreating” employees, he said.

“This is not an assault, not an attack. That implies changing something. We’re not,” Hunt said. “To say it is an assault is insane.”

He said he was disappointed by the language used by the Democrats.

State Sen. Becky Whitley, D-Hopkinton, sponsor of Senate Bill 69, said the impact on women by COVID-19 has been greater than on men.

“It was very clear that women had been the most impacted group of people during the pandemic. They had to leave their jobs at a higher rate because of a whole host of issues including workplace practices and lack of childcare. My bill was building on years of work started by Sen. Martha Fuller Clark to start putting in place workplace protections for working moms,” Whitley said. “This was the session to do this because we know new moms also leave the workforce because they don’t have appropriate supports.”

Sherman said now is the time to protect women’s rights with an unemployment rate of 2.5 percent.

Sherman said if women complain, it is a good way to kill their career.