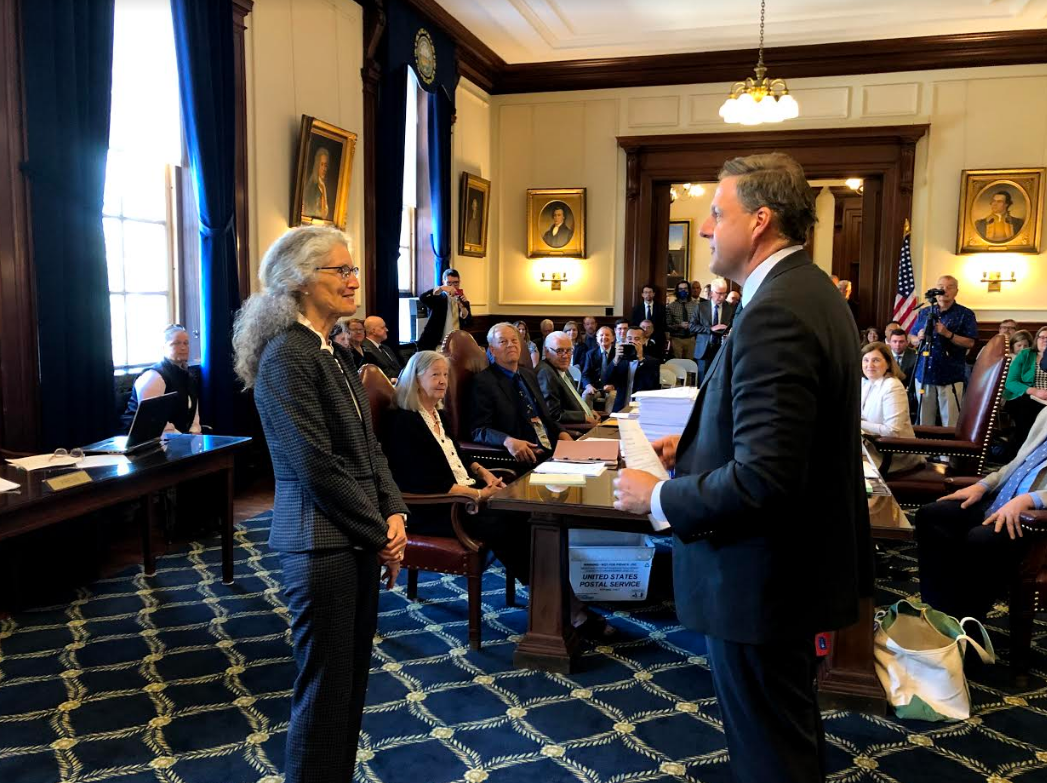 CONCORD – A COVID-19 outbreak at the state psychiatric hospital is slowing progress on the state’s mental health boarding crisis.

Gov. Chris Sununu and the state’s Executive Council were told Wednesday that one of two units at the state’s psychiatric hospital is in quarantine and not accepting new patients.

Lori Shibinette, the commissioner of the state Health and Human Services Department, said while that is impacting the state’s ability to add new patients from emergency rooms, the state is almost fully compliant with a recent state Supreme Court order.

The high court ruled in the case of Jane Doe v. New Hampshire that the state has 72 hours after a patient comes into a hospital emergency room for a mental health evaluation and treatment, and not allow them to languish without services.

The problem has been a lack of state hospital bed space at the front door, and not enough community-based programs at the back door, nor enough efforts to try to head off a crisis before it happens, state officials said.

The Council also got updates on progress to get the state back in shape from the pandemic, met for its first time in a fully re-opened State House, and approved contracts in the tens of millions of dollars from the new federal relief program known as the American Rescue Plan Act of 2021 during the meeting.

“I am excited to welcome Representative Muriel Hall to the Democratic Caucus after constituents in Bow and Dunbarton voted overwhelmingly last week to elect her to the House of Representatives. As a longtime educator who recognizes the value of public education and service to her community, Muriel will be a much-needed voice in the State House and a critical addition to the largest Democratic minority in New Hampshire history.”

It would help divert patients from emergency rooms to centralized access and move ahead of mobile mental health response units to address individuals in crisis in their communities.

The Council and the governor had concerns about the contract and lack of securitization noting it is rare that the state would provide upfront funds of $750,000.

Councilors and Sununu said the state is taking a risk to pay them upfront without collateral from Beacon Health Options Inc. of Boston, which provides similar services in other states.

The company is being contracted to stand up services to operate centralized access and crisis call center for those facing mental health or a substance use disorder crisis statewide.

Katja S. Fox, director for the Division for Behavioral Health within the state Department of Health and Human Services, said the contract represents “one of the highest priorities” within the division to address the so-called “boarding crisis” where those in crisis have nowhere to go now but to wait in an emergency room to get the proper care.

The Council moved to table the motion for at least two weeks and go back and renegotiate the contract to identify what assets the company has to serve as capital to ensure that the state can recover costs if they pay in advance.

“There is no risk on their end,” with the presented contract, Sununu said.
Big Bucks for Beaches

More than $22 million in federal funds for state park upgrades and $21 million more for rail lines in the state were approved by the Executive Council.

The funds, part of the American Rescue Plan Act of 2021, known as “ARPA” or “ARP” are among the first traunch of money coming to the state following the pandemic which will help the state’s infrastructure.
Money is also flowing to cities and towns in two allotments of about $56 million each with each city and town getting a piece of the action.

Particularly helpful is the money for the state parks system which has almost 100 properties across the state with plenty of deferred maintenance to attend to.

Parks are a key economic driver in the state with tourism being a major part of the state’s economy and efforts to bring people here to live, stay and work.

The allotment of federal funds is considerable with lots of money going to upgrade Recreational Vehicle Park electricity and utilities at Hampton Beach, Ellacoya on Lake Winnipesaukee, and Jericho in Berlin.

Also, there is money for Greenfield and Crawford State Parks, $2.4 million for Bear Brook, improvements for signage and sewage in Franconia Notch State Park, and about $615,000 for Fort Stark. Some money is earmarked for Ragged Neck in Rye. About $2.3 million will go to the state’s fire towers. Also, a new sprinkler system will be installed in the main building at Coleman State Park in West Stewartstown with federal funds.

Sununu said there is a lot more money that will come as contracts through the legislative fiscal committee and the Executive Council in the coming weeks and he said it will lead to lengthy meetings.
“Pack your lunch,” he advised.

Back in the State House

For the first time in almost 15 months, the New Hampshire Executive Council met in public at the recently reopened State House Wednesday.

It also eliminated access to the live meeting by telephone, which was used by not only department heads during the COVID-19 health crisis but also many residents who might not otherwise be able to access the meeting. It was a decision made by the Executive Branch.

Legislators still allow remote access to public meetings and a future decision on whether to continue that is up to the Senate President and Speaker of the House.

While the Council continued to meet throughout the pandemic, most of the meetings were at the state’s emergency management facilities with only the governor and a few of his close staff attending.
In recent months, the Council has met at the State House with no public access but remote access.

Sununu posted on Instagram during a break in the meeting a photo of the Council again at the historic table in the Executive Council Chambers. “Back to business as normal at today’s first fully in-person Executive Council meeting (with plenty of paper!)

Sununu told all those in attendance in a packed room with most people not wearing masks, “it has been a quiet and lonely State House for quite some time.”

Only the governor’s staff and that of the Secretary of State, along with the security staff, have been in the building during the pandemic.

On Wednesday, the room was packed.

The governor nominated Christopher M. Keating of Tuftonboro as justice to the New Hampshire Circuit Court. If confirmed, he will serve until the age of 70.

He also nominated Marc M. H. Lachance of Gilmanton to another term to the state Fish and Game Commission.
Geno Marconi Jr. of Stratham was nominated for another term on the Advisory Committee to Marine Fisheries, among other nominations.

Executive Councilor Joe Kenney noted that Henn is returning to New Hampshire after growing up in Concord to return to the state and noted she is bright and articulate.

The Council also confirmed another term for Taylor Caswell of Hollis as commissioner of the Department of Business and Economic Affairs with Executive Councilor Janet Stevens, R-Rye, singing his praises and that of his department from input she has received from her constituents.

The Council approved a transfer of more than $7 million among accounts to pay for overtime shortfalls in the prison system.

Helen Hanks, commissioner of the Department of Corrections, said the state came through the COVID-19 crisis without loss of life for its staff and ranked number two in the nation among many metrics for the care of their inmates during the crisis (behind Maine) but that it is still hard to recruit staff and fill vacancies. There are more people opting for retirement, she noted.

Councilor Cinde Warmington, D-Concord, asked how much burnout was happening for the staff and if there were forced overtime issues.

Hanks said in the last fiscal year there were 300,000 hours of overtime allotted and that was 20,000 more hours than the previous year. She said creative efforts are ongoing to recruit staff.

Hanks did not address the issue of forced overtime.

Warmington asked Commissioner of Education Frank Edelblut why the contract was awarded to that organization when the selection committee had ranked it third out of five potential contractors for its oral presentation.

She noted that the Stephen Group is owned by former Republican Congressional candidate John Stephen and explained that she was only providing oversight as a Councilor to ensure that the contract was not politically motivated and was in the best interest of the state.

Edelblut, a former Republican candidate for governor, said he was not part of the internal process and that the committee chose the contract.