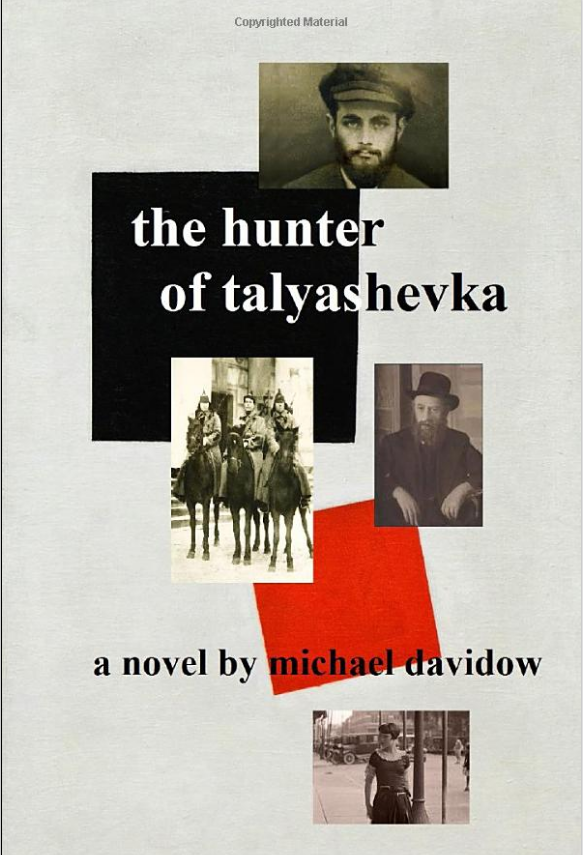 The Hunter of Talyashevka by MICHAEL DAVIDOW

The Hunter of Talyashevka is a most interesting read.  It is basically a story of the history of the Jewish faith within the confines of Russia in 1926.  Author Michael Davidow draws on his very considerable knowledge of history and religion to tell the story of the Jews in Russia at that time and an American journalist who travels to Kiev in search of film locations.

Each of Davidow’s characters add their stories to the mix. The tale is told through a collection of individuals who meet up with a former immigrant who grew up in America and returns to his homeland.

They all connect in one town and travel to Talyashevka on a search for mysterious paintings and velvets that his family introduced him to after they went to America.  The child of Russia returns to Russia on a mission to find them.

Are they real?  The government lends a minder to him as he searches and meets other Russians and the secret police along the way.  At the time they all had different thoughts about Lenin, the Czar, and Stalin.  The reader gets a glimpse of each.

All of the people searching have seen wars, violence and pogroms.  Who fights for who and why?  That is the question.

If you are interested in religion in any shape or form, you will be mesmerized.  Historically speaking, The Hunter of Talyashevka is a marvelous trip back in time and place.

“The train, slow enough to begin with, had finally stopped dead on the tracks. The railroad’s workers did not care to explain what was happening either. They seemed unbothered by the prospect of delay,” Davidow writes in Chapter One inviting us to come along for a most interesting ride.

If you have read Davidow’s other novels, you are familiar with his elegant writing style, one that makes it impossible to put down this book.

Davidow did a very thorough job on the history of the Jews and religion of the period.  Also, it is most enlightening regarding the depth of the Marxist/Communist thought processes. You will rethink the collective mind.

Michael Davidow was born in Boston and raised in Manchester. He graduated from the Johns Hopkins University and the University of Michigan School of Law. After working in both Boston and Washington, D.C., he returned to New Hampshire, where he practices criminal defense. He and his wife Catherine have one son.

The book is available along with Davidow’s other novels through Amazon.com.  He is the author of Gate City, Split Thirty, and The Rocketdyne Commission, three novels about politics and advertising which, taken together, form The Henry Bell Project.  He also wrote The Book of Order.

Monica West reviews books for InDepthNH.org. Monica is known for her love of history and her lifelong love for reading. She has a bachelor’s degree in History, with a minor in English. “My years of reading for leisure and pleasure have given me the insight to read a book and analyze the author’s baggage, cargo and ability to write the language of his/her mind and utilize the gift of prose to educate and entertain the reader. Go get a book, read it and enjoy the adventure.”