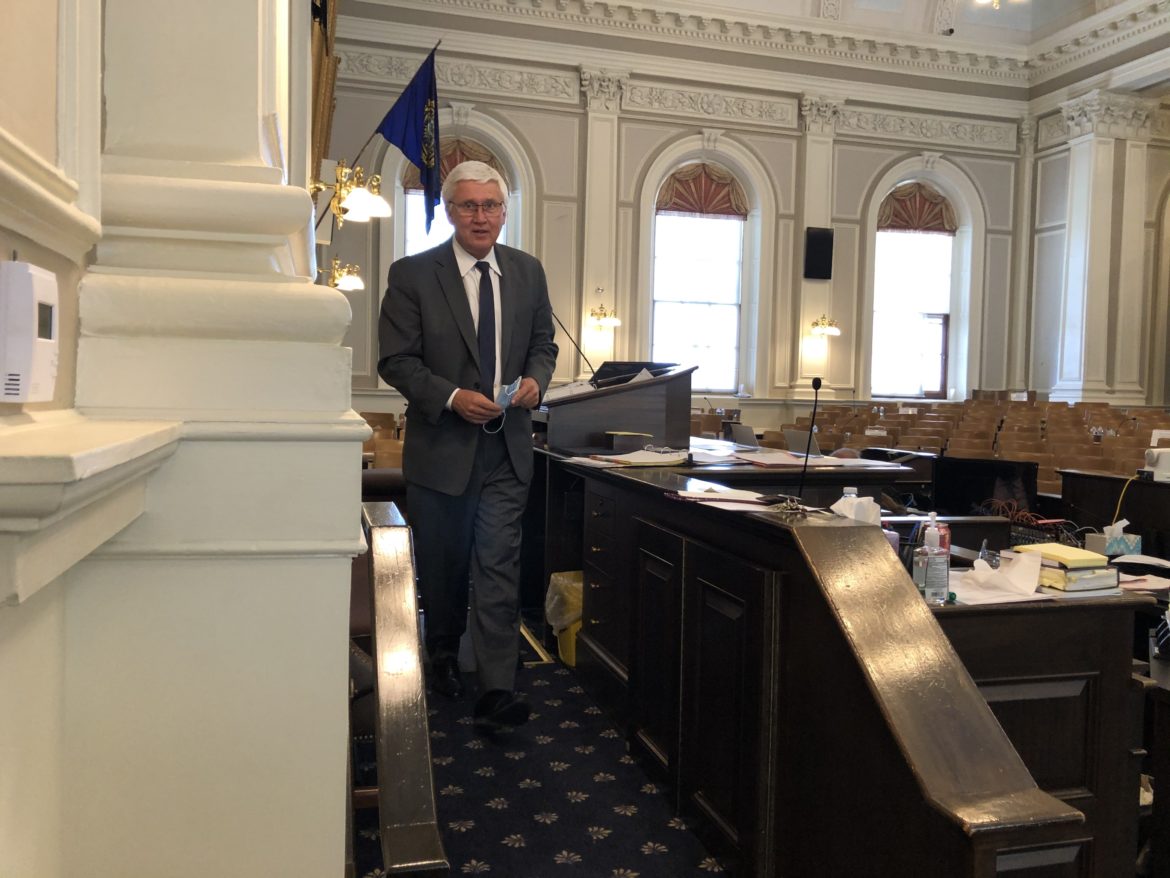 CONCORD — Something must be in the water in Concord as the first debate of the day for the Senate Thursday turned heated and partisan causing Senate President Chuck Morse to call for a five-minute recess to calm the waters and move the bill to next week’s calendar.

Once peace was restored, the Senate gave initial approval to a bill that would allow out-of-state medical marijuana patients to purchase cannabis at New Hampshire dispensaries three times within a year and another bill to expand the rooms and meals tax to on-line platforms for room and vehicle rentals. Both bills will be reviewed by Senate Finance before a final vote.

House Bill 278 would give charter schools first right of refusal on unused school buildings, and will be heard during next week’s Senate session. But before that, two senators tangled over an amendment that clarified the definition of unused facility.

Sen. Bob Giuda, R-Warren, opposed the amendment saying it is a de facto block to allowing charter schools to use unused school facilities.

“A school district opposed to a charter school could put a janitor’s office in the building or rent it out for a private facility,” Giuda said, “so as not to assist a charter school.”

He noted that charter schools are a component of the public education system.

But Sen. Jay Kahn, D-Keene, said he was insulted and had not attempted to gut the bill, but wanted bipartisan agreement on the proposal that has been before lawmakers for several years with no agreement.

He said he was trying to clarify, at the request of some school officials who testified on the bill, what is an unused building.

“We don’t need to do this,” Kahn said, “How great is it that you want to tell the Keene school district how to use its unused buildings. They figured it out and don’t need you to tell them.”

Giuda said every time the proposal has been before the Senate there is an amendment to stymie charter schools.

This is a partisan bill on behalf of charter schools to provide them an opportunity to use a school building, Giuda said, noting it only gives them the right of first refusal.

Sen. Tom Sherman, D-Rye, said he supports charter schools but does not believe the discussion has to be partisan or generate unfortunate name calling and accusations, which Giuda objected to, and Morse called for a recess.

The Senate initially approved House bill 605, which allows an out-of-state medical marijuana card holder to purchase cannabis at local dispensaries up to three times in a year.

Originally Sherman objected to the plan because it requires a patient to have documentation from a physician to receive more than the three purchases, or authorization from a local physician.

He said someone transferred to the state for a short time may need more than three purchases, but said Thursday he now understands the reasons for the requirement. Sherman noted a person who qualifies for the program usually purchases their cannabis once a month.

Some Senators were concerned other states may have a more robust list of qualifying conditions than New Hampshire so sought to limit an out-of-state patient to three purchases a year in New Hampshire.

Sherman said after discussions with stakeholders there is a need for the bill to move forward before this summer.

The bill also allows Canadian citizens to purchase cannabis in New Hampshire under the same requirements as out-of-state patients.

And the bill adds opioid addiction as a qualifying condition for the program.

The bill passed on a voice vote and now goes to Senate Finance for review before final passage.

The Senate approved House Bill 263 which would eliminate the state’s voluntary campaign finance spending limits and increase the threshold for reporting and for individual contributions.

Sen. James Gray, R-Rochester, said the bill would reform some of the state’s complicated campaign finance laws and create more of a level playing field for those running for office.

Raising the threshold for reporting from $500 to $1,000, especially for lower tier races, will mean a number of campaign committees that now are required to file with the Secretary of State’s Office will be exempt from reports which makes campaign financing less transparent, she said.

The Senate also approved House Bill 285 which requires the Secretary of State to use the United States Postal Service data base to check addresses of voters and inform city and town clerks of changes.

Soucy had raised some issues with the bill earlier this month and the election committee changed the bill to reflect some of her concerns.

She said while she appreciates the committee’s work, she is still concerned there is only one data point used to verify voter addresses.

“There are other matching data points that will yield better results,” she said. “There are better ways of doing it.”

The Senate also passed on a voice vote House Bill 523, which requires a person registering to vote without any identification to have his or her picture taken before the registration is complete.

Supporters said it only mimics the same requirement for those voting using the qualified voter affidavit, and there is provision to avoid duplicate photos.

The three bills will have to go back to the House due to changes the Senate made.

The Senate approved House Bill 242, which changes the definition of adequate education with more specific curriculum like logic and rhetoric, financial literacy, and core knowledge.

The bill also establishes a disparity aid program to help property poor school districts with a large number of students in poverty, although there is no money allocated in the bill.

Sen. Erin Hennessey, R-Littleton, said Senate Finance is working to include the money in its biennial budget proposal for the next two years.

Why hurry with such a key section of the law that guides all public education in the state, he said, when the Senate Education Committee did not hear from any public school officials at the public hearing on the bill.

The Department of Education is in the middle of a study to review the consistency of the state’s statutes, rules and standards and the bill should be dovetailed to that Kahn proposed.

“We keep hearing about change fatigue in schools,” Kahn said, “and this is real evidence why this occurs, we will be redoing the same statute in a year or two when we get the Department of Education report.”

But the Senate voted 13-9 to approve the bill, which has to go back to the House because of an earlier change the Senate made.

The Senate also approved House Bill 486, which updates the low- to moderate-income property tax relief program by increasing the allowable income for parents and the homestead exemption for a home.

The program was created in the legislative package addressing the Claremont education decision more than two decades ago.

The Senate approved a bill extending workers compensation for firefighters suffering from lung or heart disease until the age of 70 years old.

Sen. Cindy Rosenwald, D-Nashua, said due to breathing toxic chemicals firefighters are occupationally more susceptible to lung disease and heart attacks from the stress and from the weight they carry.

“Firefighters are always there for us. Let’s be there for them,” she said.

The Senate approved House Bill 15 which would apply the rooms and meals tax to internet facilitators of auto rentals and room rentals.

The bill changes the requirement of who has to collect and remit the tax from room rentals through companies like Airbnb. Currently each property owner is responsible, but the bill would make the company responsible.

The bill also expands the rooms and meals tax to companies that rent personal vehicles through an on-line platform.

The group currently does not pay the tax.

Bill supporters said it is intended to level the playing field for all auto rentals companies, making the on-line platforms collect the tax as the brick and mortar companies do now.

The bill goes to Senate Finance for review before final action.

The Senate approved a plan to allow biostimulants to be spread on soils in the state.

The new products are used to increase plant growth, but are not chemical fertilizers, said Senate Majority Leader Jeb Bradley, R-Wolfeboro, who proposed the amendment.

But Sen. David Watters, D-Dover, said such a plan was premature as federal regulations are in process now after the agency collected information and testimony on the new products.

But the Senate voted down party lines, 13-9, to approve the proposal.