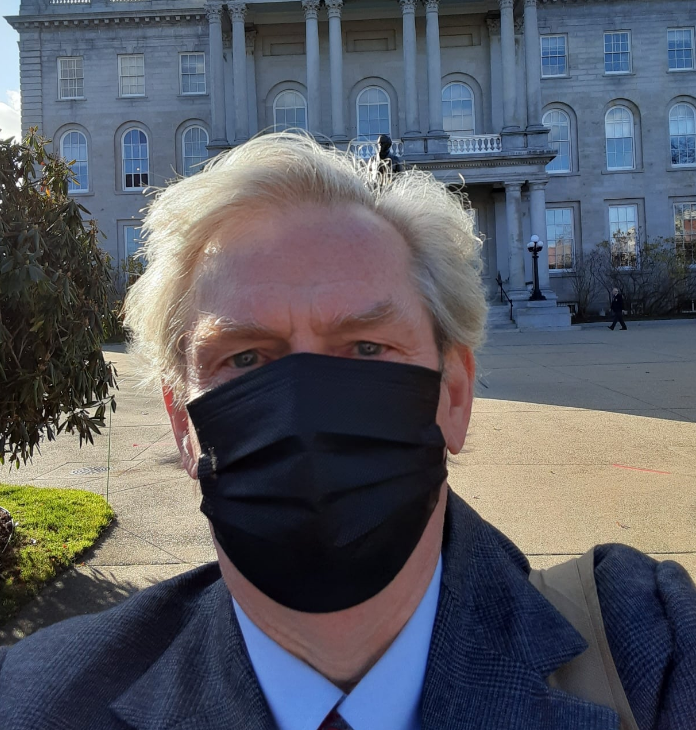 Rep. Walter Spilsbury, R-Charlestown, is pictured in front of the State House in this Facebook photo.

CONCORD — Capping the deductions companies receiving Paycheck Protection Program grants could receive from the federal money may be a possible compromise on Senate Bill 3.

The House Ways and Means Committee members raised their concerns about the Senate bill that would exempt PPP grants from business profits tax liability as well as what might happen if the bill does not pass.

The bill passed the Senate on a 23-0 vote but it has stalled in the House committee as some members believe the bill provides a double benefit for some companies and does not help the businesses struggling to survive.

The committee has discussed a proposed amendment by Rep. Walter Spilsbury, R-Charlestown, saying if a company meets the criteria to convert the loan into a grant by paying to keep employees on the payroll, making mortgage or rent payments, and covering utility costs, then the business would not be able to use the same business deductions to offset gross income under the business profits tax.

Spilsbury said his amendment would avoid a double dip.

“This offsets the initial purpose of Senate Bill 3. It really is that simple, you do not get to use the same expenses twice,” he said.

Without the amendment, the bill does not rectify a wrong, but essentially allows a new round of stimulus, Spilsbury said. But other members disagreed with that assessment saying the issue is forgiveness, as most other states have approved following the federal government, not double deductions.

Rep. Patrick Abrami, R-Stratham, said the amendment negates the bill and the House would be better off killing the bill rather than pass it with the amendment and implying it will do something for businesses when it will not.

“That is not a good appearance for us,” Abrami said. “A lot of businesses are watching this now, it is a hot bill.”

He said the owner or Aroma Joe’s called him and said their biggest problem is finding help, and if SB 3 passes without changes, he would use the money to offer bonuses to attract workers.

“I am concerned about the optics,” Abrami said, noting with the amendment the bill would be “a slight-of-hand without the benefit businesses thought they were going to get.

Spilsbury said he is open to suggestions and said he appreciated the work done by Rep. Dick Ames, D-Jaffrey, to learn what other states are doing, such as Virginia and California.

He noted Virginia is trying to limit the benefit to smaller businesses by capping deductions at $100,000 for those whose loans are forgiven. Several other representatives expressed support for the idea.

California allows grant forgiveness but does not include publicly traded companies or those not having a greater than 25 percent reduction in revenues between 2019 and 2020.

Ames noted New Hampshire probably would not be able to do something similar to California because the state constitution does not allow companies to be taxed differently.

Rep. Edith Tucker, D-Randolph, said if other states are allowing both the grant forgiveness and the deductions, wouldn’t Spilsbury’s amendment put the New Hampshire businesses at a disadvantage, especially in New England.

“All other states have a mechanism, a general or personal income tax and a sales tax to some extent, to recover a substantial portion of what businesses are allowed to keep,” Spilsbury said.

He noted New Hampshire does not have an offsetting way to recover “what we are being asked to give.”

“Corporate taxes are extremely important to New Hampshire,” he said, “much more so than other states. We do not have a sales or income tax to recover these losses.”

Ames lamented the lack of data available to determine the bill’s fiscal impact, saying it is a massive guess.

“The DRA (Department of Revenue Administration) launches an analysis that says it will be a $99 million impact, but there are a lot of assumptions that lie behind that. We cannot penetrate the wall of information sufficiently to get a handle on what is really going to be the impact,” Ames said.

Rep. Susan Almy, D-Lebanon, said she shares the concerns about how the state will look if it does not exempt the grants, and questioned if the DRA would have enough information to separate deductions for loan forgiveness and deductions for normal business expenses.

“Business is watching us like a hawk and it’s spreading around the country (that) New Hampshire cannot make up its mind,” she said.

Noting the committee will meet with representatives of chambers of commerce Wednesday, Almy said she hopes they will provide some clarity on who benefits from SB 3.

“I don’t think a number know what they pay taxes on,” she said, “and what they get out of this.”

Abrami noted business taxes are $200 million more than estimates developed before the pandemic.

“We can afford to pay for this, but my concern is we can’t spend this money,” Abrami said, “we have to find a way some of the money stays there.”

He said the state will have to refund the money if the bill passes.

“We have to have money in the bank,” he said, “it is a question of not spending it in the next budget.”

Major said DRA officials will meet with the committee Wednesday to discuss how much excess funds result from the PPP and other one-time stimulus funds on revenues and how much may be needed to set aside for one-time expenditures or refunds.

The committee has to make a recommendation on SB 3 by May 27.