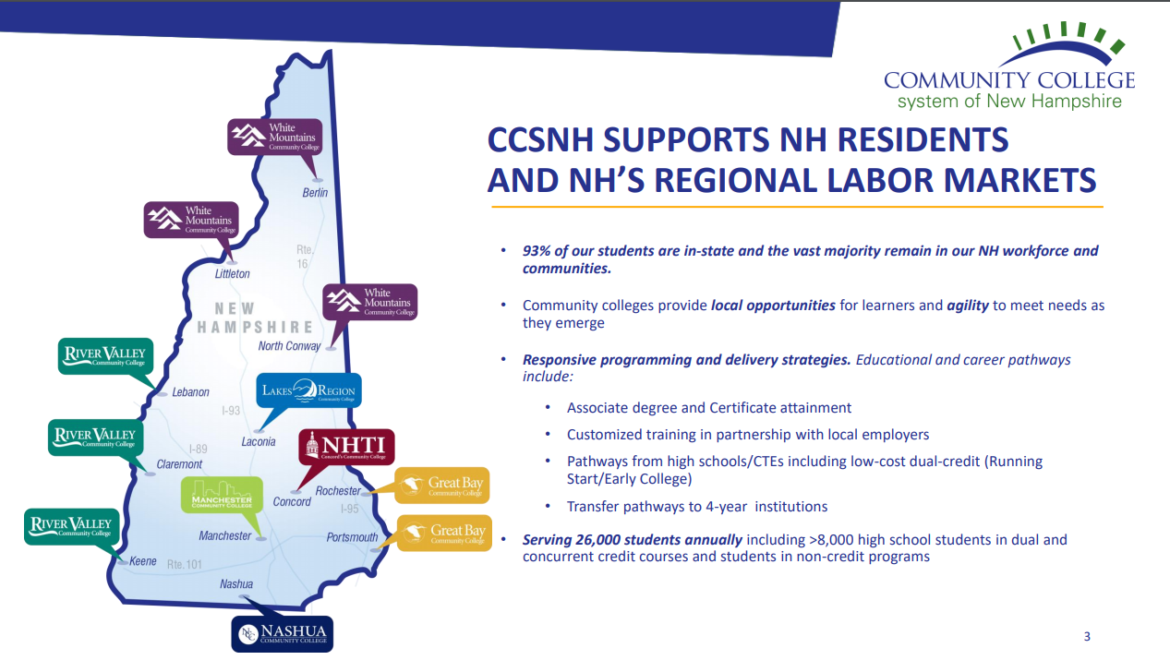 
Gov. Chris Sununu’s plan in his budget to consolidate the University System and the Community College System is supported by one body, but not the other.

The Senate Finance Committee heard both sides on Tuesday afternoon, including new details about an alternative model presented by the Community College System.

Catherine Provencher, chief administrative officer of the University System of New Hampshire, said a merger would be a tool to address the changes and future headwinds coming in to play with fewer students expected in the pipeline and the need to keep tuition manageable.

The state planning office estimates that the number of 15- to 19-year-olds in the state in five years will be 5,000 fewer and that students will likely be more financially needy. She said USNH is not asking for an increase in either tuition or state funding for the next biennium, but it is looking to pare its costs.

To deal with a $70 million cost restructuring that looks to future challenges, she said a record of almost 500 employees have taken early retirement or voluntary separation.

“It’s absolutely unprecedented,” Provencher said of so many deciding to leave. Still, enrollment for next fall looks to be holding steady.

Provencher said the merger could help “bring costs down” particularly in administration are “necessary.”

She said it would be another tool in the toolbox to address changes.

Dr. Susan Huard, chancellor of the Community College System of New Hampshire, called her system a bit different than USNH with different needs.

Huard said they, too, will see a decline in students with fewer in the pipeline but it is not likely to impact the Community College System as much.

For the first time in the merger discussions, Huard detailed an alternative model, including the following:

“Some states, including Maine, established an ongoing Higher Education Coordinating Council for the public systems. Such an entity comprised of leaders of both systems could be accountable for:

2. Developing operating and capital budget requests that are complementary, not competitive

3. Deepening present work on synergies such as procurement, contracts, IT, real estate etc.

4. Coordinating in other areas of planning and service, such as state business attraction efforts 5. Reporting regularly to the Public Higher Education Study Committee established in RSA 187-A:28-a, and to the Governor. In a state with similar demographic trends, this approach honors the systems’ differing missions, student needs, local impacts, and operating structures while creating a formal vehicle for accountability and collaboration.”

There are about 26,000 mostly New Hampshire residents who attend seven community colleges in 12 locations (including one in each county), which offer more certificates and short-term training programs and allow for people to begin to get college credits, many while they are working. Some can use it as a less expensive stepping school to a four-year degree because the credits are largely transferable.

Huard said the system has good enrollment rates and is “agile,” putting up new programs and taking down ones that are  not in demand fairly quickly to meet community needs.

“Our position and our board’s position is different,” than USNH “and there are many questions before we go down that path,” Huard said of the merger.

She said it would be best to work together as partners. She said the Community College System works to give its students, many of modest means, a “top benefit on every dollar they invest in us,” and noted it is level-funding tuition for the next biennium.

At least 78 percent of those students stay in New Hampshire to work and going to the community college creates upward mobility to better-paying jobs and transferability of credits, she said.