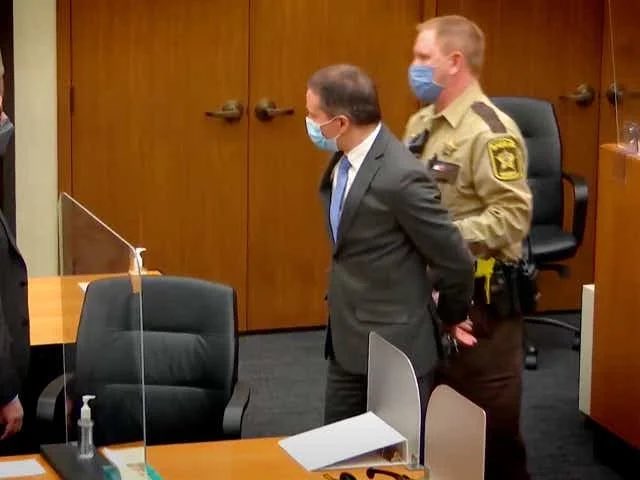 Ex-police officer Derek Chauvin being led away in handcuffs after being convicted of murdering George Floyd in Minneapolis.

New Hampshire’s reaction to the guilty verdicts for ex-police officer Derek Chauvin in the murder of George Floyd in Minneapolis was almost as fast on social media and via public statements as the single day it took for 12 jurors to convict him.

Some people in New Hampshire called for immediate police reform, chiding people such as Gov. Chris Sununu who insist there is no such thing as systemic racism here.

Others demanded lawmakers and political leaders pass legislation that will improve the criminal justice system for all. And others sent heart-felt messages to George Floyd’s loved ones.

Clifton West Jr., of Barrington, founder of the Seacoast chapter of Black Lives Matter, tweeted about the meaning of Chauvin’s convictions.

“This is not justice, only accountability,” West said.

BLM Seacoast posted about watching with the world and celebrating when Chauvin was led from the courtroom in handcuffs heading straight to jail to await his sentencing on three counts – second-degree murder, third-degree murder and second-degree manslaughter.

The jury of 12 people included six White, four Black and two multiracial people all of whom watched the video in court of Floyd gasping for air and dying while Chauvin kneeled on his neck for more than nine minutes on May 25, 2020.

Ronelle Tshiela, co-founder of the Manchester chapter of Black Lives Matter tweeted: “I will always remember where I was when I heard this verdict.”

Gov. Chris Sununu released a statement: “Based on the overwhelming evidence, I supported charges being brought against Derek Chauvin from the beginning and I am glad justice has prevailed.

“George Floyd should be alive today, and while he will sadly never be able to return to his friends and family, we can appreciate that justice through our legal system has been delivered. I join the people of New Hampshire in praying for George Floyd and his family and hope we can heal as a nation,” Sununu said.

Several people on social media suggested that Sununu should make sure he vetoes HB 544 should it get to his desk. The bill would prohibit teaching “divisive concepts” about racism and sexism.

Activist Carla Gericke responded to Sununu’s thread on Twitter: “So you’ll release the Laurie List so we can clean house here in NH, right?”

“Today’s verdict is a step forward for black, brown and marginalized people across this country and for accountability that leads to justice in policing.  We thank the jurors for their steadfastness and determination to see this through to the end.

“Here in New Hampshire, just a day after Governor Sununu wrongly proclaimed that systemic racism does not exist, we know that we have much work to do to reduce the inequities in our criminal justice system that disproportionally target, imprison, and kill people of color,” Harriott-Gathright said.

U.S. Congressman Chris Pappas, D-NH, echoed what many said, that George Floyd should be alive today.

“This verdict is an essential step, and while it won’t bring him back I hope it brings a sense of justice and peace to his family,” Pappas said.

“This has been the experience for too many in our communities of color. It has to stop,” Shaheen said.

“Many in New Hampshire believe that racism does not exist here…We as criminal defense lawyers see this every day. It remains incumbent upon us to strive for a fair criminal justice system free of implicit bias and systemic racism,” Melone said.

NHACDL called on leaders and lawmakers to take action immediately. These are some of NHACDL’s recommendations:

– Demilitarize policing. Police officers are not warriors; they should be guardians.
– Enact House Bill 1217 and Senate Bill 470, which require law enforcement officers to report misconduct of other officers. These reports must include use of racial slurs.
– Advance legislation requiring all law enforcement officers from every agency to wear body cameras.
– Ban the use of knee holds or choke holds as an acceptable police tactic.
– End no knock warrants and raids.
– Make the Exculpatory Evidence Schedule public.
– Mandate all law enforcement agencies keep statistics on race, ethnicity and gender of every encounter (including drivers and passengers in all motor vehicle stops) regardless of whether the person is arrested or otherwise detained.