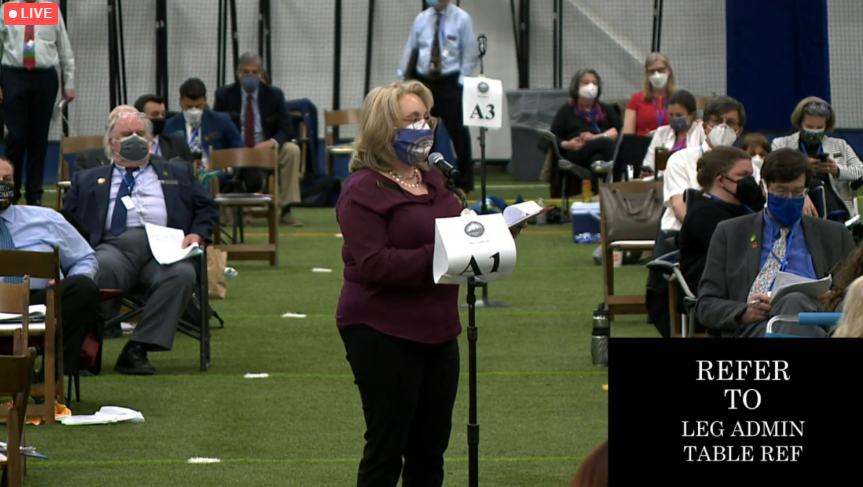 The House also beat back an attempt by Rep. Debra Altschiller to send six of its Republican members before the House Administration Committee after they signed a petition to terminate New Hampshire’s statehood and sought to declare the 2020 election void because of alleged fraud.

Before the House adjourned about 6:45 p.m. ending its work on its own bills, members overturned three key committee recommendations, approving a two-mile landfill-free zone around state parks and mandatory rear-facing car seats for children until two years old, and killing a bill that would have ended qualified immunity for police officers and other government employees.

The House also beat back an attempt to send six of its Republican members before the House Administration Committee after they signed a petition to terminate New Hampshire’s statehood and sought to declare the 2020 election void because of alleged fraud.

“It is our duty to protect and defend the constitution,” Altschiller said, noting the six signed a declaration of termination of the state and sought to write their own constitution.

But Rep. Al Baldasaro, R-Londonderry, sought to stop her motion and said “we should move on instead of these attacks on Republicans.”

Rep. Daryl Abbas, R-Salem, said if the issue was so important it should have been brought up earlier and moved to table her motion, which was approved on a 190-160 vote.

Adding to the acrimony was the killing of 73 bills because they were not acted on by the deadline.

“In the decades that I have served in the House, I don’t remember ever seeing such broad and aggressive moves by the Majority to rig our sessions to kill so many bills without discussion, debate, or votes,” said Deputy Minority Leader David Cote, D-Nashua. “Last term when we had lots of bills and were pushed up to a deadline, the Democratic Majority showed leadership and a commitment to the institution by staying until 4 in the morning to finish the people’s business. This Majority showed that they have no interest in transparency or the legitimate functioning of this body.”

The House overturned its Environment and Agriculture Committee, which sought to kill a bill that would have prohibited a landfill within two miles of a state park.

The bill is aimed at a proposed landfill in Dalton next to Forest Lake State Park by Vermont-based Casella, which also operates a landfill in Bethlehem.

The proposal has drawn opposition from many North Country residents and businesses claiming it will hurt the region’s tourist-based economy.

At Friday’s House session, Rep. Andrew Bouldin, D-Manchester, argued the House should overturn the committee’s recommendation saying it will harm the North Country economy and way of life.

“This policy is not ground-breaking, as many states have realized the severe detrimental effects landfills can have like diminished public enjoyment, cancer-causing risk to visitors, harmful effects to wildlife, failures of water systems, and increased vehicular traffic from hundreds of tractor trailers filled to the brim with garbage,” he said.

Bouldin noted his father used to take him to Pawtuckaway State Park when he is a kid and now he is taking his child to the park.

“You know what has changed in the 30 years since my dad took me there?” he asked “Nothing, absolutely nothing.”
Park land is what protects the natural resources, he said.

“There are two types of landfills, those that leak and those that will leak,” Bouldin said. “It is not a question of if this park will be negatively affected by the landfill, it is a question of when.”

Those who supported killing the bill said what is being proposed is spot zoning done by the state legislature and could affect other industries like dairy farming.

Rep. Kevin Verville, R-Deerfield, noted this is the second attempt to shut down the landfill project.

While some have raised the concern that out-of-state trash will be dumped in the landfill, he noted federal law protects interstate commerce.

“We do not want to start a trash war. Most of our hazmat material goes to high-temperature disposal sites out-of-state,” Verville said. “If we can no longer export to those facilities we will be caught as a state in quite a bind.”

The bill passed on a 197-159 vote after several attempts to stall action on the bill until later, which would have effectively killed the bill.

The House spent nearly an hour debating whether to require parents put their child under two years old in a rear-facing car seat.

After numerous attempts to put off debate on the bill, it passed on a 199-176 vote.

Opponents said the state should not be mandating the car seats and it should be the parents’ responsibility to protect their child.

And they said it could cause some families to spend money they do not have in order to meet the law having to buy new car seats or even vehicles.

But supporters said pediatricians and other health professions believe the bill would help save lives and protect the development of small children.

The bill would protect the state’s most vulnerable citizens, they said.

A bill that would have eliminated qualified immunity for police and other governmental employees had strong support from the House Judiciary Committee with a 19-2 recommendation to pass, but recently drew opposition from many fronts such as police chiefs, city mayors and the NH Municipal Association.

Qualified immunity prevents someone from filing a lawsuit against a government employee or entity if the person is acting in good faith and believes he or she followed the law.

Rep. Paul Berch, D-Westmoreland, said the practice has been abused and courts have given it far greater reach than intended.

He said the bill would return to the pre-1982 practice of not having qualified immunity, an era without the string of frivolous and costly lawsuits opponents say will happen.

“This is a victims’ rights bill. This is a government accountability bill,” Berch said. “This bill says every citizen of our state has a right to go to the state for redress for the harm done to them.”

The prime sponsor of the bill, Rep. Tony Lekas, R-Hudson, said the constitution is there to protect citizens, but how can citizens be protected if there is no remedy if their rights are violated,

But opponents of the bill, which would not hold bad acting employees financially accountable, but would their public employers, said it would open the door to costly lawsuits, increase legal fees and insurance premiums and ultimately property taxes.

Former Supreme Court Chief Justice and now Rep. Bob Lynn, R-Windham, said qualified immunity was instigated so police and others were not watching over their shoulders all the time because they might be sued.

He said some courts around the country have treated qualified immunity much more broadly than it should be.

“That problem can be corrected,” he said, without eliminating qualified immunity altogether.”

But Berch and others said “bad actors” should not be able to hide behind the shield of qualified immunity if they are doing harm to people.

The House decided it should have final say over any increase in the electric systems benefit charge. Currently the charge is set by the Public Utilities Commission after electric companies present energy efficiency programs every three years.

The bill would also require all future spending go to projects providing energy efficiencies savings for all consumers and not projects like insulating homes.

The House voted not to allow the state to join a regional low-carbon fuel program that opponents called a gag rule on carbon reduction programs.

But proponents said the program would raise costs on low-income people and commuters and the governor has already said the state is not going to join the program.

House Bill 440, prohibiting the suspension of civil liberties during a state of emergency, passed by a vote of 192 to 178.

Rep. Cam Kenney, D-Durham, spoke against it saying when it was first introduced it had to do with religious liberty during a state of emergency.

“Wearing a mask and enforcing social distancing are inconvenient. I do not deny that, but that does not mean they are unconstitutional,” Kenney said.

And he said he waits tables for a living and wearing the mask can be inconvenient.

“I still wear it…I do want to stop the spread of this disease. I do want to get out of this pandemic,” Kenney said.

Rep. Jim Kofalt, R-Wilton, spoke in favor of the bill.  “HB 440 simply clarifies the intent of our state’s emergency statute by specifying that a New Hampshire Governor may not suspend or limit Constitutional rights during a state of emergency. This is not aimed at reversing any specific orders issued by Governor Sununu. It’s not an anti-mask bill, for example, and it doesn’t prevent the Governor from declaring or extending a state of emergency. Rather, it simply brings New Hampshire into the company of other states such as Maine which recognize and affirm the importance of our Constitutional rights,” he said.

“More of our firefighters are retiring later. Whether a firefighter retires young or later in life should not determine their eligibility for this coverage. I’m proud the legislature stood up to support firefighters across New Hampshire,” Soucy said.

Rep. Stephen Boyd, R-Hooksett, spoke against it saying any future extension will “put taxpayers on the hook” even when a direct causal link cannot be proven.

Rep. Tim Horrigan, D-Durham, spoke against HB 566 saying it would make it impossible for a public body to debate the merits of a motion to unseal meeting minutes without disclosing the information in question.

But Rep. Joe Alexander, R-Goffstown, said the bill as amended would involve sealed or nonpublic meeting minutes regarding the acquisition of property.

Once the acquisition of the property either went through or failed to go through, those meeting minutes would automatically be open to public view “because the committee found no justification for keeping those minutes from the public after the deal has been completed or fallen through.”

The House voted in favor of the committee report recommendation of ought to pass by a vote of 201 to 178.

The darkness of the tinting would be the same as the national standard for new vehicles.

Opponents said the prohibition was maintained for years out of safety for police officers, but supporters said it would allow New Hampshire drivers to have the same tinted windows as out-of-state drivers.

Nancy West contributed to this article.