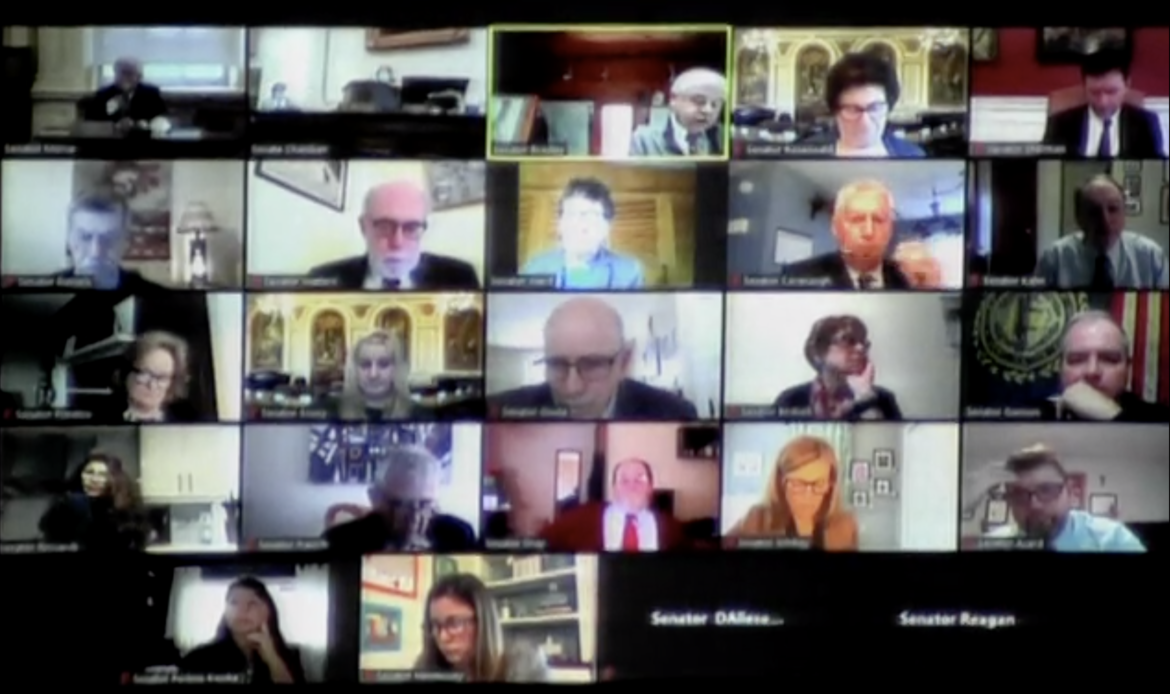 A screenshot from the March 18, 2021 remote Senate session.

CONCORD —- Down party lines, the Senate approved an expansive school voucher bill Thursday that would allow parents to use state education aid for a wide range of alternative educational opportunities for their children. The bill was then immediately tabled on another 14-10 party line vote – a move that enables the body to consider bills with a fiscal impact during the budget process.

Opponents have called Senate Bill 130 the most expansive voucher bill in the country with little accountability and say it would increase local property taxes, not reduce them as supporters claim.

They said the bill is the latest attempt to privatize education at the expense of the children remaining in the public school system.

Supporters said the bill seeks to help those students left behind and those who do not perform well in the public education setting.

They said the program would not only help students it would save state taxpayers hundreds of millions of dollars.

Sen. Bob Giuda, R-Warren, said the current situation in public education is like rearranging the deckchairs on the Titanic.

“The opposition centers on the preservation of an institution even if it is at the expense of the children who attend,” Giuda said. “This bill attempts to care for the children whom our schools don’t work for.”

He said the top reason parents apply to the current business tax credit school scholarship fund are for bullying and discrimination.

Under the bill, a parent seeking to establish an account would receive between $4,500 to $8,500 per pupil to spend on tuition to any private, religious, or alternative school and on other related educational costs including home schooling, computers, books etc.

The program is open to the parents of a student in public —traditional and charter — private or religious school, home schooling, or other alternative educational programs.

Democrats argued there are too many unanswered questions and while it aims to help lower to middle-income families, private schools will still remain out of reach because of their costs even with the state aid.

Sen. Jay Kahn, D-Keene, argued the state’s exposure would be far greater than supporters say, and would allow parents of students in private schools apply for state aid at a time when the Department of Education wants to double the number of students in charter schools.

“That is a lot of competition over a relatively small amount of money for public schools,” Kahn said, “and that makes the public extremely nervous about property tax increases from this bill.”

Others argued that a public education is essential for democracy.

Sen. David Watters, D-Dover, said the Senate is debating the civic life of the Republic.

“We should endeavor to improve public education for all students. The truth of the matter, much like a public utility, the public school beacon must shine,” said Watters. “A vote for this bill is a vote against the public good. I will stand with all our children and vote for public education.”

But others argued the bill is needed in order to help children.

The bill’s prime sponsor, Senate Majority Leader Jeb Bradley, R-Wolfeboro, said the focus has to be on the students.

“This is about how we treasure kids and that all kids in New Hampshire are afforded an opportunity is why we want to see this move forward,” Bradley said. “The public schools do a great job for the vast majority of students in New Hampshire, but that does not happen for every kid.”

He said the arguments against the bill are the same ones raised over the years on charter schools and homeschooling, that they would devastate public education, but that has not happened.

On Thursday the Senate also rejected the findings of the Education Funding Commission, nearly on party lines, with opponents arguing the change in funding formula would rely on a divisive statewide property tax while supporters say it addresses the inherent inequities in the current system.

Senate Bill 158 included the Commission’s findings and recommended a statewide property tax to help the state’s property poor districts whose students’ outcomes fall below those from property wealthy districts, which raise more money for education.

The bill would provide each district the resources to be able to provide their students the opportunity to reach the state average outcomes, Kahn said.

Kahn, who was a member of the Commission said the Commission found what should not be a surprise, that wealthy districts with more money to spend on education produce students with higher educational outcomes than property poor districts that struggle to provide educational opportunities for their students.

He said the bill does not provide all the answers and the Senate Education Committee should be able to continue to fine tune the bill, noting a small change in the current statewide property tax can provide significant help to poorer communities.

He said the House has a bill to dissolve the Commission and a vote to kill the bill is an attempt to put the Commission’s work behind the Legislature.

Kahn noted the state Supreme Court has yet to rule on the ConVal school district lawsuit and noted, “The court case is going to come back and the court is going to say the legislature needs to work on this.”

He said the bill would provide a vehicle for lawmakers to address the issue.

“It does not make sense to disregard the good work and waste $500,000,” she said. “We can and we should get his work done. Public education is the great equalizer.”

But Bradley said the Legislature has “been here and done that,” and the statewide property tax is the most divisive tax the state has had.

“When a Commission we authorized last session comes back with something rejected so unanimously, you need to start from scratch,” Bradley said. “There would be about $1 billion in tax shifting from some communities to others.”

The Senate voted 15-9 to kill the bill; Sen. Tom Sherman, D-Rye, joined the Republicans in voting for the “Inexpedient to Legislate” motion.

The Senate voted down party lines to re-refer Senate Bill 145, which would have provided $36 million in disparity aid to help the 80 school districts with the lowest property values in the state.

Kahn said the bill would send the message the state wants to help the most needy districts in the state, but others said the issue will remain alive and will be considered when the Senate begins work on the budget after the House acts on its version next month.