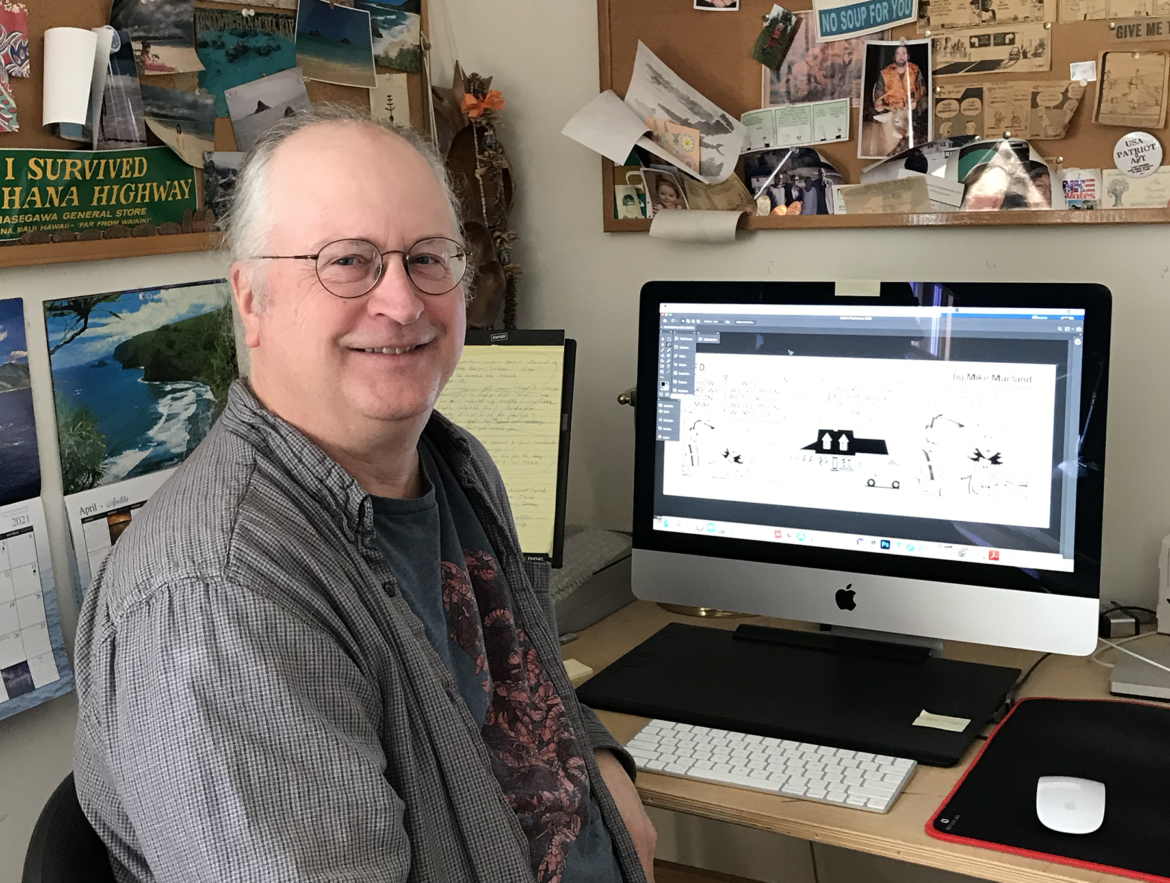 Editor’s note: This story was co-published by the New Hampshire Business Review and InDepthNH.org

Mike Marland’s career has spanned more than four decades, during which he’s earned notoriety in New Hampshire state politics and culture for his ability to synthesize complex issues into simple, easily understood illustrations.

While the verbiage in his editorial cartoons may have been brief, the fond remembrances of his work by colleagues, fellow cartoonists, and the subjects of his caricatures are not.

After being let go from The Concord Monitor for cost-cutting measures in 2017, Marland found a home for his editorial cartoons at InDepthNH.org, however, he recently announced he would cease that work, for the most part, while he retains the right to post from time to time.

“I’ve reached a point where I don’t really have much to say that’s new or original,” Marland wrote recently of his retirement. “I’m finding it harder to come up with a fresh take on New Hampshire’s unfair tax system for the umpteenth time…or the latest crop of pompous gun nuts.”

What will he do next? Aside from continued work on two comic strips, RFD and Snuffy Smith, Marland says he’d like to tackle the filing boxes upon filing boxes he has of original editorial cartoons, upwards of five or six thousand. He’s contemplated scanning them all or downsizing and putting things up for auction on eBay.

“I was always afraid if I met these people, I would like them. Or I wouldn’t want to be so critical. It was neutrality,” Marland maintains.

Marland is a proud New Hampshire native who grew up in Lyman and attended Lisbon High School – one of the lawsuit schools, he’s quick to point out. A fan of Mad Magazine, and inspired by cartoonists like Herblock and Jeff McNally, he started doodling in high school and hasn’t stopped since. After dropping out of college, his first “break” came in the late eighties, as a young professional working at a printing company in Littleton that handled the local paper, the Littleton Courier, which picked up his cartoons that focused on local issues.

In the early 1990s, Mike brought his work to the Concord Monitor where John Fensterwald accepted the cartoons. In that decade, he accrued work with eleven New Hampshire newspapers, which included individual editorial cartoons and a regular comic strip at The Union Leader – RFD – a rural humor comic strip that would later become syndicated and is still in production to this day, although Marland says he’s running out of fresh fodder there, too.

“For the Monitor to have had an editorial cartoonist for so long – almost thirty years – it was rare. It’s not the sort of thing most local papers had or could afford. As a result, he was sort of the personality of the paper for all those years,” says Felice Belman, a former Concord Monitor editor who now works as assistant national editor at the New York Times.

Belman has a self-published copy of Marland’s cartoons that reads like a history book, she says, because there are cartoons about the first Sununu administration, and the Gregg administration, and Steve Merrill, and issues that “you wouldn’t otherwise remember but were giant at the time.”

“He’s an institution in the state,” says Mike Pride, former long-time Concord Monitor editor. “I love the caricatures that he did of people in power; he just had a way of portraying them that were so true to who they were and what they look like.”

Marek Bennett, a cartoonist and graphic novelist who grew up in Henniker, New Hampshire, remembers reading Marland’s work in his grandparents’ newspapers as a child.

“Mike’s work was always an inspiration to me because you could look in the paper every day and there’s this new idea that somebody a few towns over has carefully thought out and worked on to the page for you to read,” Bennett says. “The superpower of comics, or in Mike’s case the superpower of the image, ideally, an editorial cartoonist is taking complex ideas and boiling them down to an image that when you look at it, you get it – without thinking – for better or worse. Even though I didn’t meet him until years later, I always felt a real sense of connection to that hand drawn piece of the newspaper.”

Political cartoons are as old as the origins of our country’s newspaper industry in Massachusetts and Philadelphia. Benjamin Franklin is known for many things, including authoring the first political cartoon in 1754 – “Join or Die” – a segmented snake representing the colonies that urged a united front at the start of the French and Indian War.

From their early origins as wood cuts, to newspaper illustrations, and now digital renditions, editorial cartoons have always been an effective check and balance on our democracy in terms of public discourse, says Harry Katz, author and former curator of The Herb Block Foundation.

The newspaper industry – and news consumption – has changed remarkably in Marland’s 43 years in the business. When he started, there were three editorial cartoonists working in New Hampshire; he was the last one to his knowledge. Before the last recession, Marland says there were 250 editorial cartoonists working at newspapers across the country; now there’s less than fifty. Local newspaper subscriptions have dwindled, media has moved online, and social media – and memes – abound.

Tom Haines, Director of the Journalism Program at the University of New Hampshire, says, “It used to be that the editorial cartoonists were one of the few people in a city that had that forum, that megaphone, and now they’re competing with memes and every little TikTok. You can say that’s good if it gives voice to more people, but it also diminishes the heft of an editorial cartoonist.”

“Mike has shown remarkable resilience. Newspapers are dwindling. With the advent of the internet, cartoonists have moved into the field of syndication and it’s a great loss to the newsrooms because so many of these cartoonists are as much journalists as cartoonists. You lose the local issues that are so critical to defining the future for communities,” says Katz.

More succinctly, Marland says the Internet has killed the art of editorial cartoons.

While beloved by colleagues and readers, Marland’s 43 years have not been without controversy. He – and those close to him – all remember the kerfuffle caused by one cartoon in particular.

Five months after 9/11, The Monitor published a Marland cartoon depicting President George W. Bush flying a plane into the twin towers, labeled “Social Security” and “Medicare.” The image caused an uproar – from readers, national media outlets, and even the White House.

The Monitor servers crashed. The phone lines were jammed. Marland wrote an apology. Editor Mike Pride wrote a column saying they shouldn’t have run the cartoon.

“I got pissed off and ripped it up. I threw it away,” Marland says. “Then everybody started really hammering on the whole thing about “Oh, you shouldn’t draw stuff like that.” And I was like, “No, I can draw whatever the hell I want.” So I took a photocopy of it. And I put on a light table and I redrew it. I still have that second version.”

Marland was fond of drawing Judd Gregg as Frankenstein but hit a nerve when he drew the anti-choice governor with a coat hanger coming out his ears.

“Judd hit the roof and didn’t come into the newspaper for an editorial board or anything for years and years,” Jimenez recalls.

In more recent history, Marland drew former Speaker of the House Bill O’Brien with what Jimenez refers to diplomatically as a “Charlie Chaplin mustache” but was in actuality a Hitler mustache, in reference to the late Representative Steve Vaillancourt’s cry of “Sieg Heil” during a particularly heated House session. O’Brien was furious.

“In response, I asked Mike to draw a cartoon of O’Brien every day the next week with a different mustache. O’Brien as Yosemite Sam – it was just a work of art. It was brilliant, to the point where O’Brien collected ‘em,” Jimenez says.

“I can’t tell you how many times I would get calls from politicians or their assistants, first pretending that they were angry at some cartoon that really skewered them, and then they would ask for a special copy or a free version to give as a gag gift,” adds Belman.

Howard Altschiller, Executive Editor of Seacoast Media Group which ran Marland cartoons in the past, extrapolates, “There is nothing to get people riled up like an editorial cartoon, and Mike’s were no exception. He was stirring up good trouble, as John Lewis would say. I was visiting with Doug Scamman and there was a Mike Marland cartoon framed on his wall. He had his fans from both sides of the aisles, and I’m sure he had his detractors too.”

Not only does former Speaker Doug Scamman, a Stratham Republican, have a Marland cartoon on his wall – he has three. Scamman says his wife, Stella, hung them up.

“I see them all the time. They give you fond memories,” Scamman says.

Another politician who held on to his caricature is the Dean of the Senate, Manchester Democrat Lou D’Allesandro, whose State House office is adorned with a collection of photographs and political cartoons. D’Allesandro believes editorial cartoons contribute significantly to political discourse and notes the importance of tone.

“The stuff done by The Union Leader was vicious, particularly the one where they decapitated me. Marland’s cartoons have a little levity associated with them, like the one of me rolling the gambling die up the hill, knowing that it’s going to come back down,” D’Allesandro says of Marland’s caricature of him as Sisyphus.

InDepthNH.org’s executive editor Nancy West said it was a delight to post Marland’s editorial cartoons and hopes he gets inspired – or pissed off – often enough to keep contributing, at least once in a while.

“I’ve known Mike Marland since we both started out at The Littleton Courier,” West said. “It’s been a real joy to watch his talent blossom. Showcasing Mike’s work during these last few years has meant a great deal to all of us at InDepthNH.org. We miss Mike already.”

Jeff Feingold, editor of the New Hampshire Business Review, is also a fan.

“Mike is literally one of a kind in New Hampshire. In all my years as a journalist here, no one has been able to do the things he has in the way he has. Mike is fearless and funny and can draw with the best of them — the most important attributes of any great cartoonist.”

For many, Marland’s cartoons serve as a reminder that it’s important to poke fun at yourselves amid increasingly polarized politics at the state and national level.

“It’s important to take a deep breath once in a while. Mike Marland is somebody who reminded us about that,” explains Belman. “There’s an absurdity to American politics and New Hampshire politics in general, as well as town meetings and blackflies and the Red Sox and all the other stuff he covered. He made you laugh, once a day at least.”