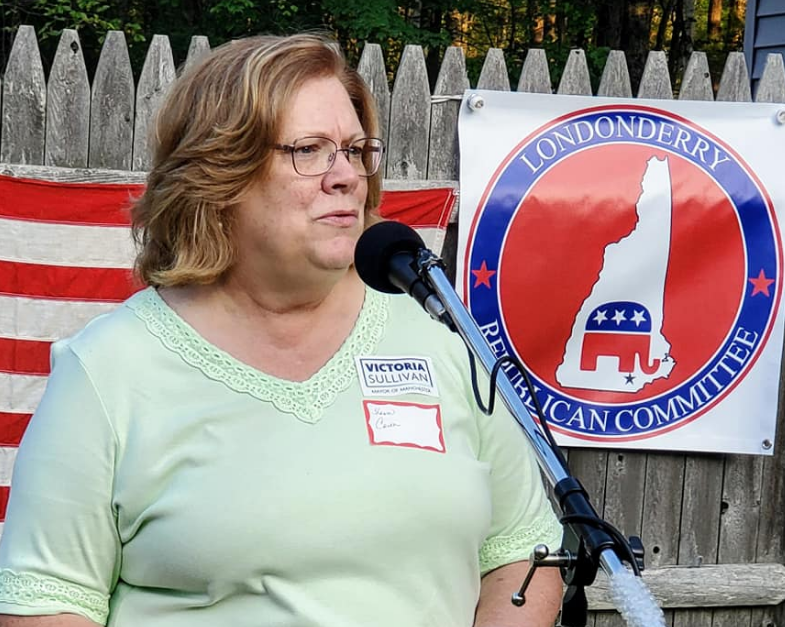 State Sen. Sharon Carson, R-Londonderry, is pictured at an event in 2019. She chairs the Senate Judiciary Committee.

One bill would exempt records in personnel files, internal investigations and pre-employment background investigations of state and local law enforcement officers from any public disclosure including the state’s right-to-know law.

The sponsor of the bill, state Sen. Sharon Carson, R-Londonderry, said it would clarify what may and what may not be released from a police officer’s records.

She is the chair of the Senate Judiciary Committee which held the two public hearings remotely Tuesday.

But opponents of the bill, which outnumbered supporters two-to-one, said it would harm the state’s push for greater transparency and accountability for law enforcement after George Floyd was killed last year by a police officer in Minnesota.

“This would be a perfect avenue for bad cops to be protected,” said Ronelle Tshiela, founder of Black Lives Matter Manchester and a member of the governor’s Commission on Law Enforcement Accountability, Community and Transparency. “This bill is an enemy to both accountability and transparency.”

The bill could negate a recent state Supreme Court decision that the Laurie List for police officers with a history of dishonesty, excessive force or instability is a public document.

The final resolution of the case has yet to happen as negotiations and court hearings continue over releasing the list to determine if the officers have privacy rights.

Two other recent Supreme Court rulings would also be affected by the bill, which seeks to limit what is open to public disclosure for police. The rulings overturned a 25-year-old ruling prohibiting the release of almost all personnel records of public employees.

The new rulings require a balancing test between private information and the value of public disclosure.

The other bill would make police decertification hearings before the Police Standards and Training Council public but allow for portions of a hearing to be confidential.

The prime sponsor of Senate Bill 41, Sen. Harold French, R-Canterbury, said it would be similar to a court hearing. “This bill would bring light to areas in the past that have been a little dark,” French said.

No one spoke in opposition to the bill, while a number of people including news organizations supported it.

Senate Bill 39 would exempt police misconduct records and investigations under the right-to-know law.

“The rulings need some clarity,” Carson said. “There is some misunderstanding about what information we are talking about.”
She said she viewed the bill as a vehicle to bring all sides together and reach an understanding. She said the court rulings do not apply just to police, but to all public employees.

The bill was supported by the state association of police chiefs, state troopers and police as well as the New Hampshire Municipal Association and attorneys representing those organizations.

However, the bill was opposed by numerous press organizations, the American Civil Liberties Union-NH, advocates for police reform, criminal defense attorneys and several people who said they were victims of law enforcement secrecy.

Julian Jefferson, who was on the law enforcement commission and has been a public defender, said the proposal was a bill in search of a problem, when the court already set out the appropriate remedy.

“If this bill passes, it sends the message that secrecy rules the day,” Jefferson said, “and that’s a dangerous road to be going down.”

Several speakers said police have more protections than other public employees and the bill would give them even more.

A number of people opposing the bill said they do not seek personal information like medical records or a person’s address or next of kin.

Nancy West, founder of InDepthNH.org, the lead plaintiff in the case to release the Laurie list of police misconduct, said this is not a fishing expedition for personal information.

“No police officer has a right to secrecy if there is misconduct in their personnel file,” she said. “They should not be singled out for secrecy when they have the right to take away a person’s liberty, to arrest someone.”

The law enforcement commission was very clear in its recommendations, West said. “What’s needed is more transparency not more secrecy if people are going to trust the criminal justice system and police if they are stopped.”
Cordell Johnston of the New Hampshire Municipal Association backed the bill but said it is a little too broad.

“It is hard to take a position records related to the determination of misconduct should be exempt when a police officer or another (public) employee engaged in misconduct,” he said.

The problem is it falls to human resource directors, or town managers to determine what information is public and what is not.

They are the first line of the “balance test,” he said, and if they are wrong they will be challenged in court.

He said they could disagree where the line should be drawn but it would be helpful if it were in statute.

“The court system is a very inefficient way to draft legislation,” he said, “and a very expensive way and very time consuming.”

Broth said the court system has interceded twice in the right-to-know law, once saying almost all personnel records are exempt, and now saying the earlier ruling was wrong and now it should be a balancing test.

“It is for the legislature to decide what is and what is not for public disclosure,” Broth said. “It is important for the public to have information about misconduct not just for police officers but any public employees, but also to protect against unfounded allegations.”

Several representatives of law enforcement supported the bill saying it would protect the constitutional rights to privacy and protect against unfounded allegations.

Marc Beaudoin, a retired state police detective, who is on the board of the NH Troopers Association, said there is not a lot of secret information in the files covered by the bill.

The file is not released to the police officer once it is completed unless he appeals the disciplinary action, he said.

But Scott Traudt said the secrecy surrounding police misconduct cost him a year of his life claiming that a prosecutor lied about the reliability of two police officers who claimed he assaulted them.

Traudt, whose case is currently before the state Supreme Court said, SB 39 would continue the same process that shielded law enforcement misconduct in his case.

Traudt, of Strafford, Vt., was convicted of disorderly conduct and assaulting Lebanon police officer Phillip Roberts, who is now deputy chief, during an altercation Jan. 14, 2007.

An altercation ensued with Roberts and Richard Smolenski, who is lieutenant bureau commander of the detective division, the only officers on the scene. Traudt was found not guilty of assaulting Smolenski, but spent 364 days in state prison for the Roberts assault.

More recently, Smolenski and another officer have been placed on paid administrative leave and officials won’t say why.

Traudt said he has tried to clear his name and continues to do so, but more transparency is needed to protect others from what happened to him.

The Senate Judiciary Committee did not make a recommendation on either bill after five hours of hearings.