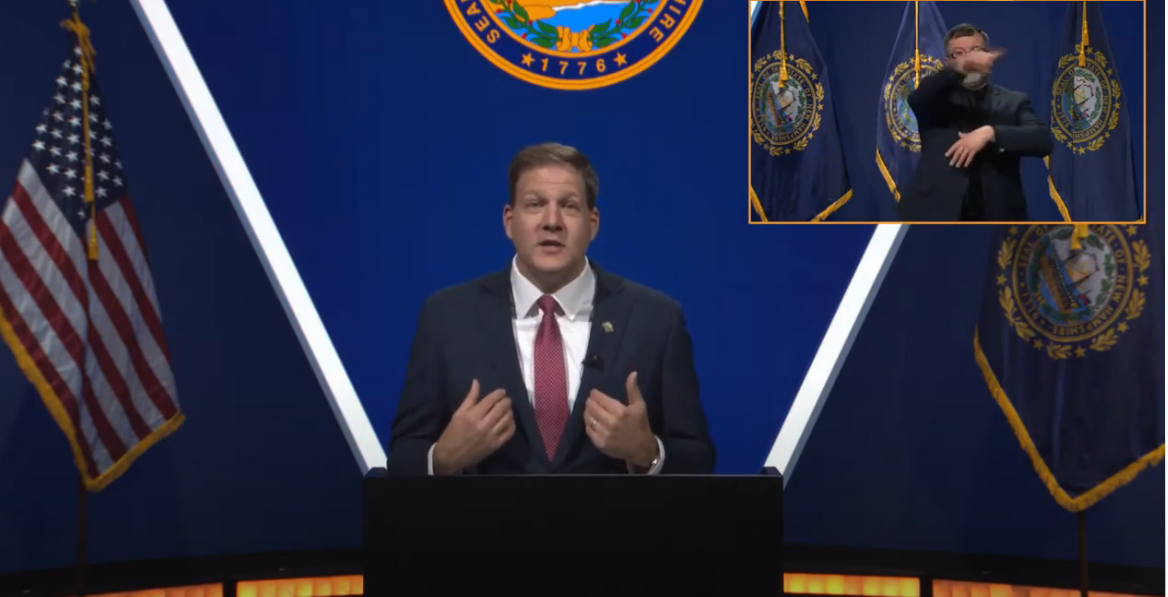 Gov. Chris Sununu is pictured in this screen shot from YouTube of his private inaugural address Jan. 7.

CONCORD – Gov. Chris Sununu’s first report this year of donations to his inaugural committee showed it received $62,500 from 12 contributors since he won in November and – including a surplus – still has $99,954 left to spend.

There will be no inauguration gala this year because of COVID-19. Sununu’s swearing-in and inaugural address Jan. 7 were both private because of security concerns. Beyond the people required to be there, Sununu has refused to tell InDepthNH.org who attended either event as “family and friends.” His spokesman did say they were not donors to the inaugural fund.

The law doesn’t specify how the inaugural committee’s money can be spent, but besides inauguration activities, Sununu, who declined comment for this story, has said he spends it on things related to running the office.

At a November press conference, Sununu said: “But instead of a single large gala event in January, we will be encouraging sponsorships and giving so we can host a series of free family outdoor events hopefully this summer, as we come out of COVID…

The three $10,000 donors to the inaugural committee in December 2020 included Anthem Inc. of Cincinnati, Ohio; H. Andy Crews, the owner of AutoFair in Manchester; and Peter Paul Wines of Petaluma, Calif.

Sununu was criticized after the previous election for expenditures to himself, family, and the inaugural committee’s treasurer, Paul Collins.  The legislature passed a bill that took effect Jan. 1 requiring expenditures totaling more than $1,000 from the inaugural treasurer to the governor-elect or his or her immediate family to contain back-up receipts. The law caps donations at $10,000.

The inaugural committee’s major expenditures in its Jan. 10 filing with the Secretary of State’s Office included three charities, books, holiday decorations, food and beverages and office incidentals. It showed a surplus from Sununu’s last inaugural campaign of $48,891 and $11,436 spent this filing period and a balance of $99,954.

The second biggest single expenditure was for $1,200 for books from Soleil’s Salt Cave, which offers holistic and alternative health services in Exeter, on Dec. 2, 2020.

The following show the contributors and expenditures for the Jan. 11 filing of Gov. Chris Sununu’s inaugural committee. These can also be found on the Secretary of State’s website along with past filings at: https://sos.nh.gov/elections/running-for-office/campaign-finance/governor-sununu-inaugural-committee/ .