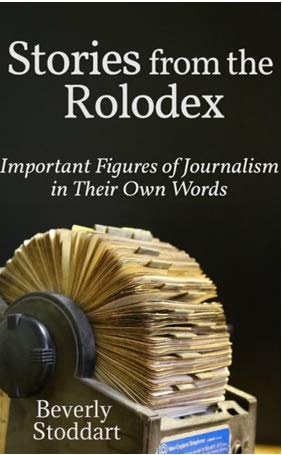 Stories from the Rolodex, Important Figures of Journalism In Their Own Words
By BEVERLY STODDART

Alright readers, I have a gem of a book for you.  If you are reading this, you already have an interest in news and how reporting works.  I want you to consider the word change and how it affects you and yours and our history.  Yes, Stories from the Rolodex, a book by Beverly Stoddart, gives us clues from the past and how the old Rolodex had been utilized by people who learned to report the news the old-fashioned way before the world of Google and computers.

Stoddart interviews people she found in the Rolodex she happened on when United Press International was shuttering its business in the space it rented at the Boston Herald minutes before midnight on December 3, 1982.

United Press International is a news service that at one point in its history had more than 6,000 media subscribers.  On that December night Stoddart stepped into the dying newsroom and noticed the battered old Rolodex.  It was huge, overflowing and stuffed full of names and numbers.  She asked what was going to happen to the old worn-out relic and was told it was going to be thrown out. She asked to take it home to New Hampshire instead where it then languished for 20 years.

The Rolodex was used in the days when UPI reporters on deadline banged on doors to find a telephone and then called their stories in to their editors dictating every detail.

You know the kind of telephones.  They had dials and multiple rings for some who had party lines.

Today everyone has a cell phone in their back pocket or purse.  Back in the day, investigative reporting at its finest utilized any phone the reporter could find.  Hundreds of numbers, stories and people were just waiting on the Rolodex for a chance to tell their stories.

One day Stoddart started to call the numbers she found and let us all in on the “howdunit”  of reporting in the past.  This book chronicles some of the finest hours of reporting by journalists whose bylines you may not remember and provides a really in-depth view of journalism in the past as well as how we get our news today.

Boston, Cape Cod, Manchester, Concord, New York and many more places in the United States and around the world are connected to the stories in this book.

“The linchpin in Stories from the Rolodex was the Baby Fiske card,” Stoddart wrote on her blog. “It had a phone number and two words: liver transplant. The story of Baby Fiske took place when there was no such thing as a transplant database. It’s truly a heroic tale of doing whatever a parent must do to save a daughter from certain death.”

Stoddart tempts us to pick a card from the Rolodex.

“It will lead you to the Golden Dome for a drink or the No Name Restaurant for chowder. You could reach Red Auerbach at home. You can see where Henry Kissinger’s wife lived or discover Gloria’s Cash and Carry had luscious subs,” she wrote.

What an amazing fun read learning the delicious details that people share with Stoddart about their lives and careers.  Stories from the Rolodex is well-written and made me smile, cry, scream and feel so good about the resilience of the individuals walking around us.

Beverly Stoddart, thank you so much for your interesting and compelling walk through time, places and people’s lives.  You can get this book through Amazon.

Biography: Beverly Stoddart is an author, writer, and speaker. She has published her essays in NH’s largest newspaper, the Union Leader, and the Senior Beacon, and has a monthly column in the Windham Independent. Stoddart worked for newspapers for over 40 years, including at the Boston Herald and the Union Leader. Her new work is Stories from the Rolodex and tells how United Press International journalists worked in the 1960s, 1970s, and 1980s. It is available in December 2020. She and her husband own Effective Fitness, a personal training fitness facility in Londonderry, NH.