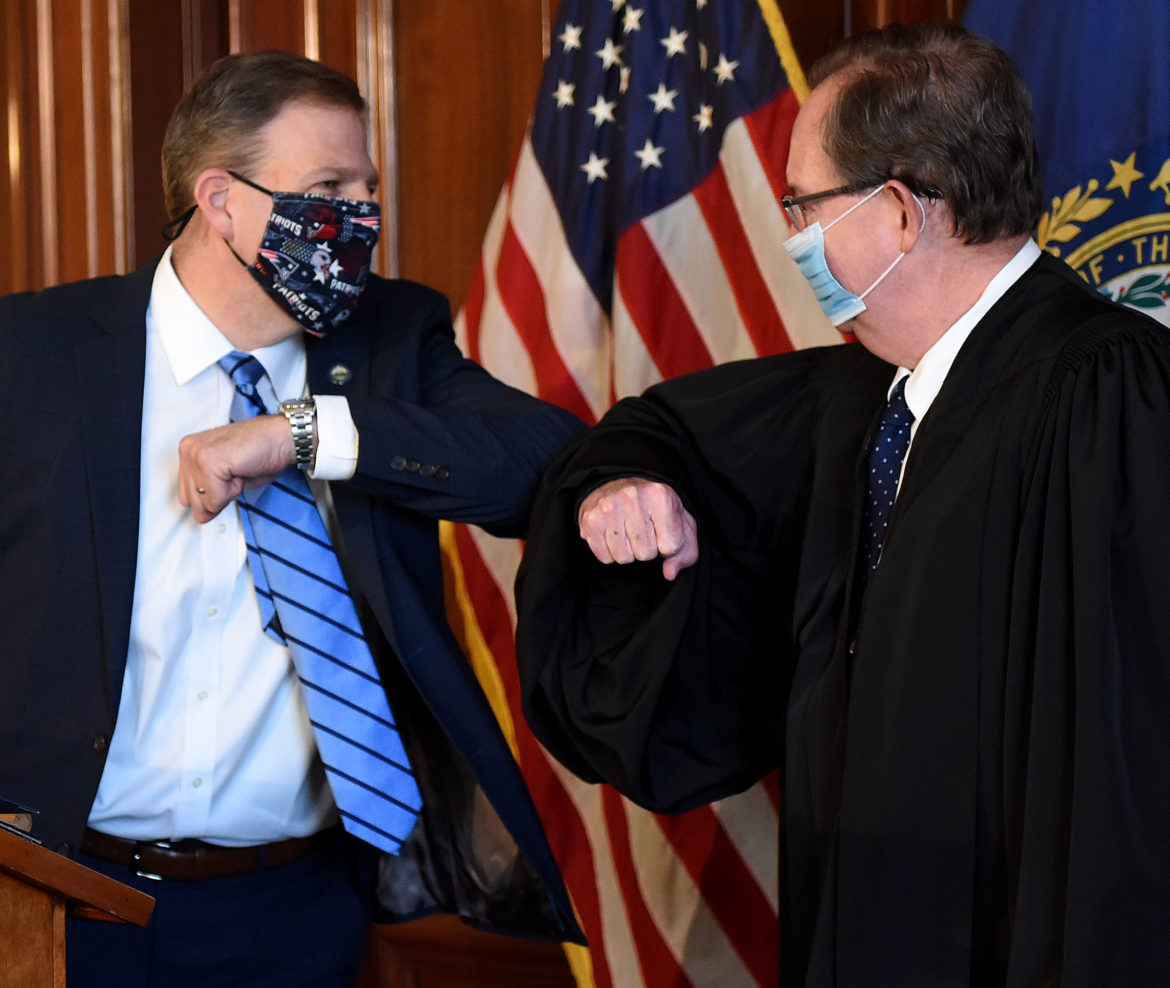 CONCORD – Supreme Court Senior Associate Justice Gary Hicks swore in Republican Gov. Chris Sununu to his third term Thursday at noon in what Sununu described as likely the shortest inauguration ceremony in state history. It was just under 15 minutes in the Executive Council Chambers at the State House.

“We are here under very unusual circumstances,” Sununu told the small gathering citing safety concerns that came up in the last month with protesters picketing his home in Newfields, culminating in what he called “the tragedy we saw yesterday in Washington.”

Sununu did not elaborate and will give his full inaugural address tonight (Thursday) at 7 p.m., again not open to members of the public and press.

Mask-less protestors who oppose Sununu’s statewide mask ordinance and what they call his unconstitutional emergency orders to curb the spread of COVID-19 gathered outside the State House during the ceremony. Crowd estimates ranged from 100 to 200 people protesting.

Protester Carla Gericke, former state Senate candidate, said: “I was there because I really am concerned about our loss of liberties. I’d like to see people unite over the concept of self-ownership.”

The five Executive Councilors were also sworn in, with Ted Gatsas, R-Manchester, attending by telephone.

As to who attended the noon ceremony, Sununu’s spokesman Ben Vihstadt said they included Pastor Michael Worsley, who gave the invocation, Executive Councilors David Wheeler, Joe Kenney, Cinde Warmington, Janet Stevens and friends and family. He did not immediately respond when asked which family and friends attended.

Pastor Worsley did speak about the protests saying his heart is burdened.

He spoke about the right to protest including in the 1950s and before that and last summer.

“What is discouraging is this…Why do we have to do it at the expense of someone else? Why do we – when we protest – it has to exclude someone else,” Worsley asked.

He asked for prayers for the families of people who died in Washington Wednesday.

Sununu’s inaugural address can be viewed tonight (Thursday) at 7 p.m. via a YouTube livestream here and on WMUR and NHPR.