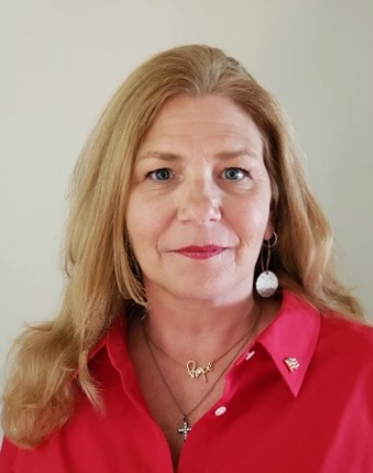 “I have no comment,” Johnson said when reached by phone on Friday.

Johnson, who also serves on the Laconia School Board, engages in debunked theories about the November presidential election online, and she recently shared an article from the notorious Neo-Nazi website, The Daily Stormer, pushing a conspiracy theory about the presidential election in Georgia. Included in the article was an altered racist and anti-Semitic image.

In an apology posted to her social media accounts, Johnson apologized for sharing an article from the Neo-Nazi website, saying she was unaware of the source of the article.

“I have removed the report as it came from a source I do not agree with and thanks to a couple of people who showed me,” Johnson wrote.

Johnson herself initially complained on social media after the post was removed from her Facebook account. She included a screenshot that details the link to the article, showing it is coming from The Daily Stormer.

The Daily Stormer is operated by Neo-Nazi Andrew Anglin, who shares Johnson’s enthusiasm for President Donald Trump. Anglin came out strongly in favor of Trump before the 2016 election and continues to support him on Daily Stormer.

“Jews, Blacks and lesbians will be leaving America if Trump gets elected—and he’s happy about it. This alone is enough reason to put your entire heart and soul into supporting this man,” Anglin wrote.

Daily Stormer includes a demographic chart that keeps track of how “non-white” the U.S. population is becoming on its home page, as well as numerous articles trading in anti-semitism, racism, misogyny, and various conspiracy theories about the election and the COVID-19 pandemic.

Johnson has expressed skepticism about the pandemic and has entertained conspiracy theories about the potential vaccine for the illness on her social media pages.

“The New Hampshire Republican Party has become a place where people like Dawn Johnson can share hateful, racist, and anti-semitic posts without repercussion because Chris Sununu and the NH GOP are incapable of holding the members of their party responsible for their words and actions. NH GOP leadership and Sununu must call on Johnson to resign immediately,” Buckley said.

A representative for Sununu did not respond to a request for comment.