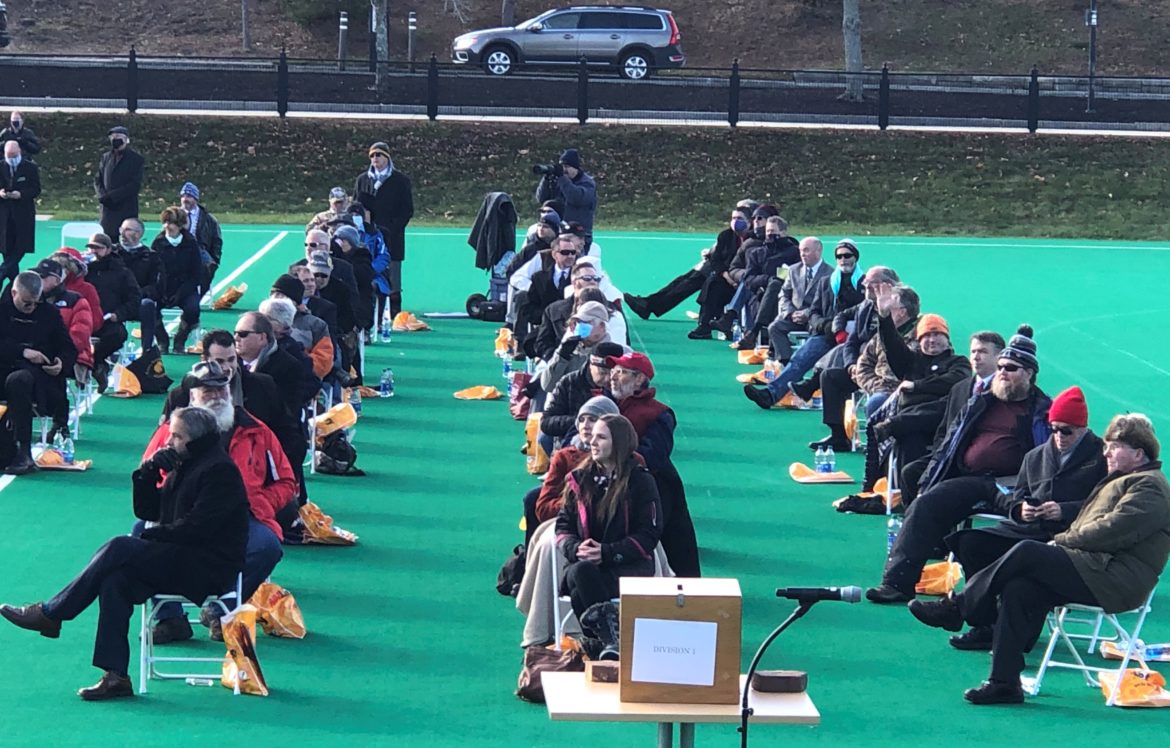 A separate section was used for House members who chose not to wear a face covering at Organization Day outside at UNH in Durham on Dec. 2.

CONCORD – Gov. Chris Sununu gave an update on the state’s increasingly perilous COVID-19 situation Thursday and Democratic leaders asked him for testing for all legislators who attended Organization Day in the wake of House Speaker Dick Hinch’s death on Wednesday.

Foremost on Sununu’s mind at his regular news conference Thursday in Concord was Hinch’s death to COVID-19, which he called a “cautionary tale” and reiterated the importance of wearing masks. He said Hinch’s death has hit home for many legislators in the last 24 hours.

“It isn’t about state government at all,” Sununu said. “Unfortunately Dick’s passing as really tragic as it is, as heartbroken as we all are, it really is a warning sign that we are far from over this.”

About 80 seats were set apart for GOP House members who did not wear face masks on Organization Day outside at UNH in Durham on Dec. 2, but it was unclear if they were all filled. The House clerk’s office said there is no master list of lawmakers who requested seating in the maskless section.

Masks have been a contentious issue with a number of Republican legislators who oppose Sununu’s mask mandate and other actions he has taken to curb the spread of COVID-19.

Sununu said everyone should be concerned that this virus has a very aggressive attack rate. It can be very asymptomatic. “If anyone has any thoughts, go get a test,” Sununu said.

Sununu called it “horribly irresponsible” for elected officials to choose not to wear a mask in public or while presiding at public meetings in defiance of his mask mandate.

Also on Thursday, the House and Senate Democratic leadership sent a letter to Sununu asking to provide accessible testing to all State House staff and all legislators who attended Organization Day.

“In the past 24 hours, we learned that Speaker Dick Hinch passed away from COVID-19 and that a staff member at the State House tested positive,” said House Democratic Leader Renny Cushing and Senate Democratic Leader Donna Soucy in the letter to Sununu.

New Hampshire currently leads every state in New England in positive test rate, increasing over 50 percent in the last two weeks, they wrote. “The deaths of Granite Staters have increased by 289 percent and hospitalizations by 84 percent a striking statistic memorializing lives who should be remembered so much more than a number,” the letter said.

At the news conference, Lori Shibinette, commissioner of Health and Human Services, said Hinch’s death will be investigated as any other priority case would be, including contact tracing.

There may be no more information made public on his case, depending on the date of the onset of Hinch’s symptoms and whether all close contacts are identified, she said.

“Beyond that the information shared will be based on public’s need to know so if there was an event that was attended or something like that that we aren’t able to identify all the close contacts then we would do a public notification,” Shibinette said.

If the onset of his symptoms was the day after Organization Day then the state would go through and identify all the close contacts for that day, she said. “It just depends on where the case investigation leads to,” Shibinette said.

“If onset of symptoms was yesterday or the day before we may not go all the way back to Organization Day,” she said.

Shibinette said she didn’t have a date for the onset of Hinch’s symptoms and wouldn’t release it publicly if she did.

“We have to remember that although he is a public figure there is a right to privacy when it comes to protected health information. The only way we would ever release anything (like that) is if there is a very clear public need to know and right now we’re not seeing that,” Shibinette said.

This all comes as Dr. Benjamin Chan, state epidemiologist, said at the news conference that there were 695 new cases Thursday for a total of 6,303 active cases, 14 new deaths and 248 people currently hospitalized.

There are 14 new outbreaks at long-term care facilities.

The percent positivity rate is 9 percent, up from 7 percent last week, he said. Chan also stressed that the vaccine is highly effective and no corners have been cut to get it into the arms of the public.

Sununu said there will be no mandate to take the vaccine.

Sununu said some hospitals in the state are beginning to cancel elective procedures and are working together to address the crisis. He said in the spring, hospitals voluntarily scaled back services and the state provided guidance for reopening in May.

The state has five surge hospital locations that could be up in a matter of hours, “but we are not there yet,” Sununu said.