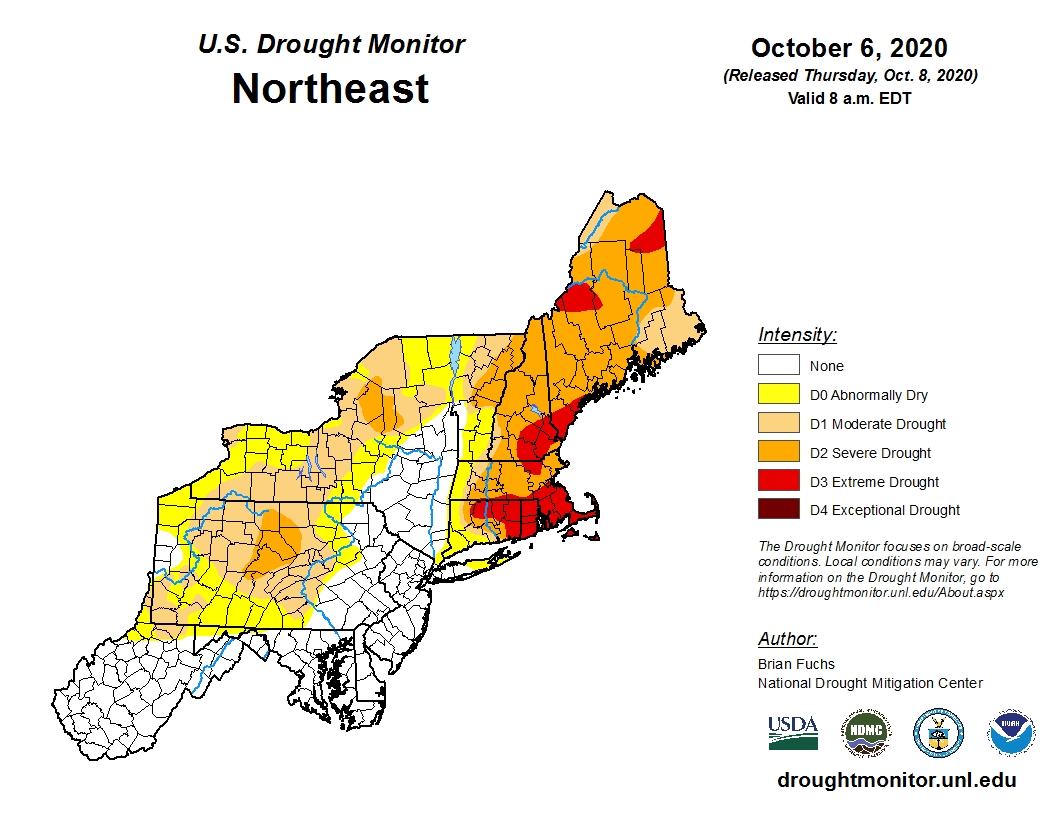 It’s been a tough year for well owners in New Hampshire, but help may be on the way.

O’Donovan, speaking Oct. 14 as part of the Coffee and Conversation discussion series organized by the Carsey School of Public Policy at UNH, N.H. Bureau of Education and Training, and the N.H. Association of Certified Public Managers, told those listening,

“We have enough concerns now that the governor and the department have worked together to develop a program, the first of its kind in the state, to assist residential well owners, and that is going to be proposed tomorrow (Oct. 15) to a trust fund that has funds available for these kinds of problems and begin to develop a program to address this program for people who are severely impacted.”

O’Donovan said monitoring wells that are located across the state are indicating that the current drought conditions are affecting groundwater levels everywhere. “To summarize, they’re all red, which tells you that groundwater levels are low,” he said.

Parts of New Hampshire are still in “extreme drought” conditions, especially in the south and southeastern portions of the state, including Strafford County.

The heavy rains of the past two days helped, but we’re still a ways from seeing the dry conditions improve.

As to when the drought might end, O’Donovan said no one can predict that.

“We do know that the rain we just received the last couple of days, really the last day and a half, came in a little more than forecast, which was a big change from the rest of this year because most of the forecasts had been coming in light,” he said.

“They would forecast an inch and we’d get a half-inch. This one came in, they forecast an inch, and we actually got an inch and a half in some areas. So that’s a good start to ending the drought. The next storm that’s going to come through Friday and Saturday looks like it’s going to bring about 2 inches, and if that actually occurs and comes in as forecast, that actually begins to move us off of the drought.”

Parts of New Hampshire have been in what’s classified by the U.S. Drought Monitor as a D3 condition, affecting about a third of the population of the state,  since Sept. 22. That’s when farmers experience major crop and pasture losses, and widespread water restrictions are imposed. The next level, D4, is the most serious level, or “exceptional” drought conditions, and New Hampshire last experienced that in 2016.

“Most of our calls are from people who have dug wells,” O’Donovan said. “Those are the old style well, three-foot diameter, dug in with an excavator or back in the 1800s dug by hand. And they just go down 10, 20, 30 feet down to a water-bearing layer, and many of the dug wells that were dug back in the 1800s, the 1900s, had gone 100 years without ever going dry. And then in this drought because we had such a low snow pack and groundwater levels are lower than we’ve seen in many other droughts, a lot of those dug wells are drying out.”

“We regulate over 2000 systems, including 705 Community Water Systems, of which about 165 currently have water restrictions in place due to the drought. Most of those are using mandatory restrictions,” he said.

He did indicate that brush fires haven’t been a particular problem during the drought.

“We’re actually down a little bit in total acreage burn, and we believe that is due to people being really cautious,” he said. As of last month, he said the state has had 207 fires and 83 acres damaged.

He said there are about 20 big water well contractors who do about 80 percent of the business in the state and another 80 that do the other 20 percent. “They have a big backlog right now,” he said. “In fact, some well drillers tell us they’ve got  a three-month backlog right now, so if you run your well dry  and you think you’re going to call up a well driller who’s going to come in the next day and drill that well deeper by a couple of hundred feet and get you water again, no, that’s not going to happen because there’s somebody who’s been dry for a couple of months who’s already ahead of you in line.”

He said his department advocates conservation.

“Conserving your water doesn’t start when your well goes dry,” he said. “That’s too late. That’s like buying a fire extinguisher after your house fire has started. That’s pointless. … You’ve got to conserve water while you have water because once you go dry, you’re in a whole different problem set.”

Those who think bringing in a tanker truck of water will solve their problem are mistaken, he said.

“A lot of people think if my well goes dry at my house, I’ll just go whistle up a tanker truck of water, pump that water down into the well, and then I’ll be good. And that is not the case. There’s a variety of problems with that approach,” he said.