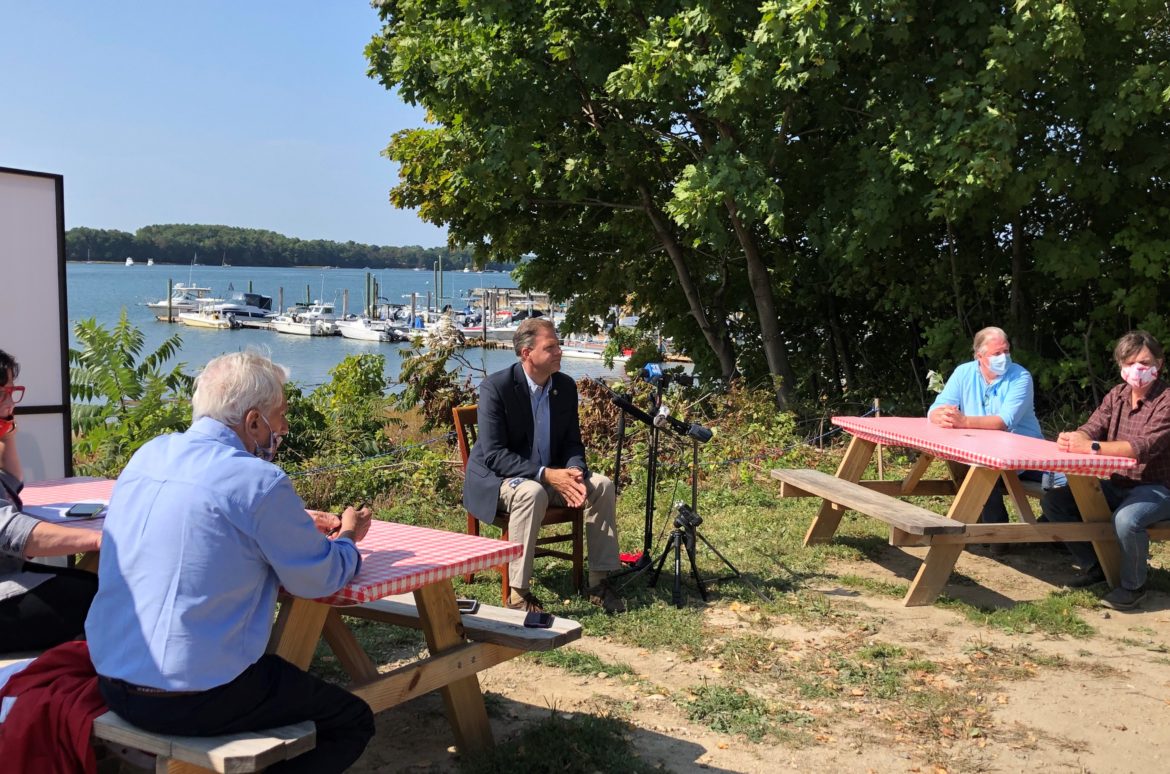 DOVER – Restaurant owners across southern New Hampshire held a roundtable discussion with Gov. Chris Sununu Friday to discuss their struggles during the pandemic.

They learned that he may try to help again financially to help them try to survive to next spring. The meeting was at Newick’s Lobster House in Dover.

It may be an infusion of federal capital but it could also mean a possible reduction in the state’s rooms and meals tax, if the legislature is willing to go along with that, Sununu said.

“I’m trying to get you through this as best I can,” while also protecting the public from the spread of COVID-19, Sununu said.

Participants at the outdoor roundtable were the event’s host Steve Newick of Newick’s Lobster House; George and Carol Lawrence of the Red Arrow Diner;  Jay McSharry of Jumpin’ Jays, Moxy, Vida Cantina, and Dos Amigos; Stacey Marchionni of the Revolution Tap Room; Brian Shea of The Barley House in Concord and North Hampton; and Evan Mallet, The Black Trumpet in Portsmouth.

On Thursday, Sununu announced that he was relaxing some of the regulations as of Oct. 1. Instead of requiring six feet of distance between restaurant tables at 100 percent capacity, he would allow the construction of plexiglas or non-porous panels to be erected between seating up to six feet in height to prevent the virus from spreading.

George Lawrence, owner of the Red Arrow Diner in Manchester and Nashua, said Sununu’s decision this week to allow for physical barriers between tables rather than a six-foot distance is a godsend that may help his family’s business survive.

For many diners like his which are configured primarily by booths, the plexiglass partitions will mean that the business can increase from a capacity of 40 to 80 percent.

“I am elated,” he said after the roundtable.

Mike Somers, president, and chief executive officer of the New Hampshire Restaurant and Lodging Association, said restaurants have been hit particularly hard by restrictions imposed by the governor to protect the public from the spread of the deadly virus.

It has been identified as one of the hardest-hit sectors of the economy.

Somers noted restaurants represent about a $4 billion a year state industry, provide in a normal year about $350 million in rooms and meals tax, and employ 70,000.

“We lost 35,000 employees,” in March when stay-at-home orders were put in place and that 50 percent drop in employment has had a major impact, Somers said.

He noted that revenues of April, for example, were 25 percent of what they normally would be.

Slowly the state has opened the restaurants first in the northern areas of the state not as hard hit as the south, and in June, Sununu allowed restaurants to not only have outdoor seating but to go to 100 percent capacity statewide provided that parties could be seated six feet from each other.

Sununu extended federal CARES Act money to the industry through a number of programs he established including the Main Street and GAP programs and said he will likely need to decide by mid-October how to spend about $250 million left in unallocated CARES Act funds.

Somers said there have been more than 100 restaurants that have closed, but he is unsure of the final figure.

Somers said the barriers are “the difference between making it through the winter,” and said he feels if a restaurant can make it to the spring, “they think there is a chance to survive.”

Many said the issue for them is consumer confidence and they have had to be creative in providing options to dining-in, including more internet take-out options, touchless catering, and other measures.

They thanked the governor for allowing for wine and beer to be sold on a take-out basis and asked him to consider take-out cocktails, perhaps by using sealed Mason jars.

Sununu said he would think about it. Twenty-three states now allow for such takeout, they said.

They had on display an example of a plexiglass barrier but Sununu noted any non-porous surface, including a painted piece of wood which is up to six feet in height would do the trick.

Sununu said he expects the pandemic to go on past the time when a vaccine may be announced and noted that he felt restaurants should prepare for such disruption in their normal business until at least next spring.

He said state revenues are improving and with the legislature’s help, would be willing to consider a reduction in the state’s rooms and meals tax to help.

He suggested businesses keep track of how much they are making now, what they project to make, and the difference from a typical year to help make them ready to accept more funding help that may be available before the end of the year.